TORONTO — Kendrys Morales just missed getting in on the Blue Jays' home run fun in the fourth inning. He made sure the ball got over the fence when he stepped up to the plate in the eighth.
May 30, 2017 11:31 PM By: Canadian Press 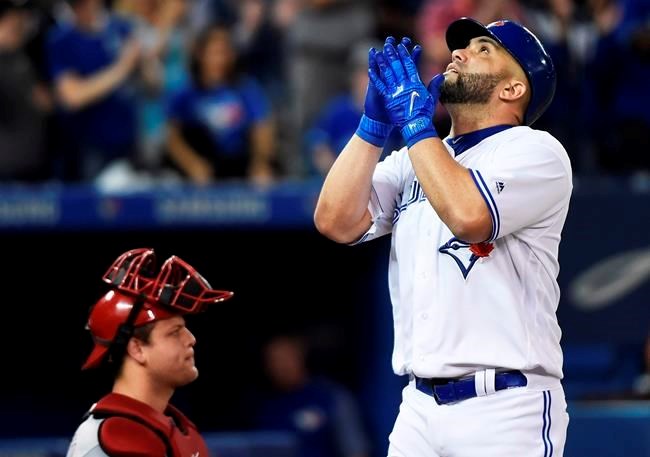 TORONTO — Kendrys Morales just missed getting in on the Blue Jays' home run fun in the fourth inning. He made sure the ball got over the fence when he stepped up to the plate in the eighth.

Morales delivered a go-ahead two-run homer to power Toronto to a 6-4 victory over the Cincinnati Reds on Tuesday night.

"I was looking for a big swing and I got a good pitch to swing (at)," Morales said through a translator. "So I got it all."

The Blue Jays scored their other runs off Reds rookie Asher Wojciechowski in the fourth. Josh Donaldson got things started with a two-run bomb that reached the 500 level and Jose Bautista followed with a no-doubt solo shot.

Morales nearly made it back-to-back-to-back jacks but his rainbow flyout landed just short of the fence in right field. Russell Martin hit his fifth homer of the year later in the frame.

Joe Smith (1-0) got three outs in the eighth inning for the win and Roberto Osuna worked a 1-2-3 ninth for his 10th save.

Toronto has won seven of its last eight games and improved to 4-1 on its 10-game homestand. The Blue Jays (25-27) will go for a sweep of the three-game interleague series on Wednesday afternoon.

Donaldson became the ninth different Blue Jay player to reach the 500 level at Rogers Centre and first to do so since Edwin Encarnacion did it in April 2015.

"It's hard to really give a great explanation of it because there's really nothing that's similar to it that I've experienced," Donaldson said. "When you are able to accomplish that, it feels really nice."

Toronto made some nice defensive plays to keep the Reds from building any momentum. Troy Tulowitzki made some great plays at shortstop and Ezequiel Carrera made a brilliant diving catch in the seventh inning.

"When the plays had to be made, they made every single one," said Reds manager Bryan Price.

In the eighth, Morales turned on a pitch from Blake Wood (0-3) for his 10th homer of the year. Bautista also reached the 10-homer mark and the Donaldson blast was his third of the season.

The Reds (24-27) hit three homers of their own. Zack Cozart and Toronto native Joey Votto hit back-to-back solo shots off Blue Jays southpaw J.A. Happ in the first inning and Cozart added another homer in the fifth.

Toronto reliever Ryan Tepera gave up an RBI single to Billy Hamilton in the seventh inning for Cincinnati's other run. That tied the game and ended Tepera's scoreless inning streak at 19 frames.

Happ, meanwhile, worked four innings in his first start since a six-week stint on the disabled list with an elbow injury. He threw 48 of his 81 pitches for strikes.

"It was a battle," Happ said. "I expected that my first time getting back out there. But I was able to settle down after those couple runs in the first and got out of a couple jams.

"I'll get better with command, that's going to come I think. But physically I felt good."

Announced attendance was 32,747 and the game took two hours 53 minutes to play.

Notes: Toronto second baseman Devon Travis had his hitting streak end at 13 games. ... The Blue Jays confirmed they plan to start Francisco Liriano on Friday against the New York Yankees. He has been on the DL since May 11 due to a shoulder injury. Joe Biagini is now tabbed to start Saturday with Marcus Stroman set for Sunday. ... The Blue Jays optioned reliever Dominic Leone to triple-A Buffalo to make room for Happ on the roster. ... The Reds recalled right-hander Jackson Stephens from triple-A Louisville before the game and optioned Robert Stephenson to the Bats.