EDMONTON — It was one of the rare games this season that the Edmonton Oilers didn't need their top line in full force to earn a win.
Nov 9, 2019 12:37 AM By: Canadian Press 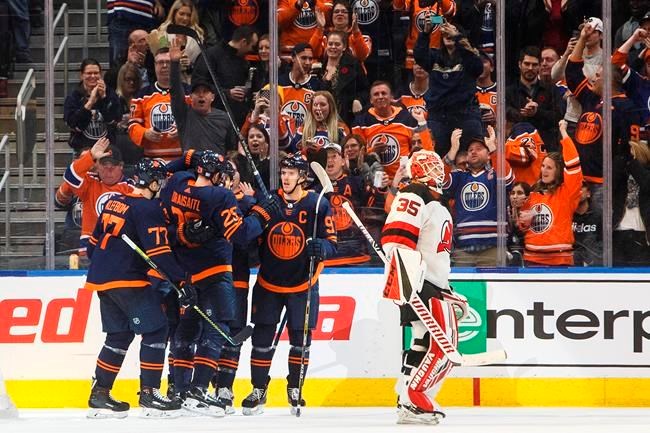 EDMONTON — It was one of the rare games this season that the Edmonton Oilers didn't need their top line in full force to earn a win.

Alex Chiasson had a goal and an assist and Mikko Koskinen made 26 saves for the shutout as the Oilers snapped a two-game losing skid with a 4-0 victory over the New Jersey Devils on Friday.

Leon Draisaitl, Gaetan Haas and James Neal also scored for the Oilers (11-5-2), who improved to 6-2-1 on home ice this season. Draisaitl and Connor McDavid were held to a point apiece after having to carry much of the load for the bulk of the season thus far.

“There were some guys who got on the board that were excited to do so,” said Oilers head coach Dave Tippett. “The other three lines really had an impact with their work in the game. That was a good part of it being a team win.”

Chiasson was relieved to finally be a contributor on the scoresheet, getting his first goal of the season after netting 22 for the Oilers last year.

“Contributions from different guys,” he said. “I’ve said this time and time again: when you have guys on any given night coming in and pulling on the rope, that’s what is going to make this team dangerous.”

“It’s a hard league and especially on the road you have to find your game early,” said Devils forward Taylor Hall . “Any kind of let up and a couple of bad shifts and it ends up in the back of your net.

"I thought we had some good sustained periods of time where we played well and probably maybe deserved a goal or two. But that can happen, especially on the road, especially against a team that are playing pretty dangerous right now and we didn’t seem to have an answer for that in the second period.”

There was no scoring in the first period with the best chance belonging to New Jersey when Hall rang a shot off the post behind Koskinen on a breakaway with nine minutes left in the opening frame.

Edmonton got on the board two minutes into the second period when Ryan Nugent-Hopkins sent Draisaitl in on a breakaway and he put a backhand past Devils goalie Cory Schneider.

With his 14th goal of the season, Draisaitl extended his points streak to eight games. Oilers defenceman Joel Persson also picked up his first NHL point on the play.

The Oilers added to their lead with four minutes left in the middle period when Haas tipped home a Matt Benning point shot.

Just 66 seconds later it was 3-0 when Neal picked up the rebound off a Persson shot in front and scored his 12th goal of the season.

The Oilers got a power-play goal six minutes into the third period as Chiasson tipped a Nugent-Hopkins shot past Schneider.

Both teams return to action on Sunday as the Devils conclude a five-game trip in Vancouver and the Oilers head on the road for a two-game set, starting in Anaheim.

Notes: Devils defenceman Sami Vatanen left the game with a first-period injury and did not return… The game featured five of the last 10 first-overall picks in the NHL in Connor McDavid, Jack Hughes, Nugent-Hopkins, Hall and Nico Hischier… The Oilers got a pair of forwards back from injury in Riley Sheahan and Josh Archibald… Coming back from an upper-body injury for the Devils was forward Jesper Bratt.

This report by The Canadian Press was first published Nov. 8, 2019.