LAS VEGAS — Floyd Mayweather Jr. will come out of retirement to meet UFC star Conor McGregor in an Aug. 26 boxing match that will feature two of the top-selling fighters in the world.
Jun 14, 2017 9:49 PM By: Canadian Press 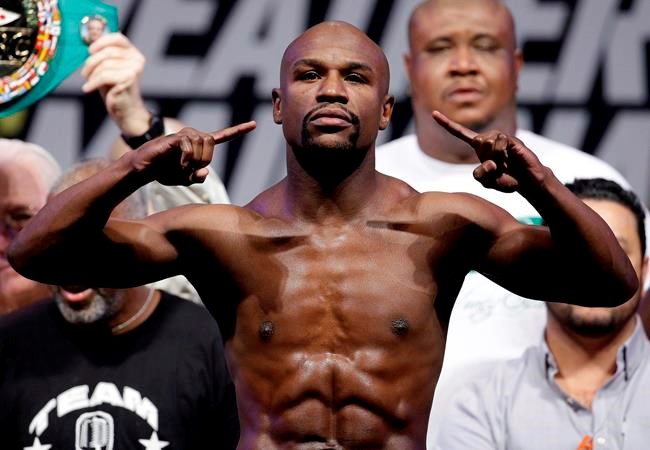 LAS VEGAS — Floyd Mayweather Jr. will come out of retirement to meet UFC star Conor McGregor in an Aug. 26 boxing match that will feature two of the top-selling fighters in the world.

The two fighters both announced the fight Wednesday, after months of speculation about whether Mayweather would return at the age of 40 to face a mixed martial arts fighter who has never had a pro boxing fight.

"It's official," Mayweather said on Instagram next to a video poster of both fighters.

"THE FIGHT IS ON," McGregor tweeted several minutes earlier, posting a picture of himself next to one of Mayweather's father, Floyd Sr.

Mayweather, who retired in September 2015 after winning all 49 of his pro fights, will face the Irish UFC superstar at the T-Mobile arena on the Las Vegas Strip. He had tweeted a picture of himself sparring in recent days to show he was already getting ready for the bout.

"This is really an unprecedented event," said Stephen Espinoza, who heads Showtime Sports, which will handle the pay-per-view. "Really we haven't seen anything in modern history that resembles it, it's impossible to predict how many sales this will do."

Espinoza said the fight came together quickly after McGregor and the UFC reached agreement last month on their end of the deal and Mayweather's team pushed for the fight in recent days.

"All parties were motivated and reasonable and thrilled we could get everything done," he said. "The sky's the limit on this."

Financial terms were not released, though Mayweather got the greater share of revenue when he fought Manny Pacquiao and is expected to have a similar percentage against McGregor.

Depending on pay-per-view sales, both fighters could earn huge purses, though probably not the $200 million or so Mayweather earned for Pacquiao.

McGregor, the wildly popular UFC star, is 21-3 in UFC fights, and is coming off a win in November against Eddie Alvarez. Though he hasn't boxed professionally, McGregor did box while growing up and is known for his striking expertise in UFC.

"The reason he's such a superstar is this guy will fight anyone, anywhere and at any time," UFC chief Dana White said about his fighter. "It's the right fight at the right place at the right time."

The two fighters are expected to do a press tour that should provide fireworks shortly before going into final training for the fight.

The cost of tickets and the price of the pay-per-view has not been decided, though the pay-per-view is expected to be at or near the $99.95 charged for Mayweather's 2015 fight with Manny Pacquiao that drew a record 4.4 million pay-per-view buys.

Mayweather will come off a two-year retirement in a bout that McGregor has been pushing for nearly that long. It finally came together and Nevada boxing officials on Wednesday approved the date for a Mayweather Promotions bout.

Mayweather last fought in September 2015, beating Andre Berto and then announcing his retirement. His fight before that, a decision win over Pacquiao, was the richest in boxing history and reportedly made him more than $200 million.

Though oddsmakers make Mayweather a big , the thought of the fight has excited many in the MMA world. It has also intrigued some in boxing, though most dismiss McGregor's chances under boxing rules against one of the greatest defensive fighters in history.

Adding to McGregor's challenge the fighters will be using 10-ounce boxing gloves instead of the smaller UFC gloves and he will not be allowed to use the leg kicks or takedowns that are used in mixed martial arts.

Even if the actual bout may not shape up as a great matchup, the run-up to the fight will. Both fighters are noted for their ability to sell their fights, and both have exchanged in trash talking and more to promote their bouts.

"As with every Mayweather and McGregor fight part of the appeal is the spectacle and outsize personalities who are participating in it," Espinoza said.

The pay-per-view revenue for the event would likely gross tens of millions of dollars. It comes less than a month before Gennady Golovkin and Canelo Alvarez meet in a highly anticipated fight Sept. 16 that could rival it for pay-per-view buys.