TORONTO — As the individual accolades pile up for Jeremiah Masoli, the Hamilton Tiger-Cats quarterback is quick to give credit to those who help make him look good.
0
Nov 8, 2018 5:08 PM By: Canadian Press 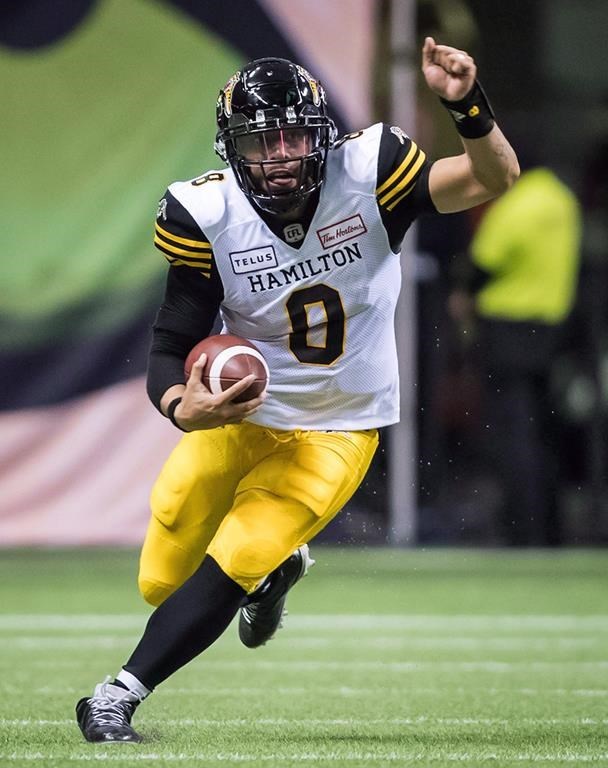 TORONTO — As the individual accolades pile up for Jeremiah Masoli, the Hamilton Tiger-Cats quarterback is quick to give credit to those who help make him look good.

Masoli was named the East Division nominee for the CFL's outstanding player award Thursday. It came a day after Masoli captured his first-ever division all-star nomination.

"I feel like this about any individual awards in football, it's obviously a huge team deal," Masoli said. "I can't do all these things without the line blocking for me, the receivers getting open and all that stuff.

"It's a true team game and I just give all the props to my coaches and teammates."

Calgary Stampeders quarterback Bo Levi Mitchell is the West Division nominee. Voting was conducted by the Football Reporters of Canada and nine CFL head coaches with the winner being named Nov. 22 in Edmonton.

Masoli was also the league's second-leading rusher among quarterbacks with 473 yards. He anchored the CFL's top offence (405.6 yards per game) despite an ever-changing receiving corps as veterans Shamawd Chambers, Chris Williams, Jalen Saunders, Terrence Toliver and Brandon Banks all suffered season-ending injuries during the campaign.

But of more importance to Masoli is Hamilton's East Division semifinal showdown Sunday against the B.C. Lions.

"For those honours, you can (feel pride) for sure but I think that's a post-season type of deal," Masoli said. "We've got to be locked in on B.C. right now.

"Those things are definitely nice to look back on after you're done but right now we can't let it be a distraction."

Mitchell, the '16 award winner, registered his second career 5,000-yard season (5,124) with a league-high 35 TD strikes. Like Masoli, Mitchell played through many injuries to Calgary's receiving corps in leading the Stampeders (13-5) atop the West Division.

"It's definitely a year I'm proud of everybody for what we've done . . . but you hang your hat on championships and that's what we're striving for," Mitchell told reporters in Calgary. "MOP is an individual award that goes out to an entire team.

"It's an award for all of the O-linemen, everything they've done this year keeping me upright and they've had to work even harder with what's happened with the receivers and me having to hold on to the ball a little bit longer. All the work the receivers put in, the coaches, running backs everything everybody has done throughout the entire year. It's been an entire group effort and definitely very very honoured for it."

"He's fought through some of the things that I have this year with receivers and everything," Mitchell said. "I think he's had just a hell of a year and has really made that offence his own."

"Larry, to me, is just a true leader and what I think of as a middle linebacker," said Hamilton coach June Jones. "All the great ones have the leadership that he has and the ability to make plays and get guys lined up.

Harris and Bryant are trying to win their respective honours for a second straight season.

The six-foot-four, 301-pound Revenberg, of Essex, Ont., completed his third season with Hamilton. Taken third overall in the '16 draft, the 25-year-old anchored an offensive line that protected Masoli and contributed to the CFL's second-best passing attack (310.7 yards per game).

"It's one of those things you feel very honoured to be in this position," he said. "It means all the hard work has been paying off.

"The way (Hamilton) transitioned me, they made sure I didn't lose my head at all, I kind of focused and understood along the way. It started with some reps now and then kind of rotating sometimes and at the end of it, starting."

The five-foot-10, 230-pound Bighill has enjoyed a banner first season with Winnipeg. In addition to 105 tackles, Bighill had four sacks, two interceptions and league-best four forced fumbles in becoming the first Bomber nominated for this award since Jovon Johnson in 2011.

Harris led the CFL in rushing for a second straight year, registering a career-best 1,390 yards. The Winnipeg native also had 58 catches for 451 yards and scored 11 TDs.

Sinopoli posted a record-setting campaign with Ottawa. The 30-year-old native of Peterborough, Ont., had a league-high 116 catches — a single-season record for a Canadian — with 1,376 yards and four TDs and was a finalist to Harris last year.

Bryant led another solid season for Winnipeg's offensive line. Not only did Harris top the rushing race but the Bombers scored a CFL-best 53 offensive touchdowns and allowed 36 sacks, tied for third-fewest in the league.

Williams-Lambert was Saskatchewan's receiving leader with 62 catches for 764 yards and four TDs.

Campbell and Jones first squared off for top coach honours in 2015 when Campbell earned the honour. Ottawa (11-7) finished atop the East Division while Saskatchewan (12-6) was second in the West Division.