TORONTO — The Toronto Blue Jays didn't wait long to respond after Joe Smith blew his first save of the season Wednesday night. Tampa Bay scored three runs off the Toronto reliever to tie the game in the eighth inning.
Jun 14, 2017 11:43 PM By: Canadian Press 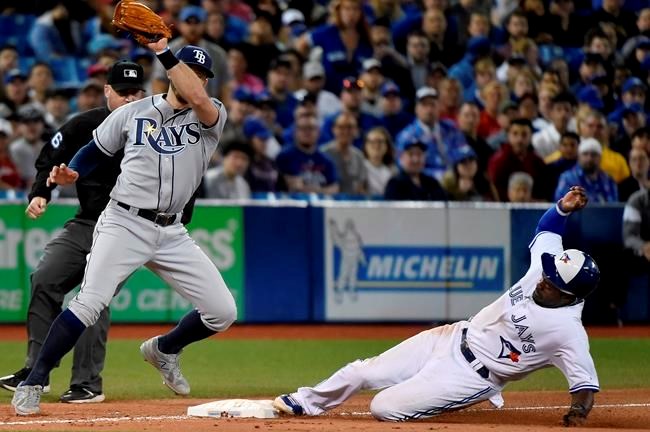 TORONTO — The Toronto Blue Jays didn't wait long to respond after Joe Smith blew his first save of the season Wednesday night.

Tampa Bay scored three runs off the Toronto reliever to tie the game in the eighth inning. Russell Martin then led off the bottom half of the frame with a tiebreaking solo shot to help the Blue Jays to a 7-6 victory.

"I felt like I picked him up right there and I felt like the team at that moment needed that," Martin said. "So it was just a nice bounce-back win. A collective win. I feel like we kind of battled that one out."

Francisco Liriano struck out nine over seven innings, allowing two earned runs and five hits. Smith (3-0) got the win with one inning of work and Roberto Osuna closed it out with a 1-2-3 ninth for his 17th save.

The victory came after Tampa Bay dumped Toronto 8-1 a night earlier. The split of the two-game mini-series left the Blue Jays (32-33) one win away from the .500 mark.

Martin belted an 0-1 pitch from reliever Jose Alvarado (0-1) for his sixth homer of the year. It was the second loss in eight games for Tampa Bay (35-33).

"You could tell Martin's approach from the first pitch what he was trying to do, and he made an adjustment, got a pitch he could hit and knocked it out of the park," said Rays manager Kevin Cash.

Logan Morrison hit a two-run shot for the Rays in the eighth.

Before the game, the Blue Jays placed outfielder Ezequiel Carrera on the 10-day disabled list with a right foot fracture. Triple-A callup Dwight Smith Jr. got the start in left field and had three of Toronto's 10 hits.

Liriano, meanwhile, worked past the sixth inning for just the second time this season.

"Shoot, he was dynamite," Gibbons said.

The veteran southpaw did well to escape in the fourth inning after loading the bases with nobody out. Taylor Featherston drove in Mallex Smith with a sacrifice fly before Liriano fanned Peter Bourjos to limit the damage.

Ryan Goins led off with a single and moved to third when Featherston couldn't corral a Kevin Pillar grounder at second base. Jose Bautista drove in Goins with a single and Morales put Toronto ahead with his 13th homer of the season.

The Blue Jays tacked on another run in the sixth inning thanks in part to some poor Tampa defence.

After Martin singled, Smith Jr. hit a pop-up that the Tampa players couldn't track in the evening sky. The ball dropped in shallow left field.

Goins moved the runners up a base with a sacrifice bunt and Martin scored on a wild pitch.

In the eighth, Smith gave up a single to Evan Longoria before Morrison tagged his 19th homer of the year. Steven Souza Jr. walked, moved to third on a pinch-hit single by Colby Rasmus, and tied the game when Derek Norris hit a sacrifice fly.

"They've got a lot of guys with power in that lineup too," Gibbons said. "They can strike pretty quick."