MANCHESTER, England — Manchester City striker Sergio Aguero confirmed he broke a rib after being involved in a car accident in the Netherlands two days before his team's biggest Premier League game of the season so far.
0
Sep 29, 2017 6:19 PM By: Canadian Press 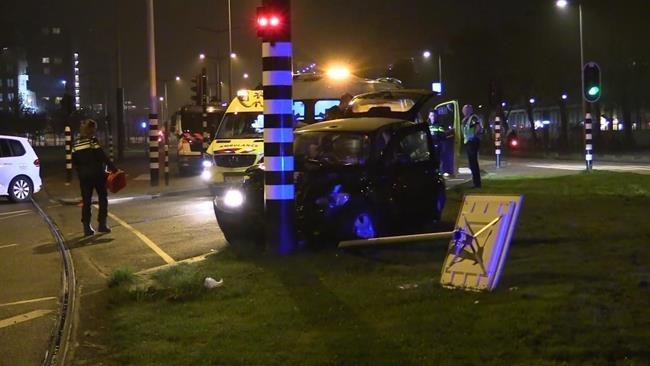 MANCHESTER, England — Manchester City striker Sergio Aguero confirmed he broke a rib after being involved in a car accident in the Netherlands two days before his team's biggest Premier League game of the season so far.

Aguero attended a concert in Amsterdam on Thursday evening and was on his way to the airport for a private flight back to Manchester when the taxi he was in crashed into a lamp-post.

The Argentina international spent the night in the hospital before returning to Manchester on Friday. He will not be available for the match against Chelsea in the Premier League on Saturday and is expected to be out for up to a month.

The accident happened at 11 p.m. local time, on Aguero's day off. City had scheduled its training session on Friday for 11 a.m.

"The taxi I was riding made a wrong turn and crashed against a pole," Aguero said on Twitter. "It was a very heavy slam but seatbelts prevented it from being worse."

Asked if he had given Aguero permission to be in Amsterdam, City manager Pep Guardiola said: "I'm not the police."

"I want the players to be happy," Guardiola added. "They have to rest mentally and physically and they have to enjoy their lives. If he decides to go there, that's OK with me."

On Thursday, Aguero posted a picture on Instagram of himself alongside Colombian singer Maluma, saying: "Thanks for the invitation!"

Maluma was performing in Amsterdam on Thursday evening.

The absence of Aguero for the Chelsea match is another blow for Guardiola, coming a day after City confirmed that left back Benjamin Mendy had ruptured the anterior cruciate ligament in his right knee.

Guardiola said Mendy would be out until the semifinals of the Champions League, which begin in April. The France defender has added a new dimension to City's attacking play this season with his powerful runs and delivery from the left wing.

City captain Vincent Kompany will also be absent, with Guardiola saying the defender hasn't taken part in a single training session over the last month.

Aguero lost his status as first-choice striker at City last season following the arrival of Gabriel Jesus. However, he has been in good form this season, scoring seven goals in eight games in all competitions.

He was selected in Argentina's most recent squad for upcoming World Cup qualifiers against Peru and Ecuador.

City leads the Premier League on goal difference after six games, with Chelsea three points behind in third place.

Steve Douglas is at www.twitter.com/sdouglas80