Laval player suspended for head hit, but not the one that decked Concordia quarterback

MONTREAL — Even if the player who dazed him with a high hit got off, Trenton Miller is glad he took to social media to spread the word about concussions and hits to the head.
0
Sep 29, 2017 6:35 PM By: Canadian Press 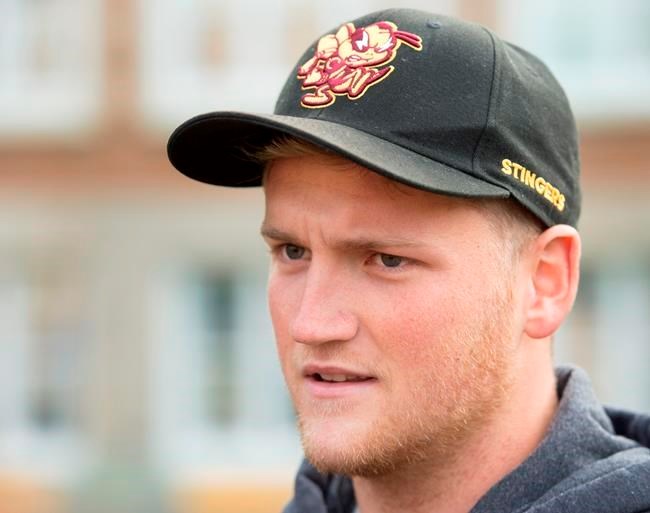 MONTREAL — Even if the player who dazed him with a high hit got off, Trenton Miller is glad he took to social media to spread the word about concussions and hits to the head.

The Concordia University quarterback, whose video pleading for greater player safety in football went viral this week, wasn't disappointed that Laval Rouge et Or defensive back Gabriel Ouellet was spared a suspension after a review by the FSEQ, the body that oversees high school, college and university football in Quebec.

Rouge et Or defensive back Kevin McGee was suspended one game for an even nastier hit on Concordia slotback James Tyrrell later in the game.

"I think it's awesome that they took the time to consider player safety, they kind of understand now where they have to go in the future with it," Miller said Friday. "Just seeing all the positive response I got, publicly and privately.

"They were happy I spoke out about it."

A statement released Friday from FSEQ football commissioner Benoit Doloreux said a review of video and written evidence found that there was no intent to injure when Ouellet brought down Miller in the third quarter of the Rouge et Or's 12-8 home win on Sept. 24.

As of Friday, more than 55,000 people had watched the video, which included replays of the two incidents.

"I didn't expect that," Miller said. "I expected maybe a couple of hundred views and a few shares, but if I can be the face of it and help some people, that's great."

"It's not about me. It's about player safety in the RSEQ in general and in football, whether or not someone was suspended. I'm sure he didn't do it intentionally, that's why it's hard to have a rule that judges intent. It's just a step we need to take to make it safer."

He also wanted to draw attention to head injuries and especially to raise awareness among young quarterbacks not to ignore concussion symptoms.

The current rule leaves it up to referees to judge if a player intended to injure an opponent before ejecting him from a game. Miller hopes the conference will change the rule so that all hits to the head are called and become subject to review for further discipline.

Miller was running with the ball on the play when he was hit high, from the side, by what appears to be Ouellet's shoulder. He returned later, but for only two plays when he and the team trainer decided he should leave the game.

Doloreux's statement said the hit was legal and that, because Miller was carrying the ball, he "was not considered to be in a vulnerable position."

Tyrrell was deemed to be vulnerable when McGee went straight in for a helmet-to-helmet hit just as the Concordia player caught a pass. The commissioner ruled that McGee committed a foul that deserved ejection from the game and therefore it carried an automatic one-game suspension. The Quebec City native is to sit out the Rouge et Or's game Sunday against McGill.

No penalty was called on the field for either play. Concordia requested the review.

"The ruling is backed by a desire to provide a safe environment for our student athletes," said FSEQ president and general manager Gustave Roel, who added that player safety "is a priority."

Miller, a Buffalo, N.Y., native, in his final year of football eligibility, made that same point.

In the video, he read a statement calling on the FSEQ to catch up to other leagues in cracking down on hits to the head and to "pursue player safety as the No. 1 issue.

He wasn't sure if he'd be cleared to dress this week, but said backup Adam Vance will start against Sherbrooke.

"I feel better day to day, no headaches," he said.

Miller was a prize catch for Concordia when he transferred in 2015 — a gifted quarterback and student with top grades who is completing a graduate degree in business. He was named the Quebec conference player of the year in 2015.

Laval issued a statement saying it would not appeal the decision. It said the Rouge et Or has never encouraged or taught dangerous play and would have no further comment.