VANCOUVER — Canadian striker Tosaint Ricketts is hoping he can be the offensive spark that the struggling Vancouver Whitecaps need.
0
Aug 13, 2019 4:27 PM By: Canadian Press 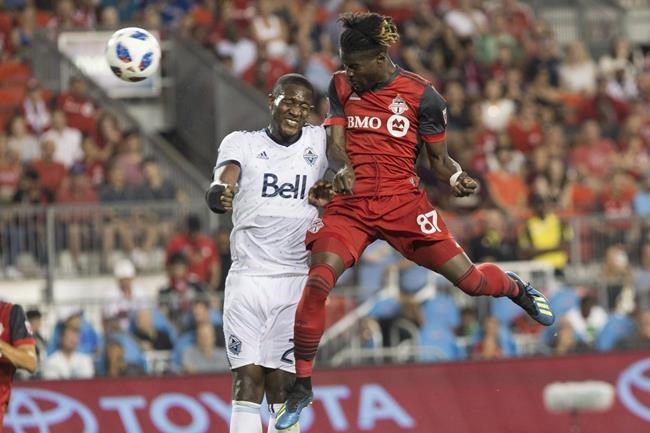 VANCOUVER — Canadian striker Tosaint Ricketts is hoping he can be the offensive spark that the struggling Vancouver Whitecaps need.

With just eight games left in the regular season, the 'Caps boast a dismal 5-12-9 record and have been desperately in need of consistent goal scoring all year.

"I know it's been quite a difficult season but I know there's been some bright spots as well and a lot of stuff to work on," Ricketts said Monday after training with his new teammates for the first time.

The 32-year-old has been playing in Lithuania this year, which he said made it difficult to watch Major League Soccer games.

Still, he's kept on top of what's happening with the 'Caps, knowing he wanted to join the squad and get back to the league where he spent three seasons with Toronto FC.

"I was always interested in the Whitecaps since I left TFC," Ricketts said. "I decided to go to Lithuania to get some minutes, get some goals, get some playing time. But once the Whitecaps came knocking, it was a no-brainer and I jumped right on it."

The deal he signed with Vancouver last week will see him play through the 2019 season, with a club option for 2020.

Adding Ricketts to the roster was a good "last minute opportunity" when some other deals fell through in soccer's summer transfer window, said Whitecaps coach Marc Dos Santos.

"We felt that Tosaint is a player that knows the market very well, won an MLS Cup with Toronto playing a role from the bench that was very important," he said. "He's a worker, he's a player that's there for the team, he wants to help the team and he wants to play his role to the best of his capabilities."

Ricketts proved to be an offensive force during his time in Lithuania, scoring eight goals in 15 appearances.

Despite the success, he described the experience as "quite difficult," saying there was a large language barrier on the team because the Russian coach spoke very little Lithuanian and no English.

"The connection between me and the coach could get lost at times. But I did quite well with the adversity," Ricketts said.

The Edmonton native has had success on Canadian soil, too. He put away 15 goals and three assists in 58 games for TFC, and has scored 16 times in 59 outings for the national team.

When it comes to playing for Vancouver, Ricketts said he's excited to contribute in any way he can.

"I'm just here to do what I do — stretch the backlines, be dynamic, get on the end of those balls in the box and just keep the defenders on their heels," he said.

Scoring has been a struggle for the Whitecaps this season. The team has just 26 goals for in 26 games. Only expansion club FC Cincinnati has fewer (25 goals for in 25 games).

"I'm never going to put all the burden of offensive stretch and our offensive problems that we had during the season on him," the coach said.

The 'Caps also added a new winger in Honduran international Michaell Chirinos last week and Dos Santos said he expects the new faces to be pieces who can compliment the efforts of the team's existing forwards, including Yordy Reyna, Theo Bair, Lass Bangoura and Fredy Montero.

Ricketts knows that the final stretch of the season is an opportunity for him to secure his future in Vancouver, and he believes he has plenty of time to showcase his skills.

"I think eight matches is definitely enough to get in there, show what I can do and hopefully get some goals," he said.