MONTREAL — For most of their first five seasons in Major League Soccer the Montreal Impact were dominated by the New York Red Bulls, but that all changed with a playoff upset in an Eastern Conference semifinal last October.
Jun 2, 2017 2:48 PM By: Canadian Press 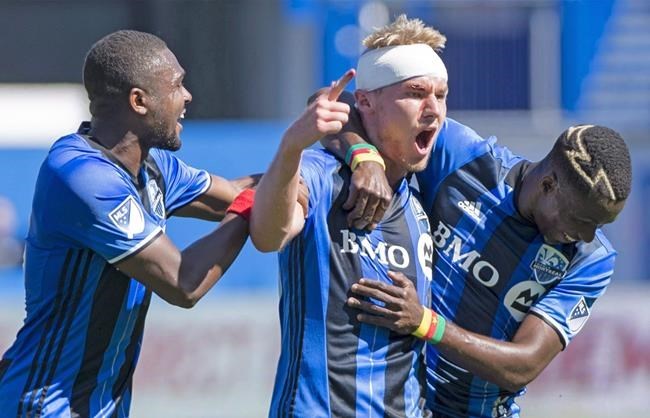 MONTREAL — For most of their first five seasons in Major League Soccer the Montreal Impact were dominated by the New York Red Bulls, but that all changed with a playoff upset in an Eastern Conference semifinal last October.

Now there's an intriguing rivalry building between the clubs as they get set for their first meeting of the regular season on Saturday night at Saputo Stadium.

The Impact (3-4-4) and the Red Bulls (6-6-1) have struggled to put wins together this season, but with each posting a victory in their last outing they will both be gunning to get a streak started.

"Whenever we play them it's a big game," said Montreal coach Mauro Biello. "Right now both teams are trying to climb up the standings, so that will make for an interesting game."

The Impact pounded 10-man Portland 4-1 in their last regular season outing two weeks ago and then beat Vancouver in a two-legged Canadian Championship series 5-4 on aggregate, with a 4-2 win in the second leg at home on Tuesday night. Ignacio Piatti had two goals in each game.

The Red Bulls are coming off a 2-1 win at home over New England, but have lost their last five away games.

They will try to end that run against the team that sent them home early last October. After winning the first semifinal leg 1-0 at home, the Impact pulled off 2-1 win at Red Bull Arena. New York midfield general Sasha Kljestan had a penalty stopped by Evan Bush and then had to go for repairs after having his nose bloodied in a collision with Marco Donadel in a heated second leg.

Donadel cautioned not to read too much into the playoff victory because the Impact are trying to play a different style this season — keeping possession and building attacks instead of playing for quick counterattacks.

"We didn't play well against them in New York, we just defended our advantage," the Italian midfielder said. "In the first leg, we were waiting for their mistakes.

"This is a different game. We want to build something. To keep the ball. To try to find space between the lines to find our best players."

"To be in the middle with two guys with experience, technique and good movement, it's very easy," said Donadel. "I just have to look for one of them and pass the ball. We are very comfortable now."

On defence, Kyle Fisher is expected to start even though regular centreback Victor Cabrera is ready to return from injury. The feisty 2016 first-round draft pick looks to have claimed the job while Cabrera and Hassoun Camara were out of action.

"Fisher's a guy who focuses on what he can control, who understands his limits," said Biello. "He comes in every day and works hard and listens and never says a word.

"It's paid off for him in terms of being ready for his opportunity. He's brought us a different element of aggressivity. The centreback that can match up physically against physical forwards."

New York certainly has one of those in rangy Bradley Wright-Phillips, who has scored in each of his last two matches.

While playing Canadian Championship games, the Impact slipped back into 11th and last place in the conference, partly because they have played at least two fewer matches than all but one other team. That's why games will stack up soon. From June 17 to July 5, they will play six times in 20 days, including the two-game Voyageurs Cup final against Toronto.

They start a run of three straight road games June 10 at Kansas City, where they will be missing seven players to international duty: Dzemaili with Switzerland, Ambroise Oyongo with Cameroon, Laurent Ciman with Belgium and Bernier, Anthony Jackson-Hamel, Wandrille Lefevre and goalie Max Crepeau with Canada.

Biello said Dzemaili will be given time off during the CONCACAF Gold Cup in July. The 31-year-old joined Montreal near the end of Bologna's Serie A season and has not had a break since last summer.

Midfielder Andres Romero, who has not played since the end of the 2015 season, has recovered from his latest knee injury and now needs only to get into game shape.