MONTREAL — It always seems to be hot and muggy when the Montreal Impact travel to Houston, which is one reason they have never won there.
0
Jul 4, 2017 3:41 PM By: Canadian Press 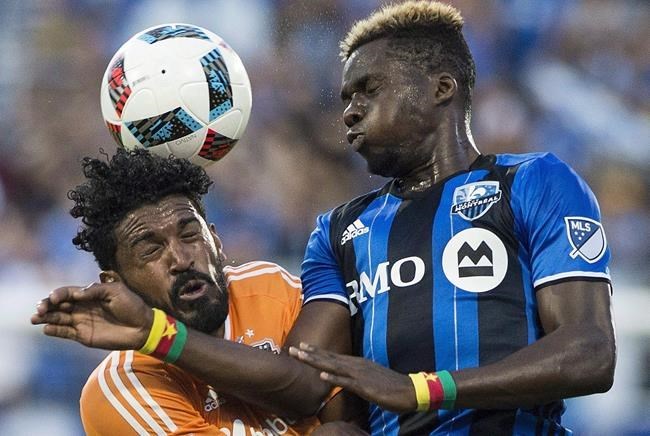 MONTREAL — It always seems to be hot and muggy when the Montreal Impact travel to Houston, which is one reason they have never won there.

But they hope to catch the Dynamo in a lull when the teams clash Wednesday night at BBVA Stadium in what is forecast to be sweaty 30 C heat.

And, like the Impact, they are missing three players to international duty at the CONCACAF Gold Cup — Honduran attackers Boniek Garcia, Romell Quioto and Alberth Elis.

"They're a team that's going through a difficult moment and wants to bounce back, so we have to be ready for that and for the conditions," Impact coach Mauro Biello said this week. "And we want to end on a good note before the mid-season break."

The Impact's sixth game in less than three weeks will be their last before MLS makes a mid-season pause for the Gold Cup. It also marks the end of the first half of the 34-game regular season for Montreal, which has played two games fewer than most other clubs. The Impact (5-5-6) hope to at least match last season, when they were 5-5-7 after 17 games.

It will not be easy. They will be missing scoring leader Ignacio Piatti for a second straight match with an adductor injury, while captain Patrice Bernier, forward Anthony Jackson-Hamel and backup goalie Max Crepeau are with Canada's squad at the Gold Cup.

Teenager Ballou Tabla is expected to stay in Piatti's spot on the left side up front with Blerim Dzemaili, Dominic Oduro and striker Matteo Mancosu.

They are also without left back Ambroise Oyongo, gone for the season with a knee injury, and his back-up Daniel Lovitz (cut knee), so rightie Chris Duvall will make a second straight start on the left side. It worked Saturday at Saputo Stadium, when Duvall scored his first goal in a 2-0 win over D.C. United on a sweet set-up from Dzemaili.

"They're very dangerous, but how many times have we had our backs to the wall and risen to the occasion?" Duvall said of the Dynamo. "It's the end of a long string of games, so we'll give it our best effort before we break off.

"They're a fast, athletic team, so it triggers our fight-or-flight. You either take up the challenge or you crumble. It'll be a test for us."

The Dynamo caught a break that will allow them to have scoring leader Erick (Cubo) Torres in the lineup. He was called up by Mexico this week to replace the injured Alan Pulidor at the Gold Cup but will join them only after Wednesday's game. With 12 goals, Torres is second in MLS scoring behind Chicago's Nemanja Nikolic with 16.

Houston is 7-0-2 at home, and got off to a torrid start while playing seven of their first 10 games at BBVA before cooling off in the past month when they've been mostly on the road.

The Impact have had just the opposite, playing most of their games away. But they've been a tough road team at 1-3-5, coming away with points in some difficult settings.

Then again, Houston is 5-0-1 all time at home against Montreal, outscoring them 12-3.

"It's a challenge but it's also something we're looking forward to because no one can stay undefeated forever," said Duvall, whose team will gets its chance to pile up points when they return from the mid-season break July 19 to begin a stretch of seven of nine games at home.