Canadian Matt Campbell is expecting a wild scene when he takes centre stage this weekend at the William Hill World Darts Championship in London.
Dec 12, 2019 7:50 AM By: Canadian Press 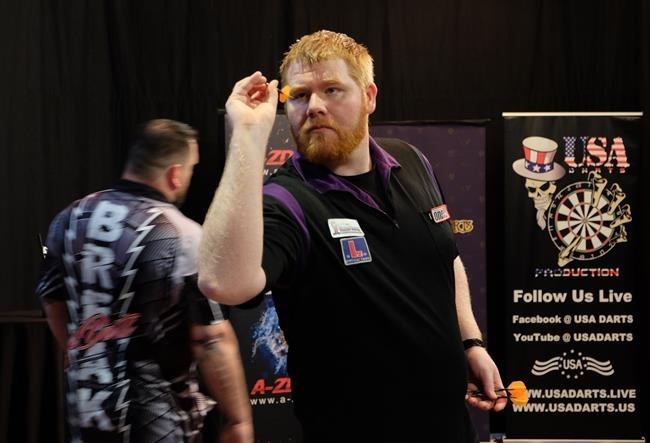 Canadian Matt Campbell is expecting a wild scene when he takes centre stage this weekend at the William Hill World Darts Championship in London.

Take a packed house at the 3,000-capacity Alexandra Palace, add fancy dress and some 750,000 pints of beer over 28 sessions/16 days of competition and you have one big party.

"I think it's going to be pretty crazy," Campbell said. "I don't think I'll have a handle on it until I actually get to the board and start playing my match. Then I think everything will go away and I get to do what I do."

Known as the Ginger Ninja due to his red hair, Campbell's entrance music at the tournament will be "HandClap" by L.A. band Fitz and the Tantrums.

The Canadian opens play Saturday against England's Mark (The Gladiator) McGeeney with the winner advancing to meet 32nd seed Ricky Evans of England. The 47-year-old McGeeney was runner-up at the 2018 BDO World Championship, a rival world championships.

Campbell is listed at 2,500/1 to win the tournament, with four others sharing the worst odds in the 96-man field. But whatever happens, Campbell is guaranteed his best-ever payday. The first-round losers collect 7,500 pounds ($13,040) at the tournament and Campbell can double that with a win.

Campbell has got some intel from fellow Canadians Jim Long, who made it to the second round in 2018, and the retired Bob Sinnaeve, who competed in 10 editions of the BDO World Championship.

And he will have the support of his wife, who made the trip to England. Their three kids, aged three, four and nine, will stay at home.

While he enjoys darts, he is realistic about it. Campbell's feet are planted firmly on the ground.

"To me it's pretty much always going to be a hobby," he said. "I can't just up and move over there to make it a career. So I never really thought about how good I was or anything like that. I just enjoy the game and play it."

He reckons that relaxed attitude will actually help him in London.

"I'm not sure if I'm more excited about going over to play or watching it in the crowds," he said.

Campbell says 90 per cent of darts is mental with the other 10 per cent mechanics, so staying focused in important.

"As soon as you start thinking of other things or one little thing irritates you, it's hard to let go."

Campbell is sponsored by L-Style Global, Smurf Darts and One80 Darts.

There are competitors from 28 countries from Australia to Wales. England and the Netherlands have the best representation with 37 and 11 competitors, respectively.

Campbell started playing darts at age 18, starting with a league run out of a friend's garage. He then started played at the local Legion.

"And it just went from there," he said.

Campbell has spent the last two years on the North American circuit.

This report by The Canadian Press was first published Dec. 12, 2019.