Flyers beat Canadiens 2-1 in Game 1, but Montreal shows it can hang with Philly

TORONTO — Claude Julien marvelled at the Philadelphia Flyers this week. The head coach of the Montreal Canadiens was impressed by their depth, team play and skill from top to bottom.
Aug 13, 2020 3:09 AM By: Canadian Press 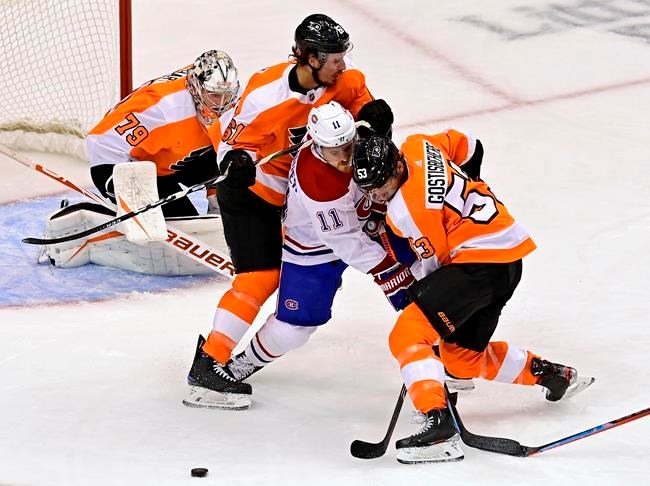 TORONTO — Claude Julien marvelled at the Philadelphia Flyers this week.

The head coach of the Montreal Canadiens was impressed by their depth, team play and skill from top to bottom.

Despite a disappointing result Wednesday, Julien has now seen first-hand that his roster can hang with the No. 1 seed in the Eastern Conference.

Carter Hart made 27 saves, Joel Farabee scored 16 seconds after Montreal tied the game, and the Flyers defeated the Canadiens 2-1 in the opener of their first-round playoff series.

After a sluggish first period — Montreal's first action since eliminating the heavily-favoured Pittsburgh Penguins in the qualifying round Friday — the Canadiens got their legs going in the second and went blow-for-blow with the Broadstreet Bullies.

"I thought we did well," Julien said. "The first period was a tough period for us. Whether it was because we hadn't played in the last four or five days or whether we're a little nervous and trying to feel our way through, but I thought from the second period on, we really started playing our game.

"We built some confidence in knowing that we can play with these guys."

Ivan Provorov had the other goal for the Flyers, who will look to take a 2-0 lead in the best-of-seven matchup Friday afternoon. Shea Weber replied for the Canadiens, while Carey Price stopped 29 shots in the loss.

Montreal, the final club in the NHL's 24-team restart, stunned the Penguins — who had the NHL's seventh-best record when the schedule was halted because of the COVID-19 pandemic five months ago — 3-1 in the best-of-five qualifying round to book a place in the usual 16-slot playoff bracket.

Philadelphia, meanwhile, sat fourth of four teams vying for the No. 1 seed in the East, but beat the Boston Bruins, Washington Capitals and Tampa Bay Lightning by a combined 11-3 scoreline in the round-robin tournament to grab the top spot.

Down 1-0 after that tentative first, the Canadiens showed some life and got even at 14:38 of the second when their power play, which came in a league-worst 0 for 12 in the post-season, finally connected. Hart stopped Weber's one-time blast, but the puck popped out of a crowd in front to the Montreal captain, who snapped home his third.

The teams were even for exactly 16 seconds, however, as Farabee picked up his own rebound deflection on what looked like a nothing play to double his total.

Montreal, which sat 18 points behind Philadelphia in the standings back in March, had some chances earlier in the period, with Arrturi Lehkonen coming close with the teams playing 4-on-4 before Flyers captain Claude Giroux hit the post. Lehkonen then fell down on a potential 2-on-0 as Montreal didn't even get a shot off.

That set the stage for an incredible sequence that could have ended in a Philadelphia goal — or serious injury — at the other end.

Scott Laughton, who has a team-leading five points, took a behind-the-back feed from Kevin Hayes with Price completely out of position. Canadiens rookie centre Nick Suzuki found himself in front the vacated net as Laughton wound up for a point-blank slapshot, but Montreal's netminder made a miraculous, desperation stick stop to save a goal, and potentially Suzuki from a trip to the dentist or doctor.

"Just kind of tucked my head," said the 21-year-old Suzuki. "Carey did an unbelievable job there saving that and saving my head."

Hart, who grew up idolizing Price, then made a good stop on Paul Byron on a 3-on-1 break before Weber and Farabee traded goals.

"I've got to know Carter and got to know how he sees the game and handles the situation," Vigneault said. "He's been through big games before and played well.

"He's just going out and doing what he's supposed to do, giving us a chance to win games."

Price stopped Hayes early in the third, and then held the fort on a 4-on-3 power play that saw Sean Couturier come close from the doorstep.

Philadelphia got another power play with under nine minutes to go, but the best chance came after the penalty expired when former Canadiens centre Nate Thompson — dealt at the trade deadline with Montreal having thrown in the towel on the season — somehow missed a tap-in from the lip of the crease.

The Canadiens had a couple opportunities with Price on the bench for an extra attacker, but Hart denied Phillip Danault in tight before Suzuki hit the crossbar with under 30 seconds to go.

"We generated a ton," Suzuki said. "We've shown that we can play against the top teams in the league, and this team is definitely one of them."

Flyers winger Jakub Voracek returned to the lineup after missing his team's final two round-robin games, and made an immediate impact on a Philadelphia power play that entered 0 for 11.

Provorov's one-timer from the point tipped off Byron's stick up high and snuck its way through Price with Voracek providing a screen at 8:54 of the first.

The Canadiens got a scare later in the period when Derek Grant bowled Price over after getting shoved by Xavier Ouellet off the rush. The Montreal goalie, whose leg folded awkwardly underneath him for a split second, faked like he was going to give Grant a blocker to the face in retaliation — perhaps channelling former Flyers goalie and noted pugilist Ron Hextall — but held back before a scrum ensued in the crease.

It was an early indication Montreal won't be going down without a fight.

"They're an extremely good team," Julien said of the Flyers. "I'd like to think that our team is a good enough team to play with these guys."

They certainly showed that in Game 1.

This report by The Canadian Press was first published Aug. 12, 2020.