EDMONTON — While the headlines have gone to quarterback Mike Reilly and the high-flying aerial pyrotechnics, the numbers suggest it's a crazed-dog defence that has the Edmonton Eskimos sitting pretty at 5-0.
Aug 1, 2017 5:03 PM By: Canadian Press 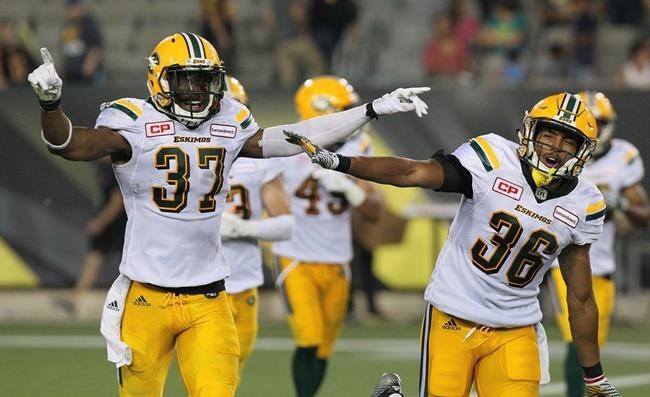 EDMONTON — While the headlines have gone to quarterback Mike Reilly and the high-flying aerial pyrotechnics, the numbers suggest it's a crazed-dog defence that has the Edmonton Eskimos sitting pretty at 5-0.

"Once you apply pressure to anything something's going to happen. Pressure bursts pipes. As long as we keep applying pressure the sack numbers will come and everything else will come with it," said defensive end Odell Willis said Tuesday after practice indoors beside Commonwealth Stadium.

The Eskimos occupy the apex of the CFL standings and will host the winless Hamilton Tiger-Cats Friday.

So far in 2017, Reilly and his offence have dominated the highlight reels with three fourth-quarter game-winning drives. Last week, in a 37-26 win over the B.C. Lions, three Eskimos receivers went over 100 yards, highlighted by Vidal Hazelton's 108-yard catch-and run TD.

The Green and Gold, in fact, won their first four games by a combined 12 points before eclipsing BC by 11.

It's been the defence — in particular the veteran line — that has kept the Eskimos close.

The pass defence is the bread and butter. They own a league-leading 87.6 opposition pass efficiency rating.

They're crazy for the quarterback. They've pressured the opposing passer eight times a game on average, best in the league. They have 12 sacks, tied for third.

Defensive tackle Almondo Sewell said the coaching staff set the bar high on the import ratio, and then drilled the fundamentals.

"They came to us this year and they're like 'Look,man we're going with an all-American front this year, you guys gotta get off the ball (quickly).'

Sewell said defensive line coach Casey "is always on us every single day. There's never a down moment … get off the ball get off the ball, you practice good, you play good."

"(Defensive co-ordinator Mike) Benevides really simplified it for us: we're going to live and die by our front four," he added.

"We do a good job of protecting the younger guys on the back end, because it almost seems like we lose a key guy every single game."

The defence, in fact the entire roster, has been hit with a slew of injuries, particularly in the linebacking corps and in the defensive backfield.

Middle linebacker and defensive leader J.C. Sherritt was lost for the season in game one with a ruptured Achilles tendon.

Linebackers Kenny Ladler and Korey Jones have been stepping up in his absence. Ladler has 30 defensive tackles, 7th in the CFL, along with two interceptions.

"The front four, they make our jobs easier," said Ladler.

"We just have to make sure we don't give up the big plays."