The three Dufour-Lapointe sisters who have been inseparable in freestyle skiing will be down to two. Maxime Dufour-Lapointe, the eldest at age 29, announced her retirement Wednesday after a decade on the Canadian women's moguls team.
Aug 8, 2018 5:28 PM By: Canadian Press 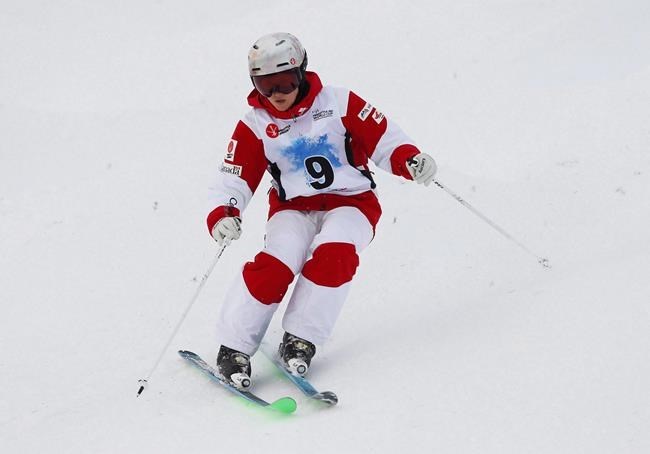 The three Dufour-Lapointe sisters who have been inseparable in freestyle skiing will be down to two.

Maxime Dufour-Lapointe, the eldest at age 29, announced her retirement Wednesday after a decade on the Canadian women's moguls team.

While she didn't reach the Olympic and world championship podiums as sisters Justine, 24, and Chloe, 26, have done, Maxime was a consistent top-10 finisher and won four World Cup medals during her career.

The Montreal siblings consider each other integral to their individual successes.

"I know for a fact that my moguls career wouldn't be the same without my sisters and I think they feel the same way," Maxime told The Canadian Press.

"I'm not sure I would have lasted for so long because my sisters pushed me outside of my comfort zone every day."

Justine and Chloe won gold and silver respectively while Maxime placed 12th at the 2014 Olympic Games.

They became just the third trio of sisters to compete in the same individual event at a Winter Games, according to the Canadian Olympic Committee.

"I think it wouldn't be the same experience if didn't have my sisters behind me and with me during the Olympic Games," Justine told The Canadian Press last year.

"Just going to the Olympic Games is a really difficult and intense thing to do. Because I was going through this really intense moment of my life, I had my two sisters with me . . . I felt so good. I knew I was going to be OK."

She was among the first women to execute a full-twisting backflip in competition.

Moguls is an individual sport, but the Dufour-Lapointes considered themselves a team.

Branding themselves "3SDL", the siblings made freestyle skiing history by sweeping the moguls podium at a World Cup in Val Saint-Come, Que., in 2016.

When the trio travelled to international competitions, if one had a physiotherapy treatment, another bought groceries and the other cooked dinner.

Maxime's retirement will be an adjustment for all three of them.

"Maxime has been my inspiration," Chloe said. "She started in freestyle, I watched her doing it and wanted to be like her. Now it's like there's a piece missing in the equation.

"Of the three of us, she was always the most level-headed, so we're going to miss that at World Cup events."

Maxime was the first sister to ski moguls at age 11 and thus paved the way for her sisters to follow. She is now the one to show them how to transition into a post-competitive career.

Maxime has been accepted into the University of Montreal's medical school.

"Change is a part of life and it's going to happen soon or later," Maxime said. "We had a blast being together. We're still sisters.

"Our support system goes above and beyond sports. It's how we do things. It's not because one of us stops skiing, this falls apart. We would have always been close and are still really close."