CALGARY — DaVaris Daniels was relieved to pad his fantasy stats against the Toronto Argonauts on Saturday. Daniels caught a pair of touchdown passes from quarterback Bo Levi Mitchell to lead the Calgary Stampeders to a 23-7 win over the Argonauts.
Aug 27, 2017 1:23 AM By: Canadian Press 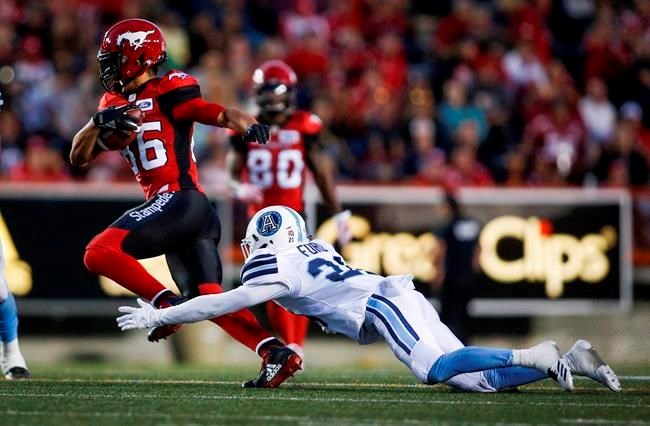 CALGARY — DaVaris Daniels was relieved to pad his fantasy stats against the Toronto Argonauts on Saturday.

Daniels caught a pair of touchdown passes from quarterback Bo Levi Mitchell to lead the Calgary Stampeders to a 23-7 win over the Argonauts.

"I'm happy," said Daniels, who added that he was taking a bit of heat from people who had him on their fantasy football teams. "I think it's about time. I hope they're happy with me after today."

Daniels also caught a touchdown pass from Mitchell in Toronto on Aug. 3 when the Stamps beat the Argos 41-24. Three of his four touchdown catches this season have come against the Argos.

"He's a guy that'll go up and make plays and I've got to trust him and let him go do that," said Mitchell. "He saved me on that second one. My arm didn't give me what I wanted on that one and he went up and made a hell of a play."

Rene Paredes kicked three field goals and a single for the Stampeders (7-1-1), who leapfrogged over both the Winnipeg Blue Bombers (7-2) and Edmonton Eskimos (7-2) into top spot in the CFL's West Division.

The Stamps extended their winning streak to five straight games and have now won 14 games in a row at McMahon Stadium dating back to 2015.

"Nothing seemed easy," said Calgary coach Dave Dickenson. "It was tough. They came at us. I thought we were a little choppy up front. I thought DaVaris had a good game and Bo was slinging it, but he was getting some pressure in there and our run game wasn't up to par, so we'll have to be better in those stages."

The Argonauts (4-6) struggled on offence all game — quarterback Ricky Ray was 22 of 34 for 257 yards — and could only muster one touchdown in the second quarter when Cassius Vaughn picked off an errant pass by Mitchell in the end zone and ran it back the other way across the goal-line.

Despite the loss, the Argos still sit atop the East Division standings ahead of the Ottawa Redblacks (3-6-1) and Montreal Alouettes (3-6).

"We've got to go back and we've got work to do," said Toronto coach Marc Trestman. "I thought defensively they had a great plan and we didn't execute ours to the way we needed to do and at times when we were moving the ball we stopped ourselves."

Calgary drove the ball down to the Toronto 12-yard line in the second quarter before Vaughn picked off a pass intended for Marquay McDaniel in the end zone and ran it back 115 yards the other way for the first touchdown of his career.

Vaughn was initially given a penalty for defensive pass interference, but after Trestman threw his challenge flag, the play was reviewed and the call was reversed.

The Stamps answered right back as Mitchell engineered a seven-play, 72-yard drive that he capped off by throwing a 21-yard touchdown pass to Daniels at 7:28.

"As an offence and as a team, we needed it," Daniels said. "I was just happy to be the one to make that play."

Although Paredes missed the convert, he kicked a 40-yard field goal as time expired in the first half to give the Stamps a 9-7 lead.

Daniels caught a 38-yard TD pass from Mitchell at 4:54 of the third quarter to cap off a four-play, 71-yard drive. Parades then added a 68-yard single on the ensuing kickoff to put Calgary up 17-7.

Parades accounted for all the scoring in the second half when he booted a 24-yard field goal at 14:44 of the third quarter and added another from 32 yards out at 13:50 of the fourth.