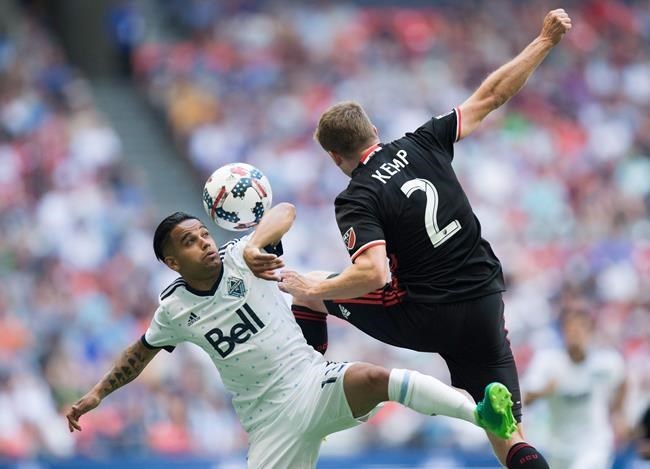 The Vancouver Whitecaps had thoroughly dominated D.C. United the previous afternoon in almost every facet, but were stunned to walk away empty handed after a failure to capitalize on their boatload of opportunities and a dubious penalty decision ended in a 1-0 home defeat.

"Going into those last few minutes I thought we'd at least drag a point out of it," Harvey said in advance of Vancouver's game against expansion Atlanta United at B.C. Place Stadium on Saturday afternoon. "It's frustrating, but at the same time you look at these games we've been playing and we're producing a lot of chances."

The veteran defender is right about that.

The Whitecaps held a 22-7 edge in shot attempts, had 34 crosses to D.C.'s six and became the first team in Major League Soccer since 2010 to hit the woodwork four times in the same match — the last on Cristian Techera's stoppage-time penalty that struck the post and skimmed harmlessly across the face off goal.

"We're playing very well," Harvey added after a practice session this week on the club's pristine new training pitch. "It just isn't going our way right now, and sometimes that's what soccer does to you. Hopefully we can turn that around."

Vancouver (5-6-1) and Atlanta (5-4-3) are meeting for the first time. The two are close in the standings with each sitting seventh in their respective conference, however that's where most of the similarities end.

The Whitecaps are 3-2-0 over their last five, but as in years past have struggled to finish their chances with just 15 goals through 12 MLS games. On the other side, Atlanta has filled the net through its first dozen matches, scoring 27 times to sit tied for the league lead, including seven combined goals in consecutive victories.

United midfielder Miguel Almiron leads the attack with seven goals, while strikers Josef Martinez and Hector Villalba have five each — a total that puts the trio ahead of Vancouver's entire roster 17-15.

"Dangerous squad from all angles," said Harvey. "Their attacking (front) four is playing very well right now. I've been watching them from a distance, just interested in their signings and how they've built their team.

"It's an attacking brand."

Almiron, a Paraguayan international, has five goals over the last two games for Atlanta, which is led by former Argentina and Barcelona manager Gerardo (Tata) Martino.

"He's done fantastically," Vancouver goalkeeper David Ousted said of the 23-year-old Almiron. "He's a guy we need to get close to. A key to locking Atlanta down is locking him down."

Saturday's visitors are appealing to the eye with a free-flowing style, but the Whitecaps believe that also leaves them vulnerable at the other end.

"They're an attacking team, for sure," said Vancouver striker Fredy Montero. "Hopefully they're going to do the same thing here because we know when teams are attacking us on our field, that's going to give us more space to penetrate their defence."

The Whitecaps, who were eliminated from the Canadian Championship semifinals by the Montreal Impact on Tuesday with a young lineup, were kicking themselves after the loss to D.C.

Montero — a high-priced designated player brought in on loan for 2017 — hasn't scored in five MLS games, but still leads Vancouver with four goals. He saw his penalty saved in the Whitecaps' victory over Sporting Kansas City on May 20 and had six shots against D.C., including two on target.

Despite the ball not bouncing his way at the moment, the Colombian insists he isn't getting frustrated.

"It's different than not having the opportunity to score," said Montero. "It's going to come, it's going to get in the next game. The most important thing is the result for the team."

Notes: Vancouver won the first leg of the Canadian Championship semifinal 2-1 at home against the Impact last week, but lost the return leg 4-2 in Montreal for a 5-4 aggregate defeat. ... Whitecaps midfielder Matias Laba is available against Atlanta after serving a one-match suspension. ... After five games in 15 days, Vancouver doesn't play again until June 17.