TORONTO — Being the CFL rushing leader will earn Jerome Messam a physical homecoming. The six-foot-three, 255-pound Toronto native leads the Calgary Stampeders into BMO Field on Thursday night against the Argonauts.
Aug 2, 2017 3:46 PM By: Canadian Press 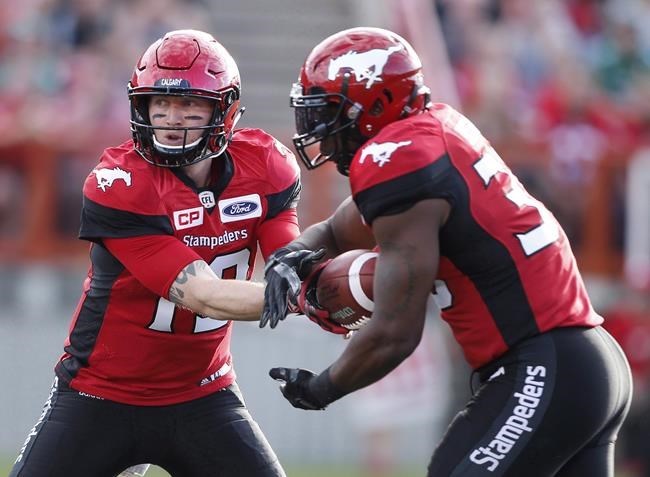 TORONTO — Being the CFL rushing leader will earn Jerome Messam a physical homecoming.

The six-foot-three, 255-pound Toronto native leads the Calgary Stampeders into BMO Field on Thursday night against the Argonauts. Messam comes in having rushed for 414 yards (4.76-yard average) and five TDs this season, scoring three of those touchdowns in last week's lopsided 60-1 home win over the Hamilton Tiger-Cats.

"He's going to tell you the same thing, he's going to run it hard and run it again. We have to be assignment sound but even more so, physical. That's why I said 'hit him' six times in a row."

But Woods admits the Argos face a stiff challenge making that a reality.

"I was Messam's teammate (2013 in Montreal). He's a great player and I'm excited for the challenge. I think our whole defence is."

Both teams are playing on a short week. Toronto is suiting up for the third time in 11 nights while Calgary squared off against Hamilton on Saturday night.

"I was hoping to get four in over 11 days but three will have to do," Woods said, tongue firmly in cheek. "It's part of the league, everyone faces this type of challenge where you have quick turnarounds.

"I think Calgary is on a short week also so it's not an excuse but it's a reality."

Toronto (3-3) tops the East Division. Quarterback Ricky Ray leads the CFL in passing (2,282 yards), having thrown for over 300 yards in each of the last six games, a career best.

"This is a team that has all three phases working well," said Toronto head coach Marc Trestman. "The coaching staff has been together for the most part and the systems of football are all in place.

"We're excited about playing them. They're a championship-calibre team and it's an opportunity to find out more about ourselves."

"It starts with their run game," he said. "Messam is a strong runner.

"They don't run complicated plays, they pull the ball and throw the ball off the run, their run-action is outstanding. They're very very efficient and have a very good understanding of their structures in all three phases."

Argos defensive lineman Shawn Lemon has fond memories of his time in Calgary. He spent the 2013-14 seasons with the Stampeders, winning a Grey Cup in 2014.

"I had good years in Calgary, they were nothing but great to me when I was there," Lemon said. It's just another game and another chance for us to get a win.

""They're a very productive team, they find a way to make plays and win. But for us, it's as simple as executing the gameplan. I trust what the coaches have gameplanned for us so just come out and play fast and physical.

"That's enough to beat any team in this league."