VANCOUVER — A Vancouver Whitecaps striker has been fined and an Impact midfielder suspended following a testy battle that ended in a 4-2 win for Montreal on Sunday.
Sep 16, 2020 6:48 PM By: Canadian Press 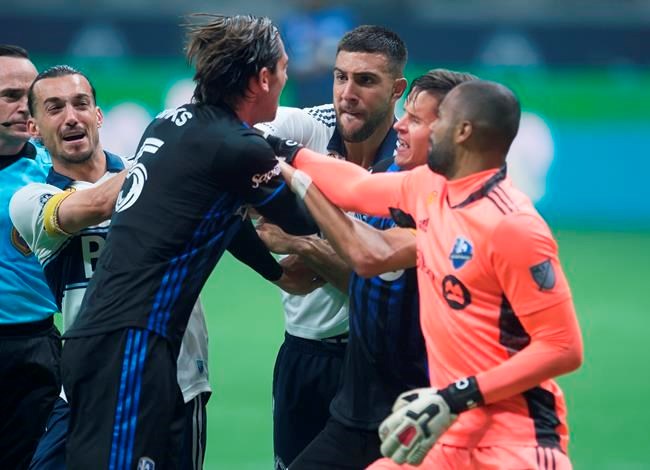 VANCOUVER — A Vancouver Whitecaps striker has been fined and an Impact midfielder suspended following a testy battle that ended in a 4-2 win for Montreal on Sunday.

Vancouver's Lucas Cavallini was ejected in the 57th minute after clipping Montreal 'keeper Clement Diop on the head on a shot. It was the Canadian forward's second yellow-card offence of the game.

The play resulted in players from both teams engaging in pushing and shoving by the Montreal net, and Cavallini put his hands around another player's neck during the skirmish.

Major League Soccer's Disciplinary Committee ruled Wednesday that his actions violated the league's rules and handed the 27-year-old Cavallini an undisclosed fine. He was also fined for failing to leave the field "in a timely and orderly manner."

The committee also ruled that Montreal's Emmanuel Maciel will be suspended for two games and handed an undisclosed fine after he took out Vancouver's Cristian Dajome with a hard, studs-up tackle in the 70th minute.

Neither Maciel nor Cavallini were eligible to play when the Whitecaps and Impact squared off again in Vancouver on Wednesday.

Cavallini issued an apology for his actions on Twitter on Tuesday, saying he let his emotions get the best of him.

"I have high expectations of myself, I am a passionate player and I recognize I need to stay on the pitch to best help my teammates," the post said.

"There is still a lot of football to be played and we are working hard to build something special here in Vancouver. You can be sure I will use this as a chance to grow and give everything I have for this club and this city."

This report by The Canadian Press was first published Sept. 16, 2020.