Two Canadians will be front and centre Thursday in European women's showcase soccer match.
May 31, 2017 11:03 AM By: Canadian Press 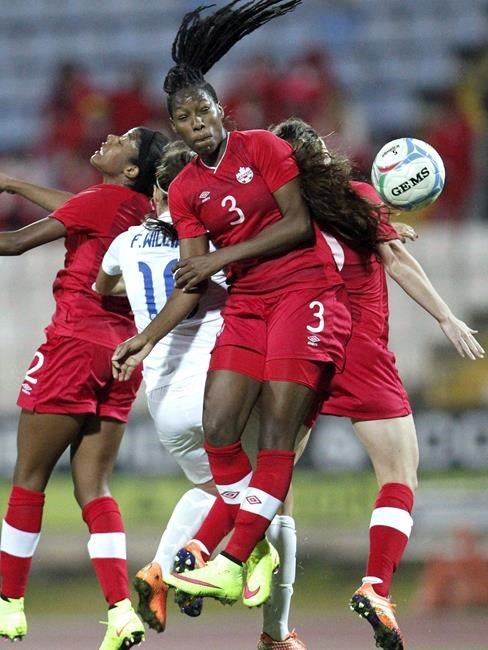 For Herdman, the showdown is further proof of the rise of Canadian women's soccer.

"In 2011, the women's program I think had hit its lowest point when it finished last place in the World Cup," he said. "If somebody said to you '(In) five years time, there's going to be two Olympic medals in the team's pocket, you're going to have two players under the age of 23 competing together, against each other, in a Champions League final and a guaranteed Champions League medal in one of their pockets and you're in the top five rankings in the world,' I don't think anyone would have believed you.

"I'm sure someone would have said 'Is it (Christine) Sinclair that's won the medal?' No one would believe it wouldn't be Sinclair. It's crazy to think how far the program's come. ... It's a real testament to the work of Canada Soccer but also to those young players that have embraced every opportunity they've been given."

While the 33-year-old Sinclair remains the gold standard of Canadian women's soccer for the breadth and quality of her career, Lawrence and Buchanan are blazing their own trails.

Best friends who grew up playing together in Brampton, Ont., and excelled at West Virginia University, they have 121 caps for Canada between them.

Herdman says the two Canadians are playing at the highest level of women's club soccer.

"These teams are littered with the best players in the world. Just to make the starting lineup week in week out is a huge achievement for two players so young."

Herdman first saw the two players at an under-17 camp in Orlando soon after being appointed Canada coach in September 2011.

"I was really impressed with just the athletic quality — and the football IQ of both Kadeisha and Ashley," he recalled. "They just seem to have a really good feel for the game."

Herdman knew Buchanan would soon be headed abroad after she won the Hyundai Young Player Award at the 2015 Women’s World Cup.

"Credit to Lawrence. She's really pushed at her game at every opportunity and risen to a new level."

Both players say the high technical level of play in Europe has upped their game.

"I'm loving it," said Lawrence, who plays wingback in PSG's 3-5-2 formation. "It's challenging every day but I've noticed a lot of growth in my game."

"You definitely get better every day," added Buchanan.

While competition in the French league can vary, the Champions League is a step-up in class, says Lawrence.

"To have the opportunity to play in Champions League is every footballer's dream," she said. "I'm just so grateful to be able to play against the likes of Bayern Munich, Barcelona. They're quality opponents and they're the best in their league."

At centre back, Buchanan is a physical force with the athleticism to cover a lot of ground. Lawrence is an elegant runner with silky skills and a great engine.

The two met at the Brams United Girls Soccer Club in Brampton at the under-nine level. And while they grew up playing together, they were on different club teams during their under-14 and -15 seasons.

"It kind of brings back childhood memories," Buchanan said of facing her friend.

The two have also had some hotly contested drills in training.

"It's always a battle and a fight," said Lawrence. "Because we just bring 100 per cent. That's been the beauty of our relationship — we've pushed each other on the field and we don't back down. And I think that's great because it forces me to be a better player and to get me out of my comfort zone."

Anthony Lawrence, Ashley's older brother, has been watching the two since they were five years old. He and their mother will be at Thursday's game at Cardiff City Stadium.

He says the two players were always at the top of their soccer class, which helped build the bond between them. The two families remain close.

"We're just all really proud of them and happy that they've made it to where they are today," he said. "Both families are probably excited, a little nervous, but I think we're very happy and supportive for both players."

Lyon is bidding for a treble, having already win the French league and Cup. The defending European champion, it beat VfL Wolfsburg on penalties last year.

The stakes are also high for PSG, which finished third in the league and needs to win in Cardiff to qualify for Europe next season.

It marks the first time that two teams from the same country have contested the European club championship.

Lyon has a remarkable pedigree that includes 11 straight French titles.

Thursday marks the fourth meeting between the French rivals this season.