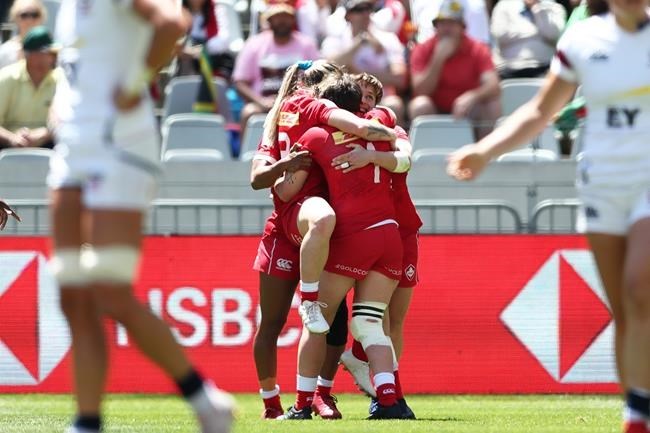 The Canadian women opened the season with a disappointing sixth in Glendale, Colo., before finishing runner-up to New Zealand last weekend in Dubai.

New Zealand downed Australia 17-7 in the women's championship game for its second Cup win in as many weeks. The victory left the Black Ferns with 50 points, six ahead of Australia in the World Series standings with the U.S. third at 48 and Canada fourth at 44.

Points are important given the final standings will affect seeding at the Tokyo Olympics.

New Zealand edged host South Africa 7-5 in a tight men's final that was tied 0-0 at the half.

Justin Geduld broke the deadlock with a ninth-minute try for South Africa. But New Zealand finally broke through the South African defence with three minutes remaining thanks to a converted try by Ngarohi McGarvey-Black that gave the All Blacks the 7-5 lead.

The two had met in the Dubai final with the Blitzboks blanking the All Blacks 15-0.

New Zealand and South Africa both have 41 points in the men's overall standings after two events. France was third with 29 points with Argentina and England both on 24. Canada dropped two spots to 12th with 13 points.

With France leading 17-12, Joanna Grisez was sent to the sin bin with 32 seconds left for grabbing Canadian speedster Charity Williams by the hair as Canada pressed for the trying score in the third-place game. Bianca Farella scored in the corner from the penalty to tie the game at 17-17 and the game went to extra time after captain Ghislaine Landry missed the long conversion attempt.

The Canadians then penned the French in their own end before Britt Benn ripped the ball free and passed to Julia Greenshields who dove over for the winning try.

Benn and Landry were both named to the women's tournament all-star team.

The French had beaten the Canadians 14-12 in pool play Saturday, just the third win for France in 26 career meetings.

Farella opened the scoring early for Canada against France, taking advantage of a French handling error to boot the ball over the goal-line before touching it down in the first minute.

Yolaine Yengo capped off an eight-pass French attack, touching down in the corner to cut the Canadian lead to 7-5. Yego then found captain Fanny Horta unmarked on the flank for another try and a 10-7 lead.

Coralie Bertrand increased the lead to 17-7 with a try after Canada fumbled the ball away. But Canada answered quickly with a series of offloads eventually finding Greenshields alone for a try down the wing, cutting the margin to 17-12.

Earlier Sunday, Canada edged the U.S. 15-14 in the women's Cup quarterfinal before losing 15-5 to New Zealand in the semifinal. France blanked Russia 31-0 but was beaten 24-19 by Australia in its semifinal.

Greenshields' 11th-minute try proved to be the difference in the win over the Americans, who had beaten Canada twice earlier this season. Benn and Landry also scored for Canada, which led 19-7 at the half.

New Zealand relied on tenacious defence and opportunistic attack in beating Canada in a semifinal that saw the Canadians dominate possession early but unable to take advantage.

Alena Saili, Kelly Brazier and Niall Williams, whose older brother Sonny Bill Williams is a member of the Toronto Wolfpack, scored tries as New Zealand led 15-0. Farella scored a late consolation try for Canada, which lost 17-14 to New Zealand in the Dubai final.

The Canadians almost escaped meeting New Zealand in the semifinal. The Black Ferns needed a late try by Ruby Tui to force extra time in their quarterfinal against England at 21-21. Teenager Mahina Paul then crossed the line for the golden-point victory to keep New Zealand in the Cup hunt.

Pat Kay and Phil Berna scored first half-tries against Australia for Canada, which was helped by a yellow card to Josh Turner late in the half for an infraction at the breakdown. David Richard and Josiah Morra added tries in the second half.

The Canadian men lost 33-21 to Argentina and 33-5 to New Zealand earlier in the tournament before rallying to beat Wales 17-14 in their final pool match Saturday.

Australia, fifth in Dubai, had a poor showing in South Africa losing to Ireland and Kenya before beating Samoa in its final pool game. The Aussies dropped to eighth overall.

It marked the first time the women have taken part in the Cape Town Sevens, one of six combined men's and women's events this year.

The men and women next play in Hamilton, New Zealand, in late January and then Sydney, Australia, in early February.

This report by The Canadian Press was first published Dec. 15, 2019.

Kobe helicopter tried to climb to avoid clouds before crash
Jan 27, 2020 11:51 PM
Comments
We welcome your feedback and encourage you to share your thoughts on this story. We ask that you be respectful of others and their points of view, refrain from personal attacks and stay on topic. To learn about our commenting policies and how we moderate, please read our Community Guidelines.