SAN DIEGO — A rough day at the U.S. Open for Mackenzie Hughes saw the Canadian golfer lose his lead early and fall out of contention at Torrey Pines Sunday. Hughes of Dundas, Ont.
Jun 20, 2021 10:29 PM By: Canadian Press 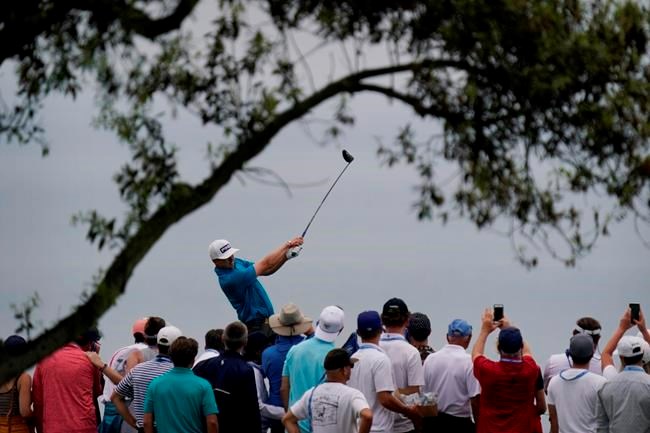 SAN DIEGO — A rough day at the U.S. Open for Mackenzie Hughes saw the Canadian golfer lose his lead early and fall out of contention at Torrey Pines Sunday.

Hughes of Dundas, Ont., made three bogeys and a double bogey — a tee shot that ended up stuck in a tree — on the back nine to finish in a four-way tie for 15th.

Entering the fourth round tied for the lead and in the final group, Hughes shot a 6-over 77 for his worst showing at the 72-hole event. He finished 1-over 285 overall, seven strokes behind winner Jon Rahm (67) of Spain.

South Africa’s Louis Oosthuizen (71) was second ahead of American Harris English (68) in third.

“I think a lot of things have to go your way on a Sunday of a major in order to win, and I wasn't making the putts when I need to,” Hughes said.

“Overall I'll know what I felt like in this final group today and be able to apply that next time I'm there, hopefully soon.”

Adam Hadwin of Abbotsford, B.C., the only other Canadian to make the weekend cut, tied for 40th at 6 over.

Hughes was in a great position at the end of the third round, shooting a 3-under 68 buoyed by a 63-foot eagle putt on the par-5 13th. The Canadian ended the day tied for first with Oosthuizen and Russell Henley at 5 under.

But things began to unravel for Hughes on the back nine Sunday.

Trailing leader Oosthuizen by two shots, Hughes pulled his tee shot left on the par-3 11th hole. It bounced off a cart path into a tree.

The ball got jammed between branches and never came down.

Hughes dropped his club and kicked it in frustration.

After consulting with a rules official, the Canadian took a drop and hit the ball onto the green. He two putted for double bogey, dropping him to 4 under.

“It's like one-in-a-million break,” Hughes said. “I've played golf my entire life, I've never had a ball stuck in a tree. For it to happen on the back nine of a U.S. Open felt unfortunate because if that ball is over there in the grass, I've got a chance to get up-and-down for par, and that's a different outlook than trying to get up-and-down for bogey, and I ultimately made a double there.

“Just a really bad break, and an unfortunate time to have it happen.”

That shot put a serious dent in his U.S. Open chances and he never recovered.

Hughes followed that tree shot with bogeys on the 12th, 14th and 15th holes.

“The last five holes I thought I may need to do something, and trying extra hard doesn't really end up going the right way a lot of times,” Hughes said. “You have to let golf come to you, and I was trying to do a little more than was probably needed to do.”

The last Canadian to win a men's golf major was Mike Weir, who claimed the Masters in 2003.

With files from The Associated Press.