Canada's Olympic team doctor is confident that with the pace of the country's vaccine rollout, every Canadian athlete will be vaccinated before this summer's Tokyo Olympics. Athletes aren't required to be vaccinated to participate in the Games.
Apr 30, 2021 11:26 AM By: Canadian Press 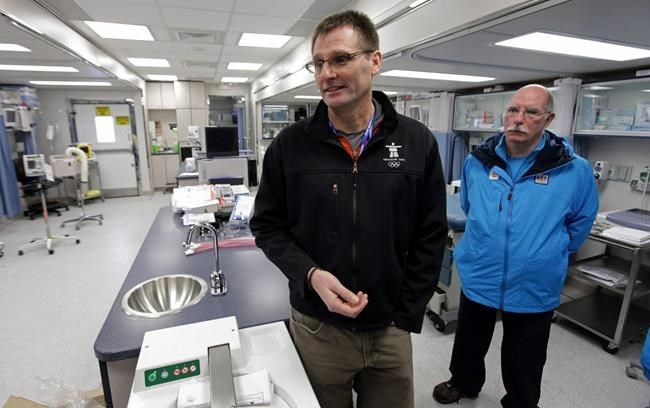 Canada's Olympic team doctor is confident that with the pace of the country's vaccine rollout, every Canadian athlete will be vaccinated before this summer's Tokyo Olympics.

Athletes aren't required to be vaccinated to participate in the Games.

And so, with less than three months before they open on July 23, and with Japan in a state of emergency amid another wave of COVID-19, concern is mounting about how Olympic and Paralympic organizers can ensure the safety of 11,000 athletes from some 200 countries.

Canada's stance is its athletes won't jump the vaccine queue.

It likely wouldn't come to that anyways, according to Dr. Mike Wilkinson, the Canadian Olympic Committee's chief medical officer.

"Canada has vaccinated approximately just over 30 per cent of our population, and so we're doing pretty well," Wilkinson told The Canadian Press.

"It's moving very quickly, I am confident that the athletes will get vaccinated, as well as the rest of the team (coaches, etc.), before they leave for Tokyo."

He noted recent announcements in Ontario and Quebec that anyone aged 18 and over is expected to have access to vaccines by the end of May.

The arrival of the single-dose Johnson & Johnson vaccine this week is also good timing, Wilkinson said, and even a single dose of multi-dose vaccines provides excellent coverage and prevention of serious disease.

"We need to understand that vaccines are preventing serious illness and serious disease. It's not 100 per cent eliminating chances you're actually getting the virus, but it's significant protection.

"But that doesn't mean you can throw all the other prevention measures out, and so that's why we've emphasized the whole time that we're in control of how we can minimize exposure, which is essentially through the masks, social distancing, the hygiene, the hand washing, the sanitation, et cetera."

Japan organizers released their latest edition of the "Playbook" this week, outlining safety measures and restrictions at the Games, including daily COVID-19 testing for athletes.

Athletes will stay within a "bubble," moving only between the athletes village, competition venues and training sites.

Wilkinson said daily testing was good news, and will go a long way in decreasing the chance of asymptomatic carriers causing transmission.

The Canadian team, he said, plans to implement its own protocols for an additional level of safety. Wilkinson said the team is looking at technology to monitor air quality and is partnering with sanitation companies for cleaning and sterilizing of Canada's area of the athletes village, which includes Canada's accommodations and its own fitness and medical centres.

Canada will have testing capability for not only COVID-19 but other respiratory and gastrointestinal pathogens. Any athlete or other member of the Canadian team who tests positive for COVID-19 will be treated by Japanese public health authorities.

With athletes living and eating in close quarters at the village — think of a giant cruise ship — there are concerns about viruses ahead of any Olympics.

The 2018 Pyeongchang Olympics saw an outbreak of the highly contagious norovirus. Canadian tennis player Milos Raonic withdrew from the 2016 Rio Olympics due to concerns over the Zika virus. And the 2010 Vancouver Olympics were held amid an outbreak of the H1N1 virus.

The dining hall is a cause for concern, but Wilkinson said organizers have nearly doubled its size, plus reduced capacity to ensure safe distancing. They're encouraging "grab-and-go" meals, and have added outdoor dining space.

Will these safety measures be enough to prevent the Games from becoming a super-spreader event?

"I have to ask the questions. And I think they're fair questions," Wickenheiser told CBC Sports."(At the beginning of) the pandemic I said there's no way the Olympics can go ahead because history told us there was no way they could. And now I'm saying I don't know, I wonder if they can again."

Many countries, including Canada, are being ravaged by yet another wave and new variants of the pandemic.

Canada has seen first-hand how a COVID-19 outbreak can bring an athlete or team to its knees. The Vancouver Canucks had to pause activity for 11 days after 22 players and four members of the coaching staff tested positive. Two members of the Germany team tested positive at the women's world curling championships this week in Calgary.

And Olympic bobsled champion Alex Kopacz, who was hospitalized with COVID-19, described in heartbreaking detail how he drew up a will, said goodbyes to his family and friends, and contemplated his death during his darkest days.

Canada's Olympic swimming trials in Toronto were just postponed for a second time, pushed back to mid-June due to the current lockdown and case numbers in Ontario. Swimming Canada said they still may be moved from Toronto.

"FIBA has developed a strong COVID-19 Protocol in conjunction with the WHO and the NBA, and we are working on its implementation in Canada with the local organizing committee and all concerned authorities," a spokesperson told The Canadian Press. "FIBA is confident that the tournament will take place in Victoria."

In Japan, meanwhile, polls have consistently shown that the majority of Japanese residents — as many as 80 per cent — think the Olympics shouldn't be held. Less than two per cent of the Japanese population has been vaccinated.

This week, Australia and South Korea joined the list of countries saying they planned to prioritize Olympic athletes in their vaccine roll-outs.

Canada's message to athletes, Wilkinson said, is not to fret about vaccine dates.

"Obviously, for athletes not knowing (when and if they'll be vaccinated) does create significant mental stress and anxiety," he said.

The medical team's approach to any Games is hope for the best and prepare for the worst, and certainly Tokyo presents challenges unlike any other Olympics in history.

"We always prepare for worst-case scenarios and you truly hope they won't happen, but at least you've done all the mitigation factors," Wilkinson said.

"We've been advising the athletes and teams that we don't want to be wasting energy and mental stress on worrying about what other people are doing. We can only control what we do. And what we need to do is minimize our risk.

"It would be great if everybody that went to the Olympics was vaccinated. The reality, given that we've got over 200 countries represented coming, is that not everybody is likely to be vaccinated. But even with that, we can minimize infection."

Wilkinson has been to eight Olympic or Pan American Games as a team physician or CMO, most recently as the team's CMO at the 2018 Olympics and 2019 Pan Am Games.