As the designated team leader of the Israel Start-Up Nation entry at the Tour de France, Canadian Michael Woods doesn't plan to waste any time making his mark.
Jun 24, 2021 5:41 PM By: Canadian Press 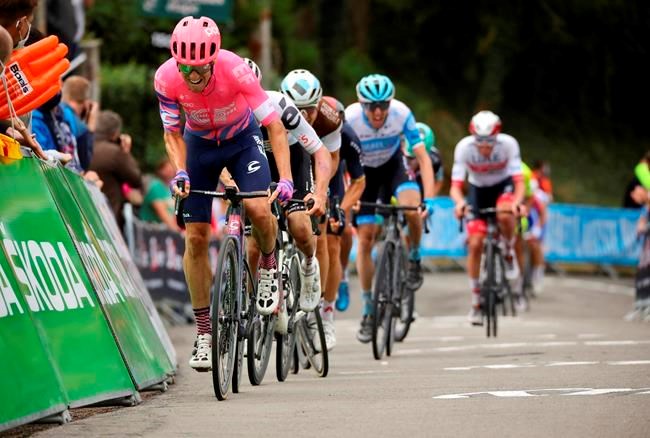 As the designated team leader of the Israel Start-Up Nation entry at the Tour de France, Canadian Michael Woods doesn't plan to waste any time making his mark.

His first goal is to win stages, followed by looking to finish high in the general classification. And the 34-year-old from Ottawa believes he can make a move early.

"It's a pretty classic Tour de France. A big emphasis on time-trialing, which is my Achilles heel. But otherwise it's a challenging course that does suit me quite well in other aspects."

Woods, an elite climber with a great gas tank, is healthy going into the race and has been in a rich vein of form.

He finished fifth in the recent Tour de Suisse, taking king of the mountain honours along the way. He was also fifth overall at the Tour de Romandie and placed fourth and fifth at Fleche Wallonne and Liege-Bastogne-Liege, respectively.

"It's been a real nice season so far," he said. "And I think a lot of that has to do just with the great team I have and the teammates that I have and the staff behind me. Yeah, it's been a nice run so far. I'm really looking forward to this next month because this is the big goal for me this season — and really from a career perspective — this Tour de France plus the Olympics."

Woods will leave right after the Tour for Japan, where he will ride in the Olympic road race along with Canadian veteran Hugo Houle, who is part of Astana-Premier Tech's team at the Tour.

Israel Start-Up Nation is co-owned by Canadian-Israeli entrepreneur Sylvan Adams, who is looking forward to his team's second participation in the storied race.

"The entire world is tuned into the Tour de France," Adams said. "And for us it's a symbol of great achievement that we've made it … We're very happy to be here. And this year we hope to make some noise."

Canadian Steve Bauer won a stage of the Tour in 1988.

"If I could get a stage win, if I could do well at this race, then it's just going to inspire more Canadians to get on bikes, which really is what motivates me most in cycling," said Woods.

The initial plan was for Woods to support Chris Froome, a four-time winner of the Tour de France. But the British star is still working his way back to top form after a horrific 2019 crash that saw him literally hit a wall at high speed at the Criterium du Dauphine.

"Originally my big goal was to use the Tour as preparation for the Olympics. But you don't get many opportunities in your life where you get to lead a WorldTour team at the Tour de France," said Woods. "So I realized that I had to seize that opportunity and make the best of it."

Woods says he understands who he is as a rider and what his limits are.

"I think that's going to go a long way in this Grand Tour," he said. "Every race you do, you just gain experience. And now that I'm at a place where I have all this experience, I have reference points now. And I'm really excited to use them and then lean on the wealth of experience my teammates have."

That includes Froome who returns to the Tour for the first time since his career-threatening crash. The 36-year-old's trophy case includes seven Grand Tour victories and 14 Grand Tour stage wins.

"He's a true gentleman, a great guy," said Woods. "I've raced with him twice now and in both instances he's been a really good resource. I mean he's the greatest Grand Tour rider of his generation. He sees races differently. Because of that it's been enlightening working with him — and inspiring. I'm excited to have him on board for the Tour."

Woods and Froome will also be supported by Montreal's Guillaume Boivin, who makes his Tour de France debut.

"Guillaume was one of our very first recruits … we go way back," said Adams. "I think it's great we're a home for Canadian cycling."

The Olympic road race is set for July 24, less than a week after the end of the Tour. But Woods says that is a plus.

"I'm always at my best the week after a Grand Tour," he said. "I find just the way I am as a rider, I get better over the course of a Grand Tour.

"In my previous team — EF (Pro Cycling) — they used to call me Mr. Fourth Week. If the race went for another week I'd just be even better. I need this race in order to be at my best at the Olympics."

His only concern is the time difference, with just six days to adjust to the seven-hour difference. But he competed in the Japan Cup two years ago on a shorter turnaround and placed second.

"The six days is tight but I have the first flight out of Paris after Stage 21 (the Tour finale) and I'll going to be jumping on that plane and going straight to Tokyo if all goes well."

He says the Grand Tour also helps him take the edge off. "You just get into race mode."

Woods, who makes his home in Andorra these days, will be on the move again as soon as the Olympic road race is done. His wife is due to give birth.

"She's due Aug. 15 but if our other pregnancies are any indicator, they've come early. So I could be missing the birth. I'm going to have to hustle to get back."

Houle, a 30-year-old from Sainte-Perpetue, Que., has said his goal is to win a Tour stage in honour of his younger brother Pierrik, who died in December 2012 when he was hit by a car while jogging. He was 19.

A former elite middle-distance runner, Woods came to cycling late after a series of foot injuries ended his running career in 2011.

Woods, who won stages at the Vuelta in 2018 and 2020 as well as bronze in the road race at the 2018 UCI World Championships, was likely set to miss the Games had they been held as scheduled in 2020 after breaking his femur in March, crashing out of Paris-Nice.

This report by The Canadian Press was first published June 24, 2021