TORONTO — Brittany Crew is at home in the shot put circle, where she crouches with a steel ball buried in the crook of her neck before exploding in a spinning blur that's as much ballet as brute strength. It's where Crew overcame bullying in school.
Jul 4, 2017 1:44 PM By: Canadian Press 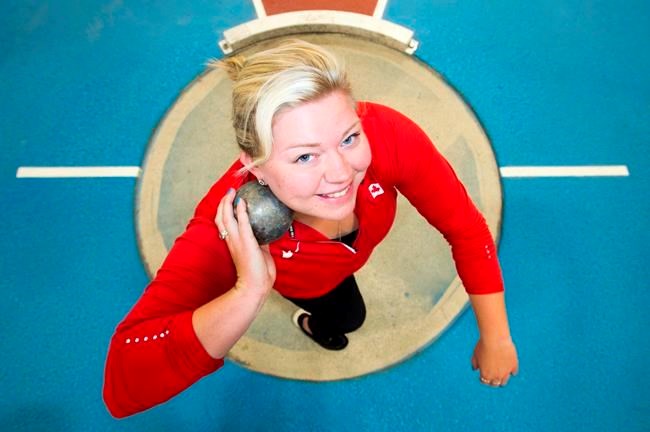 TORONTO — Brittany Crew is at home in the shot put circle, where she crouches with a steel ball buried in the crook of her neck before exploding in a spinning blur that's as much ballet as brute strength.

It's where Crew overcame bullying in school. Where she pulled herself back from the brink of depression and drinking. And where she became an Olympian and a national record-holder.

The 23-year-old from Toronto will compete at the Canadian track and field championship this week in Ottawa to officially book her spot on the team for the world championships in London in August.

It's been an incredible turnaround for the thrower who a couple of years ago was working two jobs — at McDonald's and Loblaws — and binge drinking on weekends.

"I've come great strides, let's put it that way, in the last three years," Crew said with a smile. "I've kind of turned my life upside down."

Or right side up.

Crew is enjoying a breakout season, shattering the Canadian record twice in May over the span of 48 hours. She broke Julie Labonte's record set in 2011 when she threw 18.47 metres, then went even better two nights later with a toss of 18.58, a distance that ranks her 12th in the world in an event where athletes traditionally peak much older.

Crew had a chaotic upbringing with drug addiction part of her family dynamic. Sports was her escape. She'd grab her soccer ball and head for the park.

"Sports has always been my coping mechanism," Crew said. "I'd come home from the park and I'd feel better."

Soccer was her first love. But she took up track at the encouragement of a high school coach who said she had the perfect build to be a thrower — she's been five foot 10 since Grade 6.

A woman's shot put weighs 8.8 pounds, around the weight of an average newborn. Men throw 16 pounds, the weight of a bowling ball. Crew describes the sport as "controlled chaos," a mix of finesse, speed and strength.

"A lot of people will attribute it to being a ballerina, but a really fast and strong one," Crew said.

Still, she wasn't sold on shot put at first.

"Especially when you're in high school and you're a female, you're just trying to find your way, and it's a masculine sport, you get bullied for that," she said.

She wrote a paper on body image for a university kinesiology class, addressing society's skewed version of the ideal female body as "that thin girl with the six-pack abs."

"As shot putters you cannot look like that and throw it far ... because your body is a machine, and that's what's getting you to where you need to be," Crew said. "If I were to lose 20 pounds I wouldn't throw as far as I do now.

"I got to the point where I didn't care anymore. If a guy's not going to like me because of the way I look, well then you're not worth being with anyhow."

Crew excelled in the sport in high school. She set a Canadian interscholastic record and later accepted a full scholarship to Eastern Michigan University.

In her freshman year, she tore the ulnar collateral ligament in her elbow before ever competing in an NCAA outdoor meet. Unable to throw, a thick fog of depression rolled in. She thought about suicide.

"I went from six hours of training a day to maybe an hour of training a day because they wouldn't let me do anything," Crew said. "I'm just the type of person, I need to do something. Your self-esteem just gets crushed when you can't do what you want to do.

"You define yourself as an athlete, and if you can't do that anymore, then what are you? That's what I was going through, I didn't know who I was without doing track and field."

She moved back to Toronto and started working the two jobs.

"And then every weekend I was going out and I was partying because I'm injured, I was depressed," she said. "And then it's like, 'Uck, I can't train today because now I'm hung over, I don't feel well.'"

She was living with her grandmother, whom she credits with getting her back on her feet. She called Richard Parkinson, who coaches throwing for Athletics Canada out of York University. And she enrolled at York.

Because of the long commute from her grandmother's house to school for 7 a.m. practices, she started crashing at Parkinson's house the odd evening. She laughingly called herself a part-time Stouffville resident, where Parkinson lives with his wife Andria Case, a CTV news anchor.

"I feel like they're my second parents," Crew said. "Richard and Andria have that positive attitude ... they mean a lot to me. When I go there I don't think about anything negative. I don't think about wanting to go out partying, because it's so nice and calm. We'll watch a movie, like a family."

Parkinson is proud of Crew's progress, in track and in life.

"I think a lot of (her progress) has to do with her maturity as an athlete and as a young woman. She's coming into her own. And she has stability."

Crew won last year's Canadian championships to earn a trip to the Rio Olympics, where she was ninth in her qualifying group. During the Olympic team announcement at Edmonton's City Hall, Crew ducked out early.

It was a lot to take in.

"I just got so overwhelmed ... just the steps I had to take to get there, and it just made me really emotional," Crew said. "I had to leave. The tears were all the struggles and all the heartaches I went through to make the Olympics. I was just so proud of myself that I did it."