MIAMI — Bianca Andreescu says she's pushed herself through injury before to the point of making things worse. So as tough as the decision to retire in the final of the Miami Open was for Andreescu, she says it was the right choice.
Apr 3, 2021 4:20 PM By: Canadian Press 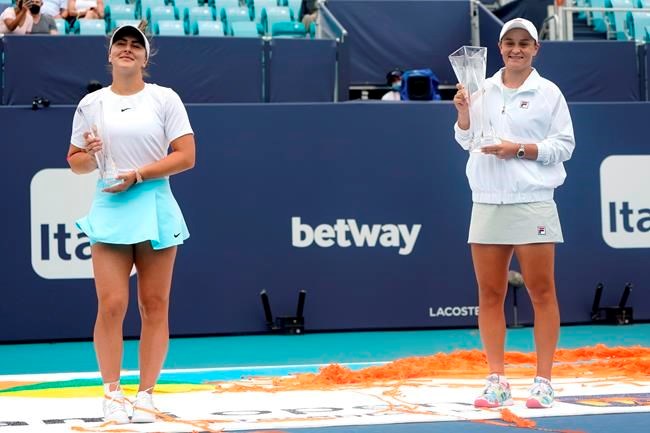 MIAMI — Bianca Andreescu says she's pushed herself through injury before to the point of making things worse.

So as tough as the decision to retire in the final of the Miami Open was for Andreescu, she says it was the right choice.

The 20-year-old Canadian stopped play due to a right foot injury after falling behind 6-3, 4-0 against top-ranked Ash Barty of Australia on Saturday. Andreescu said she wanted to press on, but heeded the advice of her trainer Abdul Sillah.

"I really didn't want to stop but Abdul my fitness trainer, he basically saved me from myself," an emotional Andreescu said after the match. "Because I've been through that. Just continuously pushing myself to the point where I'd make it worse.

"He just saved me from myself. I said 'I don't want to (retire),' but I trusted him and I knew it was the best decision."

Andreescu has been beset by injuries over her short but successful career, and didn't play at all in 2020 after suffering a knee injury at the 2019 WTA Finals.

She said she has learned from past mistakes pushing through injuries.

"No one wants to end a tournament retiring, especially in the final. But things happen, and I want to look ahead in my career," she said.

"I'm only 20 and I'm not trying to risk anything right now. I already did a couple of years ago, and I didn't want to make that same mistake again."

The eighth-seeded Andreescu, from Mississauga, Ont., tumbled to the court in the third game of the second set and struggled with her movement after the fall. She was wearing tape just above her right foot for the entire final of the WTA 1000 event – one level below a Grand Slam.

Andreescu called a medical timeout to receive treatment from a trainer after Barty finished the game with a break to go up 3-0.

She returned for one more game, but wasn’t moving well.

Afterward, she put her hand to her face as she tried to hold back tears before going to the net to greet Barty and end the match.

Andreescu said Barty, who won her second straight Miami Open title, had encouraging words for her.

"She said 'It was great playing. I'm so sorry. I hope you get better and I know we're going to be seeing each other a lot on the other side of the net.'

Andreescu said the next step is figuring out the extent of her foot injury.

"Right now I'm going to see what's up with my foot and start visualizing the healing process if it's something bad, and taking everything I've learned from this tournament into the next couple of tournaments," she said.

The injury put an end to Andreescu's best tournament since capturing the U.S. Open title in September 2019.

While it wasn't the final she wanted, Andreescu found plenty of positives.

"It felt like I played three tournaments in one with all the time I had on court, which is awesome considering I haven't been playing a lot," Andreescu said. "It's nice to have all of this under my belt."

Andreescu returned from a 16-month layoff in February at the Australian Open, losing in the second round of the Grand Slam. She suffered a knee injury late in 2019 and opted not to try to make a comeback earlier in the pandemic in 2020.

The 20-year-old Canadian followed up her first tournament back by reaching the semifinals of an event in Melbourne for players eliminated early from the Australian Open, but a leg injury suffered there kept her out until Miami.

Andreescu will rise three spots to No. 6 in the world rankings next week.

After winning four three-set matches in a row to reach the final, Andreescu struggled to find any rhythm against Barty in their first career meeting.

Barty was far better with first serve, winning 77.8 per cent of her points as compared to 45.2 for Andreescu.

"She doesn't play like a lot of players on tour," Andreescu said of Barty. "She likes to mix it up like me and that's not fun to play against. I guess I'm getting a taste of my own medicine."

Andreescu has retired with injuries in both of her appearances in Miami — her only two losses in North America since the start of 2019.

Barty overpowered Andreescu early to jump in front 3-0 before the Canadian broke back to cut the deficit to 3-2.

But on Andreescu’s next service game, the Australian responded. Two winners after Andreescu fought off two break points put Barty up 4-2 for the decisive break. The world No. 1 then won every point on the ensuing serve game to take charge of the first set.

Barty, playing outside of Australia for the first time since February 2020, was one point from defeat in her opening match against Kristina Kucova. She gained momentum from there and will keep her No. 1 ranking next week.

“It’s a great start for us,” Barty said. “I'm looking forward to what will hopefully be a big season for us, and hopefully we can play some really good tennis.”