TORONTO — Patrice Bergeron scored early in the second ovetime and the Boston Bruins beat the Carolina Hurricanes 4-3 on Wednesday in Game 1 of their first-round series that was postponed 15 hours to a rare late-morning start.
Aug 13, 2020 1:50 AM By: Canadian Press 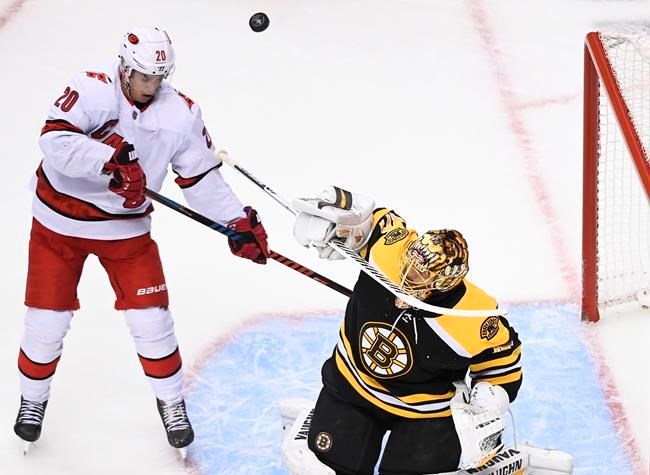 TORONTO — Patrice Bergeron scored early in the second ovetime and the Boston Bruins beat the Carolina Hurricanes 4-3 on Wednesday in Game 1 of their first-round series that was postponed 15 hours to a rare late-morning start.

Hurricanes-Bruins Game 1 wasn’t quite the same marathon with Bergeron scoring 1:13 into the second extra period. But it had plenty of from Carolina’s surprise scratches to a controversial goal and video review.

Joel Edmundson, who wasn’t with the Hurricanes last year and joined them in a trade from the St. Louis Blues after winning the Stanley Cup, opened the scoring 13:02 into the first period.

The way Boston tied it was plenty familiar, with its fearsome first line of Bergeron, Brad Marchand and David Pastrnak connecting. Bergeron won a faceoff to Marchand, who fed it to Pastrnak for the league-leading goal-scorer to finish it off at the 17:45 mark of the first.

The Bruins took the lead when Charlie Coyle scored 4:38 into the second. But goaltender Petr Mrazek was livid, and coach Rod Brind’Amour challenged for what the Hurricanes thought was a missed hand pass by Boston’s Brett Ritchie. Officials and the NHL’s situation room ruled that Mrazek trying to cover the puck negated the hand pass. Brind’Amour was fined for his postgame comments.

Josh Bailey scored a shorthanded goal 6:52 into the third period and New York overcame a two-goal deficit to beat Washington in a hard-hitting opener to the first-round playoff series.

Jordan Eberle and Anders Lee scored 1:54 apart spanning the second intermission. Semyon Varlamov stopped 24 shots and Anthony Beauvillier sealed it by scoring with 8:05 remaining in a game the Islanders overcame their own lack of discipline in allowing the Capitals seven power-play opportunities.

The Capitals finished the game without top-line forward Nicklas Backstrom. Lee set the physical tone of the game by knocking over Backstrom with a late hit in the opening minutes, which led to the Islanders captain fighting Washington John Carlson. The Capitals did not provide any details in announcing Backstrom would not return after playing seven shifts.

Carter Hart made 27 saves, Joel Farabee scored 16 seconds after Montreal tied it, and Philadelphia beat the Canadiens in Game 1 of their first-round playoff series.

Montreal, the final club in the NHL’s 24-team restart, stunned the Pittsburgh Penguins — who had the NHL’s seventh-best record when the schedule was halted because of the COVID-19 pandemic — 3-1 in the best-of-five qualifying round to book a place in the 16-slot playoff bracket.

Philadelphia sat fourth of four teams vying for the No. 1 seed in the Eastern Conference, then beat Boston, Washington and Tampa Bay by a combined 11-3 in the round-robin tournament to grab top spot.

Down 1-0 after a tentative first, the Canadiens showed more life and got even with 5:22 left in the second when their power play, which came in a league-worst 0 for 12 in the , finally connected. Hart stopped Weber’s one-time blast, but the puck popped out of a crowd in front for the Montreal captain to snap it home.

The teams were even for exactly 16 seconds, with Farabee picking up his own rebound deflection.

Colorado dominated the Coyotes through the first two periods, outshooting them 29-7, yet couldn’t get anything past goalie Darcy Kuemper.

Grubauer made the saves when he had to for his second career playoff shutout and Kadri broke a scoreless tie by punching in a rebound on a power play with 7 minutes left.

The Avalanche broke it open from there.

Compher scored on a backhanded rebound and Mikko Rantanen made it three goals in 1:23 to give Colorado the lead in the best-of-seven series heading into Game 2 on Friday.

Game 2 is set for Friday night.

Jacob Markstrom made 29 stops for the win.

The Canucks were making their first playoff appearance since 2015, having defeated the Minnesota Wild in the qualifying round.