ORLANDO, Fla. — The Vancouver Whitecaps are leaving Florida drained and tired but with another crucial victory. Brek Shea scored the winner against his former Orlando City teammates in Vancouver's 2-1 victory on Saturday night.
Aug 26, 2017 11:44 PM By: Canadian Press 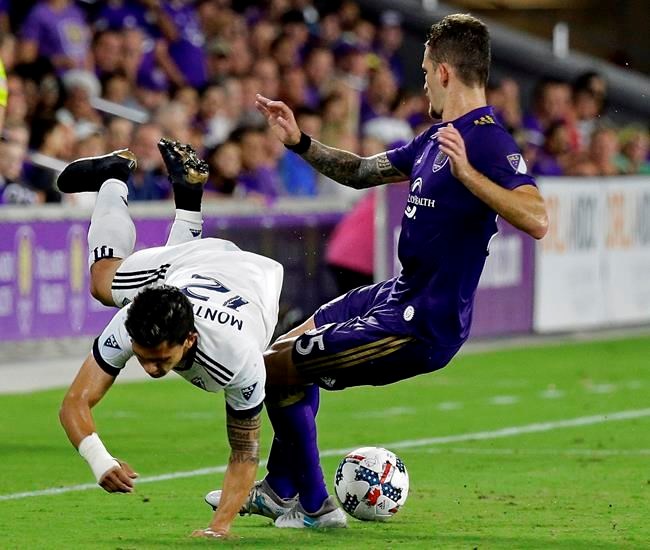 ORLANDO, Fla. — The Vancouver Whitecaps are leaving Florida drained and tired but with another crucial victory.

Brek Shea scored the winner against his former Orlando City teammates in Vancouver's 2-1 victory on Saturday night. It was the Whitecaps' third game in eight days.

"I'm exhausted and I didn't play," Vancouver head coach Carl Robinson said. "So every one of them in there deserves a huge pat on the back because we had a travel day from hell two days ago, obviously we were a lot bit tired yesterday.

"We were battered and bruised after a tough game Wednesday night against our neighbours. (The players) deserve a lot of credit."

Erik Hurtado gathered in a turnover at midfield and turned upfield before feeding the ball left to Shea, who was traded to Vancouver before the season. Shea dribbled in and chipped the ball over Joe Bendik in the 53rd minute for his third goal.

Shea said that the experience of returning to play his former club was overwhelming.

"It's a place that I've only been for two years but it felt like forever," he said. "I love the fans, the city and the organization. It sucked when I left but I'm in a new home, I'm happy and like I said I was happy to be back."

The win moved the Whitecaps into a tie with Houston for fourth place in Major League Soccer's Western Conference.

Vancouver (11-9-5), which leads the league in set-piece goals, opened the scoring in the ninth minute when Nicolas Mezquida's long free kick went in off Orlando defender Tommy Redding's head.

The Whitecaps had made nine changes to its lineup that drew the Seattle Sounders 1-1 on Wednesday night at B.C. Place Stadium.

After coming on at halftime, Cyle Larin put Orlando on the board with his 10th goal, heading home a cross from Yoshimar Yotun in the 62nd minute.

Orlando (8-11-7), which controlled over 70 per cent possession, is winless in its last six home games and is five points below the playoff line.

Note: The Whitecaps get a weekend off due to the FIFA international break before returning to host Real Salt Lake on Sept. 9.