PHOENIX (AP) — Devin Booker had 40 points, 13 rebounds and 11 assists for his first career triple-double and the Phoenix Suns overcame Chris Paul's absence to beat the Los Angeles Clippers 120-114 on Sunday in Game 1 of the Western Conference finals.
Jun 20, 2021 6:36 PM By: Canadian Press 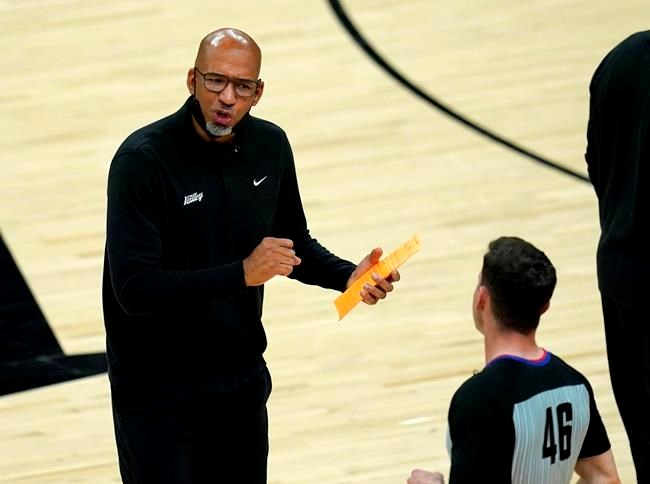 PHOENIX (AP) — Devin Booker had 40 points, 13 rebounds and 11 assists for his first career triple-double and the Phoenix Suns overcame Chris Paul's absence to beat the Los Angeles Clippers 120-114 on Sunday in Game 1 of the Western Conference finals.

Paul sat out because of COVID-19 health and safety protocols. Clippers star Kawhi Leonard missed his third straight game because of a sprained right knee.

Booker scored on a dunk on the next possession to seal Phoenix's seventh straight victory, getting a free lane to the basket on the blown defensive coverage.

Game 2 is on Tuesday night in Phoenix.

Booker was productive and efficient in one of his best games of his career. He shot 15 of 29 from the field, carving apart a defense that had to play just 36 hours after closing out the Utah Jazz on Friday night.

The third quarter featured a stellar scoring duel between Booker and L.A.'s Paul George, who finished with 34 points. Booker scored 18 points in the quarter, and George had 15, including a 3-pointer that tied it at 93 heading to the fourth.

The Suns led 76-68 midway through the third but George scored eight straight points — including six points on two long 3-pointers — to tie it up. It was the start of a 16-2 run that helped Los Angeles take an 84-78 lead.

Booker and the Suns responded quickly. Booker scored 12 points — mostly on mid-range jumpers — in the final 3:09 of the third to get Phoenix back on track.

The game was a rare stage for both franchises: The Clippers are in the Western Conference finals for the first time in franchise history, while the Suns haven’t been this far in 11 years and have never won an NBA title.

The Clippers got a boost from veteran big man Demarcus Cousins in the second quarter. He came into the game and almost immediately threw down a monster dunk over Dario Saric. He scored 11 points on 4-of-6 shooting in his first five minutes on the court.

The talented but oft-injured Cousins has only played in two playoff games this season. The four-time All-Star averaged 7.8 points in 16 regular season games with the Clippers this season.

Suns general manager James Jones was named the NBA's Executive of the Year on Sunday. Team President Robert Sarver surprised Jones with the announcement in a short ceremony at midcourt a few minutes before tipoff.

Jones came to the team two years ago and has helped build the Valley's best team in 11 seasons. His big move was adding Paul during the offeseason but he's also made other key moves, like adding Payne, Torrey Craig and drafting Cameron Johnson.

The low-key Jones was a man of few words when handed the microphone by Sarver, thanking the crowd and then adding one sentence.

Clippers: Leonard and forward Serge Ibaka (back surgery) didn't play. Clippers coach Tyronn Lue said on Saturday that Leonard was getting treatment on his knee in Los Angeles and wasn't sure about his availability in Game 2.