TORONTO — The Blue Jays are turning to a backup plan after finding out they wouldn't be allowed to play any games at Toronto's Rogers Centre this season. They just don't know what the plan is yet.
Jul 18, 2020 9:35 PM By: Canadian Press 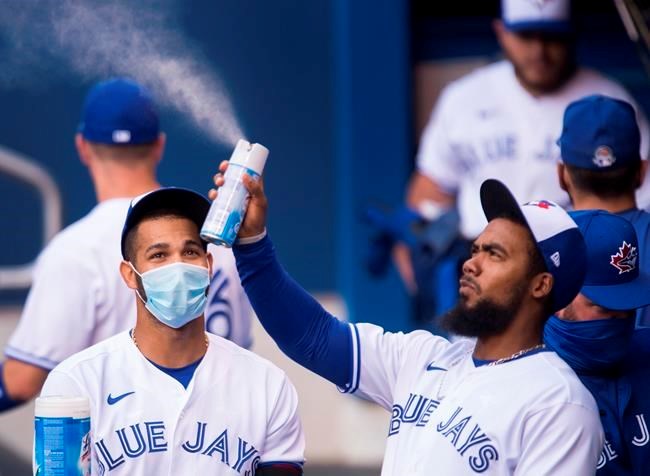 TORONTO — The Blue Jays are turning to a backup plan after finding out they wouldn't be allowed to play any games at Toronto's Rogers Centre this season.

They just don't know what the plan is yet.

"I'm 100 per cent confident we'll have clarity in the next couple days," Jays president and CEO Mark Shapiro said Saturday in a conference call hours after the federal government rejected the club's plan to use their home stadium, citing concerns about the back-and-forth travel over the United States border.

"Through a series of calls with the (MLB) commissioner (Rob Manfred) today, spent a lot of time talking about alternatives... I don't feel anything is clear enough yet."

Before the federal government's decision the Blue Jays said their spring-training facility in Dunedin, Fla., was their most likely venue for games if they couldn't play in Toronto.

However, COVID-19 has hit Florida hard in recent weeks, with some calling the state the new epicentre of the virus.

The Buffalo News reported last week that the Blue Jays have reached out to the owners of their triple-A team in Buffalo, N.Y., to discuss the possible use of Sahlen Field.

Shapiro said both options are currently on the table, as well as the idea of looking elsewhere if need be.

Dunedin is "100 per cent seemless, ready to go," in terms of facility. But player health challenges exist there.

Sahlen Field, minutes away from the Peace Bridge connecting Fort Erie, Ont., and Buffalo, presents facility and infrastructure challenges and would need to be brought "up to major league standards" before Toronto's scheduled home-opener July 29 against the World Series champion Washington Nationals.

"Buffalo's the place we've spent the most time on in the last 10 days... (but) a lot we have to do. I'm confident it's a viable alternative with the amount of resources we focus solely on Buffalo.

Buffalo Mayor Byron Brown used social media to support the idea of the Jays playing in his city.

"As Mayor of Buffalo, I would love to see the @BlueJays play at Sahlen Field," Brown said on Twitter.

The Blue Jays will be the lone MLB team not to be playing in their usual home stadium during the 60-game season, which starts next week. Toronto is scheduled to start the season July 24 at Tampa Bay.

While the government gave the green light to the Blue Jays to hold training camp at their downtown facility during the COVID-19 pandemic without the normal 14-day quarantine for those entering Canada, Ottawa said no to a request to have a similar setup for Canada's lone MLB team and visiting teams for regular-season play.

"However, unlike pre-season training, regular-season games would require repeated cross-border travel of Blue Jays players and staff, as well as opponent teams into and out of Canada. Of particular concern, the Toronto Blue Jays would be required to play in locations where the risk of virus transmission remains high," Mendicino said in a statement.

"Based on the best-available public health advice, we have concluded the cross-border travel required for MLB regular season play would not adequately protect Canadians' health and safety. As a result, Canada will not be issuing a National Interest Exemption for the MLB's regular season at this time."

Shapiro called the decision disappointing but said he respects it. He gave health officials credit for mitigating the spread of the virus.

Ottawa turned down the Blue Jays' plan, despite the Ontario government having approved it earlier this week.

"Ontario's Chief Medical Officer of Health approved the safest plan possible in the event Major League Baseball (was) permitted to play regular season games in Toronto," Ivana Yelich, Premier Doug Ford's spokeswoman, said in an email. "We support the federal government's decision not to allow cross-border travel at this time as we continue to fight to contain the spread of COVID-19 in Ontario and across Canada."

"All governments worked well together to try to reach a positive answer on this but we all knew there was no easy answer notwithstanding the incredibly detailed protocols put forward by everyone associated with the Blue Jays and Major League Baseball," Tory said in a statement.

Blue Jays pitcher Hyun-Jin Ryu spoke about the situation through a translator.

"COVID-19 still exists and there are hardworking people on the front line trying to battle the virus. You have to respect the Canadian government's decision to keep the nation safe," said Ryu.

"We don't even know where we are going to end up playing the regular-season games but as players we are all just trying to rally together."

Shapiro said whatever decision for a home stadium is made, nothing will replace playing in Canada.

"We move forward with no excuses. All of our alternatives are going to be imperfect."

This report by The Canadian Press was first published July 18, 2020