NEW YORK — Cast off by the World Series champions, Miguel Montero has a new home north of the border.
Jul 3, 2017 9:55 PM By: Canadian Press 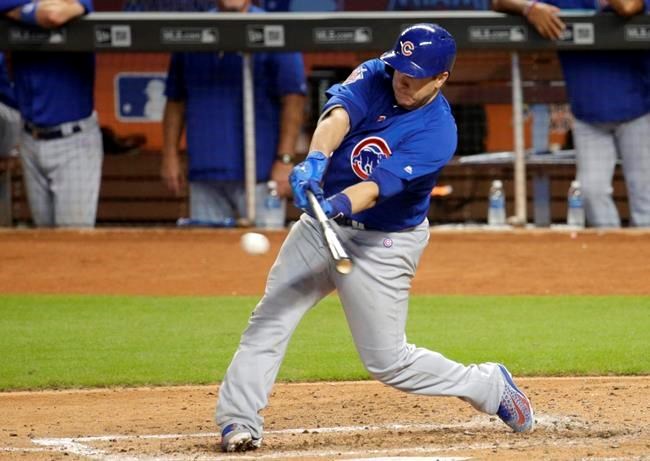 NEW YORK — Cast off by the World Series champions, Miguel Montero has a new home north of the border.

The veteran catcher was traded by the Chicago Cubs to the Toronto Blue Jays on Monday, six days after he blamed Cubs pitcher Jake Arrieta for allowing seven stolen bases in a 6-1 loss to Washington.

Toronto acquired the two-time All-Star and cash for a player to be named or cash. Blue Jays manager John Gibbons said Montero will join the team Tuesday at Yankee Stadium.

"I've heard some good things about him. I heard he can swing the bat. We'll see. He's a good, veteran, left-handed bat," Gibbons said.

Montero hit .286 with four homers and eight RBIs in 44 games this season and was designated for assignment Wednesday. He has thrown out one of 31 base stealers this season.

The 33-year-old from Venezuela has a .260 career average with 124 homers and 542 RBIs in 12 seasons with Arizona and the Cubs. His 10th-inning RBI single gave Chicago a two-run lead in Game 7 of last year's World Series, a game the Cubs hung on to win 8-7 for their first title since 1908.

After the season, however, Montero said he wasn't happy about his diminished role during the .

Last in the AL East, the Blue Jays cleared a spot on their 40-man roster by transferring outfielder Darrell Ceciliani (left shoulder) to the 60-day disabled list.

In another move, Toronto called up right-hander Mike Bolsinger from Triple-A Buffalo to provide a fresh arm in the bullpen Monday night against the Yankees. Right-hander Glenn Sparkman was designated for assignment.

Sparkman, a Rule 5 draft pick from Kansas City at the winter meetings, made two relief appearances for Toronto and was hit hard Sunday by Boston.