OTTAWA — Give Aladdin's lamp to any modern-day golfer and expect some fantastic demands: balls that never get lost, a driver that hits it 350 yards, a can't-miss putter.
Jun 15, 2017 7:00 AM By: Canadian Press 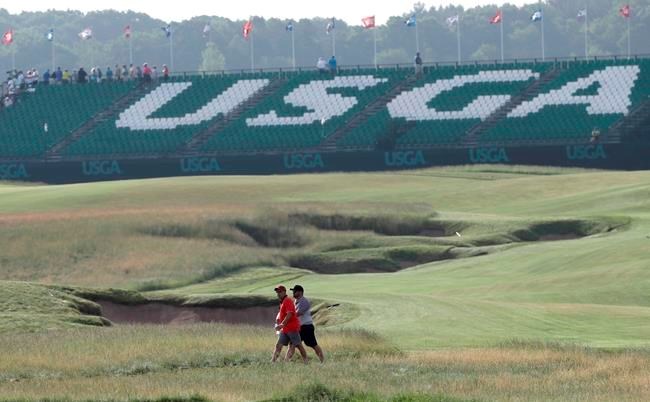 OTTAWA — Give Aladdin's lamp to any modern-day golfer and expect some fantastic demands: balls that never get lost, a driver that hits it 350 yards, a can't-miss putter.

But a portable, high-definition electronic caddie that magically tracks your score, measures distances, pinpoints weaknesses in your game and even recommends what club to hit?

Save that wish, genius: you have one in your pocket already.

Whether it’s Bluetooth-based game tracker systems like Arccos, swing trainers like Zepp Golf, "4-D" motion capture systems or the Blast Motion putter sensor, technology is putting new insights into the game and the golf swing right in the palm of your hand.

Just be careful. A little knowledge can be a dangerous thing.

"It's never been a better, easier time to get good at golf," says Kevin Haime, founder of the Kevin Haime Golf Centre in Kanata, Ont., one of the best-known golf teachers in the Ottawa area and an enthusiastic proponent of swing-tracker technology.

"Between smartphones in your pocket and some of these great, easy-to-use apps and statistics at your disposal — you just have to be smart about it, not get overwhelmed, and ask a few questions of a coach who can help you out.

Arccos Golf, introduced in late 2014, uses unobtrusive Bluetooth sensors that attach to each club's grip and sync with an iPhone or Android app. The sensors detect each time a ball is struck, mapping shots precisely on a satellite image of the golf course — a blow-by-blow, bird's-eye view of the round.

Last month, the company introduced Arccos Caddie, a subscription-based add-on that assesses a player's tendencies — distances for each club, misses on approach shots, up-and-down percentages out of bunkers — and plots the smartest course of action, all before you've even teed it up.

Another cool feature: download any of the more than 40,000 courses in the system — including 7,800-yard behemoth Erin Hills, site of this week's U.S. Open Championship — to see how Arccos Caddie would recommend you play each hole.

The latest version, known as Arccos 360, retails in Canada for about $335.

"I do believe Arccos is going to be embedded in every single club by 2020; that's my mission, to make that happen," says Arccos chief executive Sal Syed, who describes the company's year-over-year growth at "about 100 per cent."

In the year since Arccos launched in October 2014, the system logged 120,000 rounds of golf around the world. As of the end of April of this year, rounds worldwide totalled 725,000.

Joe Martin, an avid golfer and Arccos devotee from Jacksonville, Fla., has been hooked on the system ever since its introduction — in large part because it calls for little on-course fidgeting, unlike other early systems that required sensors to be re-paired before each swing.

"Once you put the sensors on the clubs and pair them, you can put them in the bag and basically forget 'em," says Martin.

"That freed me up from having to worry about counting strokes and keeping score, and I could just focus on the game."

Another fringe benefit: using modern technology to link real-life, grass-and-fresh-air golf to a smartphone screen sounds like a sure-fire way to get a reluctant kid out from in front of the PlayStation.

"The younger generation — and I witness this in my children and grandchildren — they're rarely without some device in their hand," Martin says.

"The ability for them to record their games and then go back and look at it, dissect it, I think is going to be an added feature for the tech generation. I think that's going to be a positive in terms of the game of golf and the planning and execution of the game."

Where Arccos can track players on the golf course and map out their tendencies, other Bluetooth-based trackers like Zepp and Blast Motion are at their best when deployed on the practice range and the putting green.

The Zepp sensor attaches to a golf glove and records information like swing tempo, club plane and clubhead speed, syncing to an app that rates each swing and offers high-speed, high-definition video capture and downloadable, customized lessons. It sells in Canada for $180.

The Blast Motion sensor works in a similar way, but on the butt end of the club. It’s most effective with the putter, tracking myriad statistics like tempo, backswing length and even the amount the face of the putter rotates through impact. Blast retails for about $210.

For Haime, Blast Motion has become a must-have teaching tool — especially when it comes to finding the sweet spot between the often-baffling physics of golf mechanics and the game’s more elusive, metaphysical properties.

"It's science, but to me if the science can integrate with the subconscious and just the rhythm of the game, I think that's really special," he says, describing how inexperienced, "jabby" putting strokes can smooth out over the course of just a few putts.

"We've had great results — young juniors get on this, just putting, and within five or 10 putts, they've all of a sudden got this great, rhythmic putting stroke. It's pretty neat."

Most golf teachers, including Haime, encourage golfers to get professional help from time to time just to make sure they’re on the right track.

"It can get confusing if you’re trying to do it all yourself, for sure," he says.

"It's like Bugs Bunny taking a wrong turn at Albuquerque — you think you're slicing because the ball's going right, so you start aiming even more left, which makes you slice even more."

For Syed, that’s where the modern push towards artificial intelligence comes in. Ultimately, it won’t be up to the player or even the teacher to figure out what the numbers all mean. Before long, there will be an app for that, too.

"We don't want people going and trying to dig through data and discover it, because nobody will, or people will come to the wrong conclusions," says Syed.

"It's through AI and machine learning that we can find out what is the most valuable thing about your game, so you can play better and get better."

Sound like a fable? Ask Martin, whose handicap has gone from 12 to six in the 30 months he’s been using the system.

"Part of that is because I'm playing more," Martin admits, and it's true: some of the new devices do make the game more fun to play.

"The other part is the fact that I have some good data to use in making decisions that hopefully has made me a smarter golfer."