LAS VEGAS — Looking down the barrel of some significant luxury tax penalties, Toronto Raptors GM Masai Ujiri is moving swiftly to get below the tax line while keeping his team competitive in the wide-open Eastern Conference.
Jul 9, 2017 4:07 PM By: Canadian Press 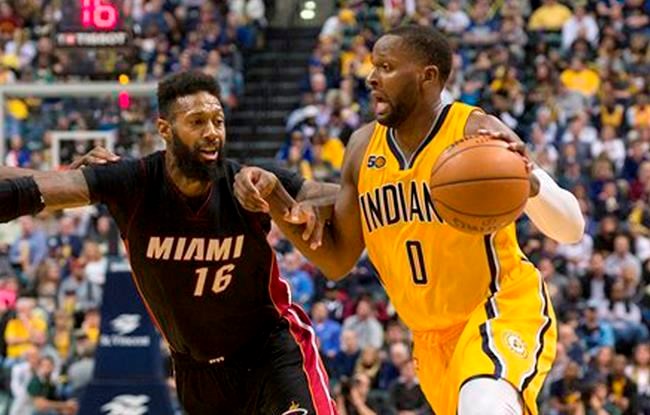 LAS VEGAS — Looking down the barrel of some significant luxury tax penalties, Toronto Raptors GM Masai Ujiri is moving swiftly to get below the tax line while keeping his team competitive in the wide-open Eastern Conference.

Ujiri pulled off two trades in about 12 hours, sending veteran forward DeMarre Carroll to Brooklyn in a salary dump and landing C.J. Miles in a sign-and-trade with Indiana for Cory Joseph, three people with knowledge of the dealings told The Associated Press.

The Raptors and Nets agreed to the Carroll deal late Saturday night, with Toronto sending a future first- and second-round pick to Brooklyn with Carroll and getting Justin Hamilton in return.

The deal allowed Toronto to offload Carroll's remaining two years and $30 million from its books, which helped the Raptors dip below the punitive luxury tax line in a summer when they re-signed point guard Kyle Lowry to a three-year, $100 million deal.

Carroll was coming off a disappointing season in which he averaged 8.9 points on 34 shooting in 72 games. Still, his abilities as a defender and his veteran presence were important for a Raptors team that is trying to close the gap on LeBron James and the Cleveland Cavaliers, who swept Toronto out of the Eastern Conference semifinals.

So Ujiri moved quickly to plug the hole, agreeing to terms with Miles on a three-year, $25 million contract and sending backup point guard Cory Joseph to the Pacers to complete the trade. The 30-year-old Miles is coming off one of the best seasons of his career. He shot 41 from 3-point range and is an accomplished defender as well.

The Minnesota Timberwolves were also negotiating with Miles in a potential trade that would have sent Cole Aldrich to Indiana. But the Wolves refused to add Oklahoma City's lottery protected 2018 first-round pick they got from Utah in the trade for Ricky Rubio to make the deal palatable for the Pacers.

For rebuilding Brooklyn, it was the latest in a series of moves designed at accumulating as many quality assets as possible. GM Sean Marks has been creative in his willingness to accept contracts other teams view as onerous in exchange for valuable pieces.