OTTAWA — After being forced to watch the Redblacks' championship run from the sidelines last season, running back William Powell is understandably eager to suit up for Ottawa's Grey Cup rematch with the Calgary Stampeders.
Jun 22, 2017 4:30 PM By: Canadian Press 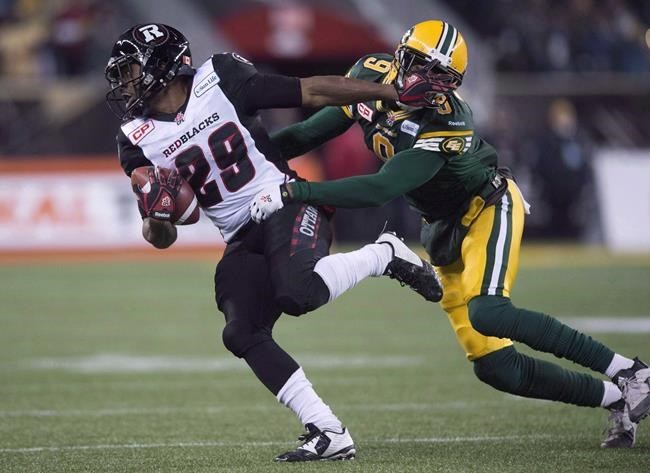 OTTAWA — After being forced to watch the Redblacks' championship run from the sidelines last season, running back William Powell is understandably eager to suit up for Ottawa's Grey Cup rematch with the Calgary Stampeders.

Powell missed the entire 2016 campaign after tearing an Achilles tendon in a pre-season game. His long road back is almost over, and he'll be ready to play when the Redblacks open the season against the visiting Stampeders on Friday.

"Honestly, I am so anxious and excited for this game," Powell said. "All the time being out and sitting back and waiting builds up a lot of anxiety, but now I'm just so ready to go. I have a lot of motivation behind me by sitting out so long."

Prior to his injury last season the Redblacks had high hopes for Powell and he hopes to live up to that potential this season.

"I'm a very confident player and just try to stay level-headed and don't get too high or too low, but I want to make some big plays," he said.

Many saw first-hand how hard Powell worked to get back and ready for action and are thrilled to see him get another opportunity.

"I'm excited to see him play," said Redblacks head coach Rick Campbell. "I'm excited for him as a person because he came back from a bad injury, but also excited for our football team because he's a good football player and we saw that at the whole second half of 2015.

"You could easily argue going into last year he could have been one of our most impactful offensive players and to lose him in the pre-season game was a downer for all of us so it will be good to see him back out there. He's a guy who can make something out of nothing."

The Redblacks know they will be in tough against the Stampeders, but like the idea of starting the season with a challenge.

"I feel like the first game is always a measuring stick," said offensive lineman SirVincent Rogers. "Ideally you want to come out and be as hot as you can. I've seen teams come out slow and so you always measure the rest of the season off that first game so we want to come out and do all the things that we're capable of and be victorious."

The Redblacks have a number of new faces, but special attention will likely be given to receivers Kenny Shaw and Diontae Spencer, brought in due to the departure of veterans Ernest Jackson and Chris Williams.

Both came over from the Toronto Argonauts and were teammates of Ottawa quarterback Trevor Harris.

"We've put in a lot of work and it's going to be good to take it all out against another team," said Shaw. "I think it's good facing Calgary. We're not getting a pushover team, it's a top calibre team and we're ready for the challenge."

One newcomer can't wait for the opportunity to beat the Stampeders.

"There are only two teams I've never beaten in my career, one was Ottawa and the other is Calgary," said Khalil Bass, a former member of the Winnipeg Blue Bombers. "Now I'm a Redblack so I want to beat Calgary just for the fact that I've never beat them, but everybody else in here is fired up because of what happened in the Grey Cup game."

The Redblacks will host a brief ceremony prior to the start of the game to commemorate last year's Grey Cup victory.