Toronto FC returns to action Saturday healthier and more optimistic after going into the international break with an underwhelming 1-4-2 record.
Jun 18, 2021 3:30 PM By: Canadian Press 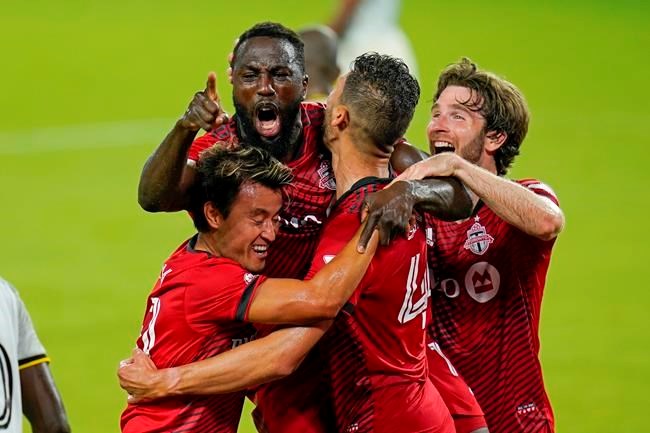 Toronto FC returns to action Saturday healthier and more optimistic after going into the international break with an underwhelming 1-4-2 record.

While there is still no resolution on the future of disgruntled striker Jozy Altidore, only long-term casualties Ifunanyachi Achara (knee), Julian Dunn (hip) and Yeferson Soteldo (thigh) remain out as Toronto takes on Orlando City SC (3-1-3) at Exploria Stadium.

"This is as healthy as we've been all year," said coach Chris Armas. "And we've seen what that has meant. We've been able to push the envelope in training and get everyone on the same page … It feels like we're close to normal here."

Both Toronto and Orlando last played May 29, suffering 2-1 losses at Columbus and the New York Red Bulls, respectively.

The loss to the Red Bulls ended Orlando's six-game (3-0-3) undefeated start to the season, a run that included a 1-0 win over Toronto on May 22 at Exploria Stadium. That match saw Altidore substituted in the 70th minute, a move that led to a confrontation with Armas in the aftermath.

The 31-year-old Altidore remains on the outs with the club. The U.S. international, in his seventh season with TFC with 75 goals in all competitions, is training away from the first team while talks are held on his future.

Spanish playmaker Alejandro Pozuelo made his season debut against Columbus off the bench, seeing his first 35 minutes of action after being sidelined by a thigh injury in pre-season. The league's reigning MVP went back to Spain during the break for the birth of his third son.

Venezuelan winger Erickson Gallardo is back training. He aggravated a groin injury April 7 in a CONCACAF Champions League match against Mexico's Club Leon and has not played since.

"We're happy with what we see with him," said Armas.

Soteldo, the club's third designated player alongside Altidore and Pozuelo, is doing some training but is likely a couple of weeks away.

Armas was quick to praise Orlando coach Oscar Pareja for how he has turned around the club.

"From a culture to adding some pieces to creating a winning mentality to the way they play, they're a good opponent for us." he said. "It's a good test."

"A good team with a good coach that has them playing really well," echoed midfielder Jonathan Osorio. "I think it's a team with a lot of confidence and it shows in the standings."

On the plus side for Orlando, Portuguese star attacking midfielder Nani returns from a two-game suspension that kept him of the last meeting with Toronto. And forward Daryl Dike is back after a productive loan stint with England's Barnsley.

But Peruvian goalkeeper Pedro Gallese and Ecuadorean midfielder Sebas Mendez are away on international duty. And Brazilian fullback Ruan remains out with a lower-body injury..

“Excited to get back to the competition again, especially to play against a good rival in Toronto that we faced already a few weeks ago," Pareja said. "(We're) trying to get the whole group together again after having players at their national teams, some players carrying injuries and things like that."

Saturday's game is officially a Toronto home match and will be closed to spectators. That will change June 22 when Orlando hosts the San Jose Earthquakes with a full-capacity crowd expected.

Altidore's future with the club remains uncertain, with GM Ali Curtis hinting there have been more issues than the recent run-in with Armas.

"This is a guy who has been fundamental to the club for many years," said Osorio, when asked about the issue. "So it's tough to see a situation like this … But at the same time, I don't think it's my business to talk about that."

"I hope it gets resolved in the best way for everybody involved," he added.

HISTORY: Toronto has won eight of the 13 meetings all-time (8-3-2). All three Orlando wins have come on its home ground.

MILESTONES: Nani’s next goal will tie him with Kaka for second in Orlando club history in all competitions (25). Canadian Tesho Akindele’s next goal will be his 40th in MLS regular-season play. He has scored 15 goals for Orlando and 24 for FC Dallas.

This report by The Canadian Press was first published June 18, 2021