PITTSBURGH — The Pittsburgh Penguins' Stanley Cup championship, the first an NHL team has won back to back in almost 20 years, spawned by far the biggest victory parade of any of the franchise's five titles.
Jun 15, 2017 1:58 AM By: Canadian Press 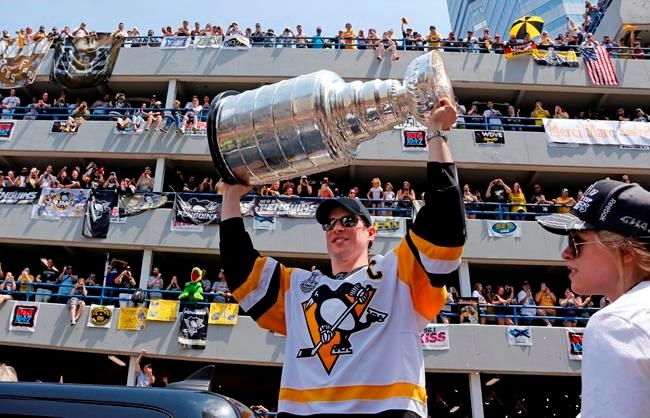 PITTSBURGH — The Pittsburgh Penguins' Stanley Cup championship, the first an NHL team has won back to back in almost 20 years, spawned by far the biggest victory parade of any of the franchise's five titles.

An estimated 650,000 people turned out along a downtown parade route that ended with a rally at Point State Park, city public works and public safety officials said Wednesday. A sunny day with temperatures in the 80s didn't hurt, as the smell of sunscreen was as pungent as the Penguins' love in a city that boasts, officially, only 305,000 residents.

"These guys are fierce competitors," coach Mike Sullivan told the crowd from a stage in the triangular park formed by the confluence of the city's three rivers. "They just know how to win."

Roughly 400,000 fans attended last year's celebration, which was the biggest for any of the team's Stanley Cup championships to that point.

The Penguins won the cup Sunday against the Nashville Predators with a 2-0 win in Game 6. And judging from signs and chants from the crowd, this championship was sweetened by the adversity the team overcame.

Playoff MVP and Penguins captain Sidney Crosby was knocked out for the better part of two games with a concussion against the Washington Capitals, and the Penguins played without their best , Kris Letang, who had neck surgery before the playoffs.

As the players took the stage to PPG Paints Arena announcer Ryan Mill's introductions, fans also learned that Ian Cole, another , played through a broken hand and broken ribs. And Nick Bonino, who broke his leg blocking a shot but still finished Game 2 of the finals before missing the rest, hobbled around on crutches while taking selfies with fans.

A couple of bittersweet story lines punctuated the festivities: 40-year-old veteran Matt Cullen, who has won two Cups since joining the Penguins as a free agent last season, has hinted he might retire, prompting fans to chant, "One more year!" And, perhaps the best story of the playoffs was how former starting goalie Marc-Andre Fleury regained that job when rookie Matt Murray was injured during warm-ups in the first game of the playoffs. Fleury was in net for nine of the 16 victories the Penguins needed to win the Cup before Murray returned from injury to replace Fleury after a shaky third-round game against Ottawa and was in net for Pittsburgh's final seven playoff wins.

Fleury, one of the most popular Penguins with fans and teammates, is likely to leave when the new Las Vegas franchise drafts its players or in an trade.

Phil Kessel, another fan since the Penguins acquired him from Toronto two seasons ago, drew some of the biggest cheers.

Fan Kristen Pearce, of Green Bay, Wisconsin, drove down to Kessel, a Wisconsin native, and was lucky enough to have him autograph her jersey and her sign, which read, "We drove from Wisconsin to see our Stanley Cup champion!"

Some fans lined up the night before, and most waited several hours for the parade to start.

Karla and Don Donahue drove 30 miles from Freeport to claim their seats in Point State Park at 2:30 a.m. This was the third victory parade for the Donahues, who also attended in 2009 and 2016.

Karla Donahue said if they aren't at the games they're watching on TV.

"If we're somewhere else, it's on the radio," she said. "We haven't missed a game in years."

This story corrects the first name of a Penguins player to Nick Bonino.