ROME — IOC President Thomas Bach gave his blessing Thursday for the joint Milan-Cortina d'Ampezzo bid for the 2026 Winter Olympics to move forward without funding from the Italian government.
0
Nov 8, 2018 10:26 AM By: Canadian Press 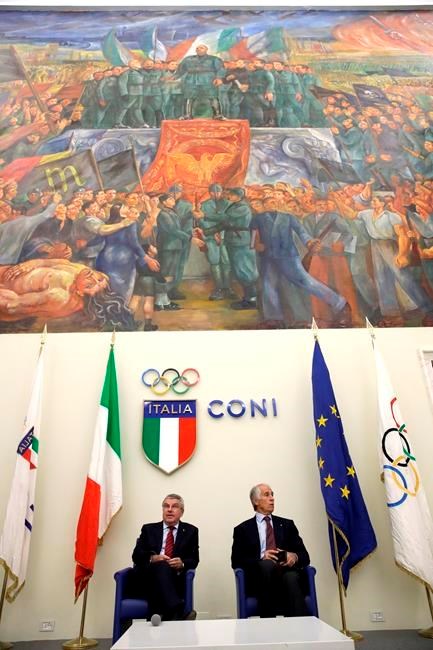 ROME — IOC President Thomas Bach gave his blessing Thursday for the joint Milan-Cortina d'Ampezzo bid for the 2026 Winter Olympics to move forward without funding from the Italian government.

The candidacy is being supported exclusively — financially at least — by the regional governments of Lombardy and Veneto.

"This candidature is very strong because it reflects the reforms of Olympic Agenda 2020," Bach said at the conclusion of two days of meetings in Rome. "The guarantees which have been expressed by Lombardy and Veneto are very important to secure the overall candidature. That is well appreciated by the IOC."

Italy Deputy Premier Luigi Di Maio said last month that the government will send a letter of support for the bid to the International Olympic Committee "but as government we won't provide 1 euro — neither for direct nor indirect costs."

Funding from federal governments has always been one of the keys for Olympic bids but Agenda 2020, Bach's wide-ranging reform package passed in 2014, allows for more flexible rules.

Lombardy and Veneto are two of Italy's most affluent regions.

Bach said that government undersecretary and sports delegate Giancarlo Giorgetti assured him that Italy "is ready to deliver the guarantees about free entry and security which would be needed from the federal government."

"We are leaving Rome and Italy with much more confidence about this candidature," Bach said. "We really see things coming along."

Calgary and Stockholm, the other two cities bidding for the 2026 Games, have more serious funding issues.

Calgary's town council voted in of its bid this week but on condition that it can secure satisfactory funding to cover operational costs of the games.

The local government in Stockholm, too, has balked at spending taxpayer money on the event.

The host will be selected by the IOC in a vote on June 24 in Lausanne, Switzerland.

Another potential hurdle for the Italian bid rose recently when the ruling coalition led by the anti-establishment 5-Star Movement and right-wing League party suggested it is considering taking over the distribution of financial funding for sports from the Italian Olympic Committee (CONI).

Under current conditions, CONI decides how to divide the more than 400 million euros ($450 million) in annual funding from the government between the various national sports federations. If the function is removed, it would greatly reduce CONI's power.

"Clearly finding a solution to this issue has taken precedent over everything else," CONI president Giovanni Malago said.

Added Bach: "After the talks with CONI and with the undersecretary Giorgetti, I'm very confident there will be a solution found which will be in the interests of Italy and the interests of sport."

The Milan-Cortina bid was originally slated to be a three-pronged candidacy including Turin, which hosted the 2006 Winter Games. But infighting led to Turin being dropped.

Under the revised plan, hockey and speedskating — which had been slotted for venues built for the 2006 Turin Games — would be held in Milan along with the opening and closing ceremonies.

Alpine skiing would be held in 1956 host Cortina, while biathlon would be slated for nearby Anterselva — a regular stop on the biathlon World Cup circuit.

Other snow sports could be held in Bormio, north of Milan, while ski jumping could be held at an existing facility in Predazzo, which would mean involving a third region — Trentino-Alto Adige.

Italy is anxious to bring a bid through the entire process after two Rome candidacies were withdrawn.

When asked if the IOC had a backup plan if all three of the 2026 bids withdraw, Bach responded: "The answer is no."

Amid reports that Buenos Aires and Ushuaia, Argentina, are interested in formulating a 2026 bid, Bach rejected re-opening the race.

"We are in the race for 2026 and we will not change the rules in the middle of the race," he said. "On the other hand, we are very happy to see already now there is good interest to host the Winter Games in 2030. We have a number of notifications from national committees interested."

Bach said there is also plenty of interest for the 2032 Summer Games.

"This is a clear demonstration of the appeal and relevance of the Olympic Games," Bach said, "and confidence in the way the IOC is undertaking its reforms to organize the Olympic Games in the future."