OTTAWA — Prime Minister Justin Trudeau's chief of staff says she wonders whether she could have done more to fight sexual misconduct in Canada's armed forces, but refused to say how her boss was kept in the dark about an allegation against the former
May 7, 2021 4:59 PM By: Canadian Press 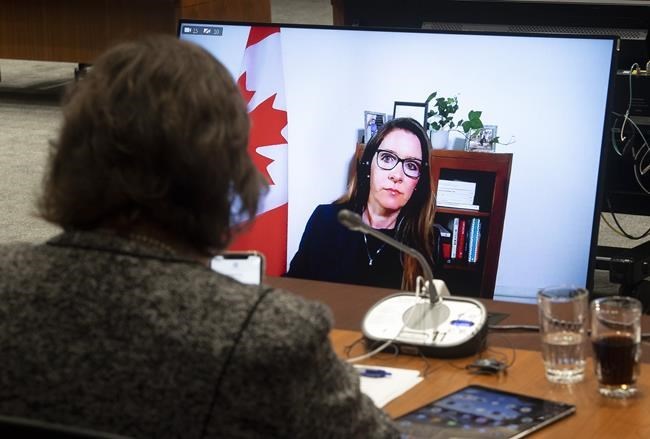 OTTAWA — Prime Minister Justin Trudeau's chief of staff says she wonders whether she could have done more to fight sexual misconduct in Canada's armed forces, but refused to say how her boss was kept in the dark about an allegation against the former top solider.

Katie Telford testified for nearly two hours at a parliamentary defence committee on Friday that she didn't learn the content of a complaint against Canada's ex-defence chief until it was reported publicly.

Opposition Conservatives have been pushing to find out what exactly she knew of the situation in 2018. They allege it's impossible she or Trudeau didn't know the allegation against general Jonathan Vance was a sexual one, and they argue the Liberal government failed to act on the matter, calling into question its feminist credentials.

Telford testified then-Trudeau aide Elder Marques told her at the time it was a "personal misconduct" complaint, and it was directed to the appropriate channel of the Privy Council Office, where it eventually stalled when details weren't provided.

"We were clearly told that this matter should be handled by (the Privy Council Office) and that it would have been inappropriate for political staff or politicians to be directly involved. The last thing I wanted to do was to do deny agency to the complainant," she told the committee.

But she said after Global News revealed earlier this year it involved an allegation of sexual misconduct, she has replayed past conversations in her head with female soldiers and asked herself what more she could've done to create a safe space.

She said she wonders if she could've pushed harder to ensure the implementation of a 2015 report by former Supreme Court justice Marie Deschamps that recommended an independent reporting system for sexual misconduct in the military.

Telford also said she has asked herself if she should've further questioned Vance when he told her about his commitment to the "Me Too" movement and how frustrated he was that orders were not enough to bring about change.

"Above all, though, I have thought about the brave women and men of the Canadian Armed Forces who face unthinkable and unacceptable harassment and misconduct in the line of duty," she said.

It's clear that more work needs to be done, and that's why the government has announced a new review led by former Supreme Court justice Louise Arbour aimed at creating external oversight, she said.

Telford's testimony came after the Tories pushed for Trudeau — who had denied personally knowing of any allegations — to fire her had she not informed him about the complaint. The move wasn't supported by any other opposition parties when it was put to a vote in the House of Commons earlier this week.

The Tories have pointed to emails exchanged by others around the issue that refer to sexual harassment, and called into doubt statements from Trudeau that he and others in his office didn't know the nature of the complaint.

"Because we didn't know what it was, there was a possibility that it could be that, that it could be a sexual allegation, and so that's why we were taking it so seriously at the beginning," Telford told MPs.

She also testified that she asked at the time whether safety was an issue and was assured it was not.

"If you didn't think this was a sexual misconduct complaint, what kind of a complaint did you think it was?" asked the NDP's defence critic Randall Garrison.

Conservative defence critic James Bezan and other MPs repeatedly pressed Telford on whether she purposely kept Trudeau in the dark about the allegation, and who decided not to tell him. She didn't directly answer.

"The simple fact is that if there was nothing to hide, then Katie Telford would have answered the question," the party said in a statement after Friday's meeting.

The allegation involved an off-colour email that Vance allegedly sent a junior officer in 2012, before he became defence chief.

Military police are now investigating that complaint as well as another allegation that Vance had a sexual relationship with another officer under his command.

Vance has not responded to requests for comment from The Canadian Press, but Global News says that he has denied any inappropriate conduct.