MIRROR, Alta. — RCMP ticketed protesters leaving an anti-lockdown rally outside a central Alberta café Saturday, after the establishment was closed by health officials earlier in the week.
May 8, 2021 7:49 PM By: Canadian Press 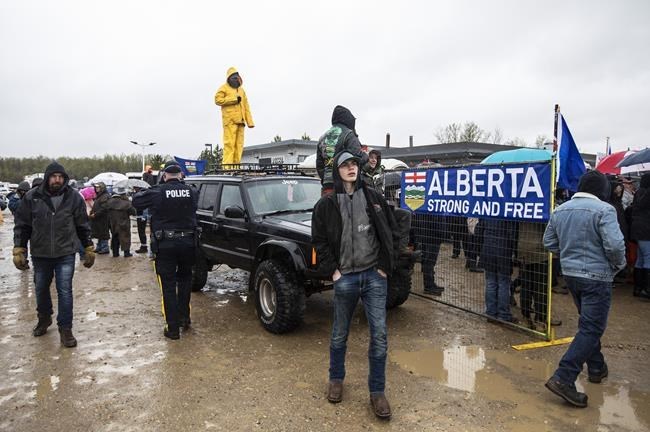 MIRROR, Alta. — RCMP ticketed protesters leaving an anti-lockdown rally outside a central Alberta café Saturday, after the establishment was closed by health officials earlier in the week.

Despite pouring rain and a pre-emptive court injunction, hundreds gathered outside the Whistle Stop Café in the hamlet of Mirror, Alta., for the "Save Alberta Campout Protest."

Demonstrators were there to support café owner Chris Scott and challenge Public Health Orders meant to curb the spread of COVID-19.

A spokesman for the RCMP said officers took the first three hours of the protest to educate demonstrators on COVID-19 regulations and notify them that they were contravening the injunction.

"There was a decision at one point to start mounting enforcement," said Cpl. Troy Savinkoff. "That was around 4 p.m."

Savinkoff said police would provide a more thorough update on how many people were ticketed later Saturday.

On Wednesday, AHS said it closed the café after the agency received more than 400 complaints about the business since January. Health authorities said the café is to remain closed until Scott can demonstrate the ability to comply with health restrictions.

Alberta Health Services said after hearing about plans for the protest that the provincial government would take legal action that would allow RCMP officers to use reasonable force in arresting and removing any person at the rally who contravenes public health orders.

But that didn't stop people without masks from standing together to cheer and clap when Scott stood on a stage and encouraged them to fight for their freedom.

"I'm not fine with anyone telling me what to do with my body or how to earn an income."

Scott then asked the crowd to follow COVID-19 regulations at the rally due to the injunction.

Three hours later, RCMP officers with body cameras began handing out tickets under the Public Health Act to those leaving the area for participating in the illegal gathering.