OTTAWA — Taxpayers will continue paying Julie Payette a generous pension and an even heftier expense account for the rest of her life, even though she served just three years as governor general and resigned under a cloud.
Jan 31, 2021 6:00 AM By: Canadian Press 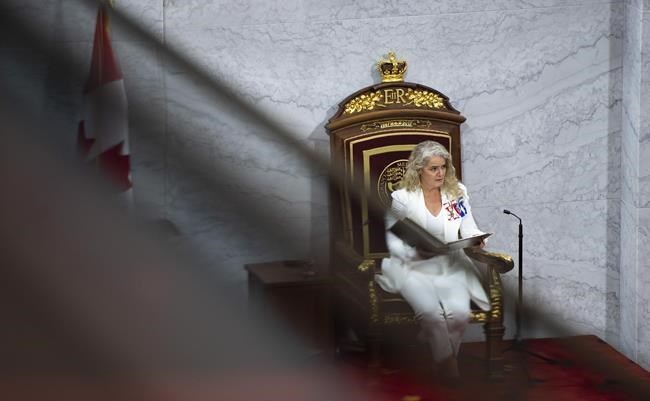 OTTAWA — Taxpayers will continue paying Julie Payette a generous pension and an even heftier expense account for the rest of her life, even though she served just three years as governor general and resigned under a cloud.

As a former governor general, she's entitled to an annual pension of nearly $150,000.

And she's entitled to claim up to $206,000 a year — for life and even six months after — to cover expenses incurred as a result of ongoing responsibilities related to her former office.

The circumstances of Payette's departure — an independent review that concluded she presided over a toxic workplace where Rideau Hall staff were yelled at, belittled and publicly humiliated — have shone a spotlight on the generous support offered to former governors general and raised questions about whether someone who leaves the post under a cloud should be eligible for it.

The pension is guaranteed under the Governor General's Act, which makes no distinction between someone who completes a five-year term without incident and someone who leaves early, for whatever reason.

Philippe Lagassé, a Carleton University professor who specializes in the roles of Parliament, the Crown, and executive power in Westminster states, says nothing prevents Parliament from approving changes to the law. It could be amended, for instance, to specify that in future the pension will be reduced or eliminated for someone who resigns early or departs amid scandal.

But he doubts it could be changed retroactively to reduce Payette's pension or strip it from her entirely.

"I'm not a lawyer ... but I think she would have a very good case if suddenly Parliament came in and went after her personally given that she went into the job with that (pension) as a condition and, frankly, in all likelihood it probably was not an insignificant part of her decision to leave," Lagassé says, adding such a retroactive move would set "a terrible precedent" for anyone who accepts a federal appointment.

Before making any changes to the pension entitlement, Lagassé says careful consideration should be given to the reason former governors general are given such a generous annuity in the first place.

"The pension is ultimately meant to ensure the independence of the office," he says.

A governor general can be called upon on occasion to make tough calls about whether to call an election or allow prorogation of Parliament. The guarantee of a pension is meant to ensure such decisions aren't influenced by concerns over how they might affect future employability.

"There shouldn't be any kind of consideration in this person's mind that, if they go one way or another, it might help them with their income or livelihood or comfort after holding the office," Lagassé says.

The expense account is entirely within the purview of the government to change or scrap, as it sees fit. The support program for former governors general was launched by a cabinet decision in 1979 and has been continued, without change, to this day.

According to the 1979 cabinet minute, the program was created in acknowledgment that even after they leave office, "former governors general incur responsibilities and are asked to undertake activities" as a result of their having once held the office.

"This is particularly true in the first few years after they leave office when they are effectively in a transition period between the responsibilities of office and their return to private life."

Nevertheless, the cabinet chose to authorize the annual expense account for life and even beyond, agreeing to reimburse expenses to the estate of a former governor general for six months after their death.

The program became controversial several years ago after the National Post reported that former governor general Adrienne Clarkson had claimed over $1 million in expenses since leaving Rideau Hall in 2005.

And that only came to light because she'd claimed more than $100,000 per year, which required disclosure as a line item in the government's public accounts.

Clarkson defended her expenses, arguing that she takes part in dozens of public events, gives speeches and answers 500 to 700 letters each year, all related to her former role as governor general.

Prime Minister Justin Trudeau ordered an independent review of the program, which was undertaken by consultant Alain Seguin, a former federal bureaucrat.

In his 2019 report, obtained by the Canadian Taxpayers Federation through access-to-information legislation, Seguin said all the expense claims he reviewed were well-prepared and detailed and he "did not see any expense items that could be deemed unreasonable."

Still, he criticized the lack of transparency and recommended requiring itemized expense claims to be publicly reported annually.

"The major issues in this review stem from a 40-year-old program that has never been reviewed and has never been modified since its inception," Seguin concluded.

"It has not been updated to reflect current public-sector practices and public expectations concerning reporting and accountability."

Seguin also recommended that consideration be given to ending the expense account after "a defined number of years rather than the current for-life regime."

Seguin delivered his report in October 2019 but the government has not acted on it.

"Work continues to determine how best to ensure that the program continues to function in an effective manner," says Beatrice Fenelon, spokeswoman for the Privy Council Office.

This report by The Canadian Press was first published Jan. 31, 2021.