OTTAWA — The cutthroat campaigning for a seat on the United Nations Security Council would hardly be described as a picnic or a walk in the park.
Jun 16, 2020 10:00 AM By: Canadian Press 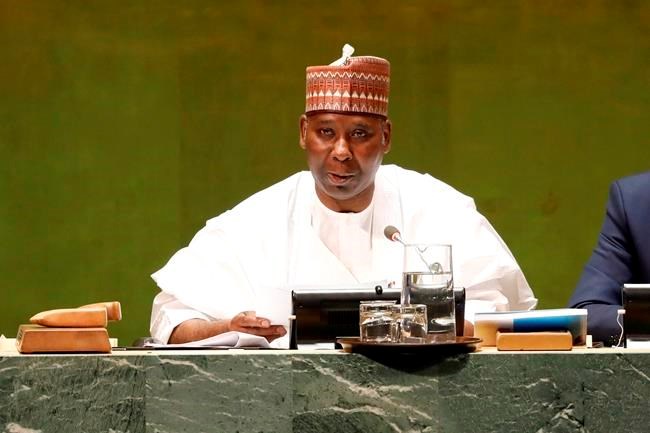 OTTAWA — The cutthroat campaigning for a seat on the United Nations Security Council would hardly be described as a picnic or a walk in the park.

But it has become just that as COVID-19's arrival in New York City transformed the face of international diplomacy, forcing Canada's diplomats to do things a little differently in its quest to win one of two seats on the council.

For Canada's UN ambassador, Marc-Andre Blanchard, physically distant events such as picnics, walks, the odd bicycle ride through Manhattan parks and visits to streets outside the official residences of fellow ambassadors have become features of his last few weeks of campaigning.

That's where Muhammad-Bande has come up with a plan he hopes will preserve the UN's voting traditions so all 193 General Assembly members can vote in secret — and in person — without inadvertently transforming their chamber into a pandemic hotspot.

That new pandemic reality is the backdrop for Wednesday's election for a two-year term on the UN's most powerful body. The competitive contest pits Canada against Norway and Ireland for two available seats.

"I spend long hours there; it's not like I've been away," Muhammad-Bande said in an interview.

He has forged unanimous agreement to a plan that will see UN ambassadors voting in small groups, an hour at a time, starting at 9 a.m. Wednesday, to keep numbers down and physical distance vast in the large assembly hall. Foreign Affairs Minister Francois-Philippe Champagne, who arrived in New York on Sunday by car from his riding in Shawinigan, Que., will cast Canada's vote over the noon hour, and then the ballots will be counted.

The two victors will need two-thirds support — or 129 votes each — and if that doesn't happen on the first ballot, the procedure starts over again on Thursday.

"The race is tight," Champagne said in an interview. "I've made north of 100 calls in the last two, three weeks, and talking to foreign ministers around the world, and here in also engaging with the permanent representatives in New York, I sense momentum. But obviously you have to be cautious."

Prior to the pandemic, Prime Minister Justin Trudeau attended the African Union summit in Ethiopia and made a bilateral visit to Senegal in February to campaign. The government dispatched former prime ministers Joe Clark and Jean Chretien to Africa and UN headquarters in New York to twist arms; it sent former Quebec premier Jean Charest to Arab states in the Gulf; Independent Sen. Peter Boehm, a retired career diplomat, went to a summit of Pacific small island states.

Boehm, who was Canada's ambassador to Germany in 2010 when it and tiny Portugal handed Canada its defeat the last time it competed for a seat, said it is "the ground game in New York," which has been well led by Blanchard, that is crucial in swaying the diplomats who will cast the actual votes.

"He's respected. He's liked, and we'll just have to see where it goes on Wednesday in this rather strange voting environment where voting will take place in waves over several hours."

Adding Champagne, who is a born campaigner, will only help, Boehm added.

Blanchard returned by car to New York last month, and though he has spent much time working out of his apartment, he has waded out regularly to meet his fellow ambassadors to press Canada's case, including brunch with physical distancing in place.

More forays were planned in the days that would follow.

"We're going into the park with some ambassadors. We agreed to have dinner on the ground," Blanchard said in a recent interview.

Blanchard said smaller countries appreciate the personal outreach because it shows "that Canada wants to be the voice of those countries on the Security Council and we take that seriously.

"This is why it's so important to earn their trust, to eventually hopefully receive their support."

The process itself sends a message to the world and the UN's critics, said Muhammad-Bande: the institution, for all its flaws, carries on despite a pandemic that has threatened democratic institutions globally.

"There is no issue of real loss because everyone has campaigned to serve," he said. "Whoever doesn't make it, will continue to serve. Things go on."

Muhammad-Bande said Wednesday's new voting procedures will mean stretching what would have been a one-hour process over five hours to lower the risk of spreading COVID-19.

"The main issue is the mechanics of it," he said. "How do you guarantee that everything will be done in such a way that no one will question the quality of the process?"

But when final votes are tallied, Muhammad-Bande said it will mark the start of a significant new round of diplomacy. The five permanent members of the council — the United States, Britain, France, China and Russia — have been tragically deadlocked in the past because each holds a veto.

Canada is campaigning on a platform of trying to unite the permanent five to help rebuild the post-pandemic world, by pledging to leverage the nine fellow non-permanent members to forge a consensus.

"The skills of the diplomats representing those countries will have an impact," said Muhammad-Bande, who is Nigeria's UN ambassador.

"It matters who is there," he added. "Because we do need this. Any improvement that will reduce the impasse, I think is a welcome one."

This report by The Canadian Press was first published June 16, 2020.