EDMONTON — Alberta’s justice minister says a COVID-19 disaster is what the provincial Opposition, the federal government and the media "were looking for and want" in the province.
May 10, 2021 7:26 PM By: Canadian Press 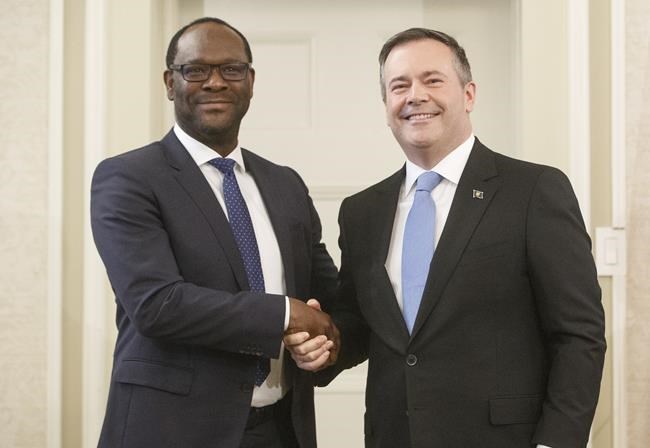 EDMONTON — Alberta’s justice minister says a COVID-19 disaster is what the provincial Opposition, the federal government and the media "were looking for and want" in the province.

Kaycee Madu, in Facebook comments posted Friday, said the province can't risk giving the disease a chance to "overwhelm our health-care system, then create public panic, and see Albertans in field and makeshift hospitals gasping for breath because we have run out of ventilators, manpower etc.

“I don’t think it will be responsible to simply wait until we have a disaster on our hands,” he added.

“That’s what the NDP, the media and the federal Liberals were looking for and want.”

Madu was not made available for an interview Monday.

His spokesman, Blaise Boehmer, said in a statement: “The minister was referring to the increasing tendency of different groups, including the NDP, to exploit the pandemic for their own political purposes.

“We see this every day with the NDP’s overcooked and incendiary rhetoric both in the legislative assembly and on social media.

“The minister won’t apologize for stating the obvious.”

NDP health critic David Shepherd said "what we want, and what we've wanted for the last 14 months, is to see responsible action from (the United Conservative) government … so that we would not be in the position now of Alberta being the worst jurisdiction in North America for COVID-19 new cases."

Political scientist Jared Wesley said Madu's comments raise concerns about the line in politics between respecting opponents while trying to defeat them politically versus trying to delegitimize them altogether.

"When you start accusing your opponents of literally wishing death on Albertans, that's a bridge too far,” said Wesley, who's with the University of Alberta.

"When it comes to being a minister of the Crown, when you are governing on behalf of the entire population, there's an extra onus on you to rise above that type of tribalistic rhetoric and behaviour."

Kenney’s government, in recent weeks, resisted calls for new health restrictions as Alberta COVID-19 cases climbed to record levels and doctors were given guidelines on how to triage patients should the health system become overwhelmed.

Kenney acted last Tuesday, sending all schoolchildren home to learn online while imposing sharper restrictions on capacity in businesses and in worship services.

The province also promised a renewed effort at enforcement. On the weekend, police made arrests and handed out violation tickets in Calgary and in central Alberta for public gatherings that violated health rules.

Madu's comments came days after Kenney, facing criticism that his government waited too long to react to the third wave, said no one should point fingers and politicize the fight against COVID-19.

Kenney and his minsters have repeatedly accused Prime Minister Justin Trudeau's Liberal government of hamstringing the relief effort and, as late as April 29, Kenney blamed Alberta's entire third wave on Ottawa for a slow vaccine rollout.

On Monday, Alberta recorded 1,597 new COVID-19 cases for a total active case count of 25,438. There are 690 people in hospital. Of those, 158 patients are in intensive care — the highest since the pandemic began.

Also Monday, Alberta opened up vaccine bookings for those as young as 12, with thousands getting processed soon after the online bookings went live at 8 a.m.

The expanded eligibility means that 3.8 million Albertans, out of a population of 4.4 million, are eligible to get vaccinated.