OTTAWA — The unprecedented nature of the economic and health crisis created by COVID-19 means the Conservatives are finessing their approach to their role as the Official Opposition, says leader Andrew Scheer.
Mar 22, 2020 7:10 AM By: Canadian Press 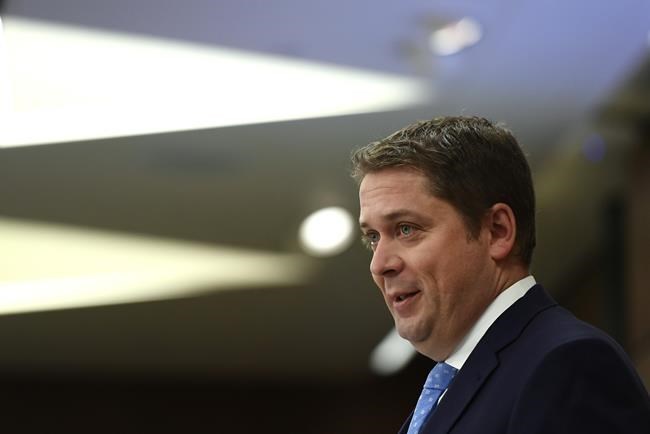 OTTAWA — The unprecedented nature of the economic and health crisis created by COVID-19 means the Conservatives are finessing their approach to their role as the Official Opposition, says leader Andrew Scheer.

Shelved — for now — is reflexive opposition to the Liberals because of the parties' differing philosophies on the role of government, Scheer said in an interview with The Canadian Press.

"There really isn't much philosophical difference when it comes to fighting a virus or keeping Canadians healthy and safe," he said.

What that means in practical terms as a minority Parliament gets set to deal with an $82-billion emergency aid package the Liberal government has promised is reframing how the party will approach its work, he said.

"It's less of a debate of the 'what' and more accountability on the 'how,' " he said.

Scheer said the Conservatives are also willing to cut the government some slack, recognizing the exceptionally fast way the situation has escalated, and at the same time to do more of their work behind the scenes.

He said they don't intend to hold up the Liberals' proposed package, but have been putting forward their own ideas on how to improve it, releasing a set of them on Saturday aimed at giving more support to small business in particular.

There are regular briefings for the party's critics on the key files affected by the crisis, who then pass on information to the broader caucus, while Scheer has spoken to Deputy Prime Minister Chrystia Freeland multiple times as well.

"We're just trying to make sure we can communicate directly with the government when we do have concerns or when we think that there may be gaps, that we do it directly and through channels that are really aimed at getting results and not so much scoring political points," he said.

A look at the party's social-media channels — the platform for some of its most partisan mudslinging — reveals a shift in recent days, with Scheer's account focusing heavily last week on amplifying the government's message to Canadians that they need to keep a safe distance from each other to prevent the spread of the virus.

Yet, said Scheer, it is early days still and no one can say how the situation will pan out.

So far, he said, all signs point to politicians' willingness to work together as best they can to provide Canadians some reassurance.

"One of my jobs is not just to hold the government to account but to also show Canadians that all politicians are going to put our partisan differences aside so we can get through this pandemic and provide the stability that Canadians are looking for," he said.

"And then when that's done we can resume the battle of ideas and the philosophical differences."

By the time it's done — experts say that could be months — Scheer could be finished as leader as well.

He's set to step down when his replacement is chosen in June, a race triggered well before the pandemic overtook regular political life.

There are four candidates on the ballot, two of whom — Peter MacKay and Erin O'Toole — have been taking hard shots at the government response to COVID-19.

Scheer acknowledged his potential successors may choose to handle the situation differently, calling that a "challenge," though he wouldn't comment on specific candidates.

"It's up to each individual leadership candidate to govern themselves accordingly," he said.

In the meantime, he and his wife Jill, and their five kids, are hunkered down in their Regina home.

They'd left Ottawa when Parliament was suspended, but thought it would just be for March break.

Briefings with his MPs are held by conference call, though he says the government's telecommunications seem to be bending under the strain.

The family is passing the time playing games, reading and trying to limit screen time as much as they can, in part by playing a bingo game that parcels out the day into 30-minute activity chunks.