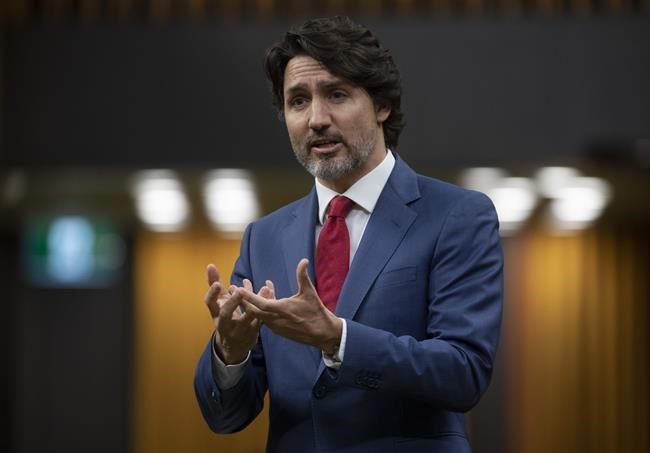 Fresh fears over more infectious variants, travel-related cases and the ability of the country's vaccine rollout to keep pace sparked scrutiny into pandemic strategy in various parts of the country, with Trudeau and Ford butting heads over rules at the border.

Trudeau dismissed Ford's claims that Canada's "borders are broken," maintaining that there are already tight controls on land crossings, including tests before and after arriving in Canada and mandatory two-week quarantines.

"We know importation through the borders is extremely low in terms of cases in the country — it's not zero," Trudeau told a news conference Friday. "But at the same time, we have seen that this third wave is very much around community transmission."

As the leaders squabbled over whether community or cross-border spread was to blame for the COVID-19 surge, Public Services and Procurement Minister Anita Anand said doses of the Pfizer-BioNTech COVID-19 vaccine will soon be sourced from the U.S. instead of Europe.

Starting next week, Canada will receive doses of the Pfizer-BioNTech COVID-19 vaccine from Kalamazoo, Mich., instead of Belgium, said Anand.

Canada's chief public health officer said Friday that daily COVID-19 case counts declined by seven per cent over the past week to an average of less than 7,900 infections.

Dr. Theresa Tam said the number of people with severe illness continues to rise, with an average of 4,400 hospitalizations each day over the past week, including 1,420 patients in intensive care.

An average of 50 deaths were reported daily over the past week, said Tam.

Meanwhile, Ford said he will not relent in his campaign to further restrict international travel "because too much is at stake."

If it were up to him, the premier said he'd shut down Toronto's Pearson International Airport and Ontario's land borders to keep variants of the COVID-19 virus out of the province.

"(The variants) got in because of weak border measures," said Ford. "I can't stress this enough. We will never get ahead of this virus if we can't keep these deadly new variants out of our country."

Travellers landing at Canada's international airports already have to stay in a federally approved hotel for three days while awaiting the results of a COVID-19 test done on arrival as part of a 14-day quarantine.

Iain Stewart, the president of the Public Health Agency of Canada, said 1,700 international air passengers have now tested positive for a variant of interest or a variant of concern while at a quarantine hotel.

Ontario has asked the federal government to impose mandatory three-day quarantines in hotels for travellers entering Canada at land crossings.

In a letter to Ottawa sent Thursday, Ontario officials said there have been reports of international travellers booking flights into nearby U.S. airports, taking a taxi to a United States-Canada land crossing and walking or driving across the border.

Ontario reported 3,887 new cases of COVID-19 on Friday and 21 more deaths linked to the virus.

Provincial health authorities said 2,201 people were hospitalized with COVID-19 – 883 are in intensive care and 632 are on a ventilator.

Out west, COVID-19 hot spots in a Rocky Mountain tourist town and northeastern Alberta's oilsands hub asked for more details from the provincial government before deciding to request curfews.

Alberta Premier Jason Kenney announced late Thursday that curfews could be imposed in municipalities where the virus case rate exceeds 1,000 per 100,000 people and if the local governments ask for one.

In British Columbia, solicitor general Mike Farnworth said police enforcing the province's ban on non-essential travel will only question drivers and not their passengers, so the stops at high-traffic corridors and two ferry terminals don't stray into potential investigations.

The province is also now offering the Oxford-AstraZeneca vaccine to people aged 30 to 39 with underlying health conditions, including severe obesity, chronic liver disease and HIV.

Health officials said there were 295 new COVID-19 cases and one death related to the virus.

On the East Coast, Nova Scotia reported 67 new COVID-19 cases Friday. The province also opened up access to the Oxford-AstraZeneca vaccine to people aged 40 to 54.

There were eight new COVID-19 cases in Newfoundland and Labrador, all but one of which were linked to travel within Canada, said officials.