FREDERICTON — New Brunswick's minority Progressive Conservative government has survived a confidence vote on its provincial budget as members of the legislature set aside partisan differences to focus on the COVID-19 pandemic.
Mar 13, 2020 3:23 PM By: Canadian Press 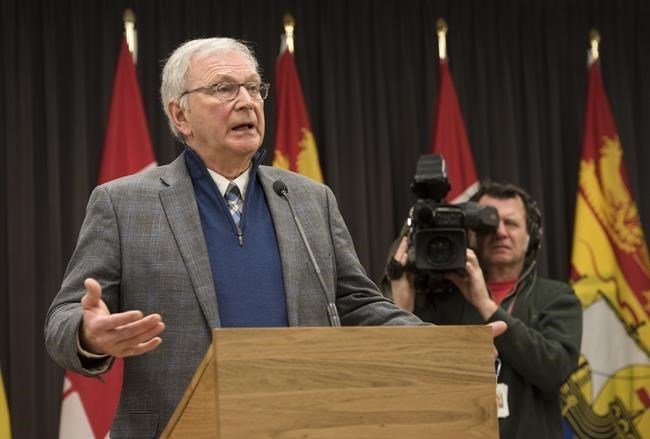 FREDERICTON — New Brunswick's minority Progressive Conservative government has survived a confidence vote on its provincial budget as members of the legislature set aside partisan differences to focus on the COVID-19 pandemic.

The vote was expected to take place next week, but all four party leaders agreed to hold it Friday amid coronavirus concerns in the province, and the budget passed by a vote of 24-0.

Premier Blaine Higgs thanked members for allowing the budget to pass so the government can deal with the challenges presented by the virus.

"Now our sole focus is on this health care crisis," Higgs said as he and the three opposition leaders stood side by side in the legislature rotunda.

"This is to show that we are aligned here and we're totally focused on the task at hand, and that's the virus and the effect it's having across this province," Higgs said. "We've never seen this before. We'll probably never see it again."

The 20 Progressive Conservative members plus the three members of the People's Alliance and Green Leader David Coon voted to support the budget while the remaining members of the legislature abstained.

The Opposition Liberals had vowed to try to topple the government as a result of recently cancelled health reforms. Earlier in the week they said the health crisis and the budget were two separate things, but on Friday Liberal Leader Kevin Vickers said the situation had changed.

"The change right now is the magnitude of what our citizens are facing with this pandemic, where things are changing hourly, putting the health and safety of our people at immediate risk. We want to make sure we all come together as one here in New Brunswick and assure New Brunswickers that everything possible that can be done will be done," Vickers said.

"Given the situation across the country and across the world, this is not a time to have an election," he added.

People's Alliance Leader Kris Austin said it was important to show unity because COVID-19 doesn't care what political stripe you are or where you're from.

"I think at this time this is an historic moment where you have four parties that are treating this is in a serious way," Austin said.

Green Leader David Coon said the idea of showing unity during the budget vote was developed at the last minute, and one factor was that the entire budget, including the projected surplus, will be available to deal with the health crisis.

"Money will flow where money needs to flow from this larger budget. That's why no one voted against this budget," Coon said.

New Brunswick so far has one confirmed case of COVID-19 — a woman in the southeast of the province who recently travelled from France.