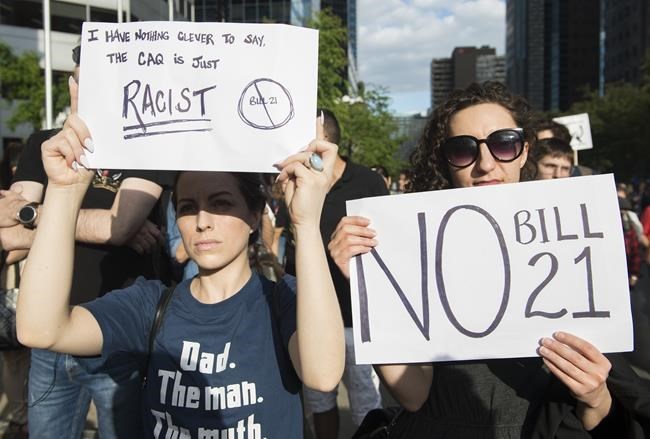 The National Council of Canadian Muslims and the Canadian Civil Liberties Association said in a statement Thursday the law known as Bill 21 makes Quebecers who wear symbols such as hijabs, turbans and kippas second-class citizens.

"We promised that we would not stop fighting until second-class citizenship ends for all Quebecers," said Yusuf Faqiri, the council's director of Quebec affairs.

Quebec Superior Court Justice Marc-André Blanchard acknowledged in his April 20 ruling that the law violates the rights of Muslim women and has dehumanizing consequences for those who wear religious symbols. But he largely upheld the law, which the province had shielded from charter challenges by invoking the notwithstanding clause.

Bill 21 was adopted in June 2019 and prohibits public sector workers who are deemed to be in positions of authority, including teachers, police officers and judges, from wearing religious symbols such as hijabs and turbans on the job.

The law makes pre-emptive use of the Charter of Rights and Freedoms' notwithstanding clause, which shields legislation from court challenges over violations of fundamental rights.

The Quebec government has said it will appeal because the ruling struck down clauses pertaining to English-language school boards and members of the provincial legislature. A teachers union has said it will also appeal, arguing the law infringes on the rights of its members to work in the profession.

Four separate lawsuits challenging Bill 21 were merged into one trial, which was held over several weeks at the end of last year.

Parties have 30 days to appeal and until an appeal is heard, the law remains in effect.