Manitoba, Nova Scotia cracking down amid surge in COVID-19 cases

Manitoba introduced tougher COVID-19 public health measures and Nova Scotia announced it would restrict entry amid a surge in infections, as Ottawa introduced new ways for small and medium businesses to access rapid tests to thwart workplace outbreak
May 7, 2021 7:55 PM By: Canadian Press 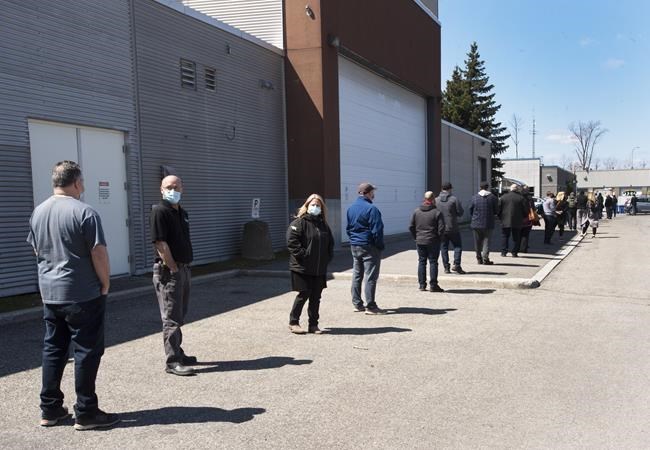 New infections are up 25 per cent over the last week in Manitoba. Friday's daily case count of 502 was the highest the province has seen since the middle of the pandemic's second wave last winter and intensive care beds are in higher demand.

So starting Sunday, the cap on outdoor gatherings in the province will drop to five people from 10. Restaurants, bars and patios will close to in-person dining but can still provide takeout and delivery services. Most indoor social visits were already banned.

Gyms, museums, art galleries and libraries will have to close and indoor religious services will be prohibited.

Fines for COVID-19 rule-breakers that currently range from just under $300 to $5,000 are also being doubled for subsequent offences.

In Atlantic Canada, Nova Scotia reported a new daily high of 227 new cases and Premier Iain Rankin said overwhelmed staff had yet to enter another 200 positive cases into the province's database.

Starting Monday at 8 a.m., the province's boundaries will be closed to all non-essential travel. That includes anyone intending to move to the province or parents from outside Nova Scotia hoping to pick up or drop off students.

"There's no coming in or out unless it's absolutely essential," Rankin said. "If you want to spend your summer here or go to your summer home, you can't do that right now."

Under the new rules, rotational workers returning home from so-called outbreak zones — such as the oilsands hub of Fort McMurray, Alta. — must self-isolate for 14 days. As of Saturday, all Nova Scotia households must also designate one shopper.

In Ottawa, Prime Minister Justin Trudeau announced rapid tests, which screen for the virus in as little as 15 minutes, can be ordered from 40 Shoppers Drug Mart locations in Ontario hot spots. The Canadian Chamber of Commerce's network is helping distribute kits to enterprises across the country.

Tests can also be ordered directly through a new federal online portal.

Perrin Beatty, CEO of the Canadian Chamber of Commerce, welcomed the move.

"Rapid testing will play an important role in keeping workers safe and helping many businesses reopen and stay open," he said in a news release. "That’s the only path to real, sustainable economic recovery."

The federal Conservatives accused Trudeau's Liberals of dragging their feet on rapid tests and said Friday's announcement came only after months of Opposition pressure.

Back in the west, some 2,000 Alberta truck drivers who transport goods across the border will, as of Monday, be able to receive the Johnson & Johnson vaccine at a rest stop in Montana at no cost and without appointments.

Saskatchewan and Manitoba have similar deals with North Dakota.

Alberta Premier Jason Kenney urged Ottawa to push the United States to relax its ban on shipping doses over the border.

Alberta leads Canada in COVID-19 cases and has a seven-day new infection rate twice that as the next highest province, Ontario. It tightened restrictions this week on retail, dining, personal services and gatherings so as to avoid pushing its health-care system beyond capacity.

It reported 1,980 new infections and 659 COVID-19 patients in Alberta hospitals, including 150 in intensive care.

Elsewhere on the Prairies, Saskatchewan reported 295 new cases and one more death. The province said all residents 12 and older will be eligible for their first vaccine shot by May 20.

In British Columbia, 722 new cases were reported as well as seven additional deaths.

Ontario recorded 3,166 new cases of COVID-19, but cautioned that number may be under-reported due to a technical issue. It had 23 more deaths linked to the virus and said hospitalizations there have dropped by 40.