OTTAWA — The Liberals have tabled a proposal that would see expanded Parliamentary meetings to discuss the government's response to the COVID-19 crisis as well as a handful sittings over the summer.
May 23, 2020 2:14 PM By: Canadian Press 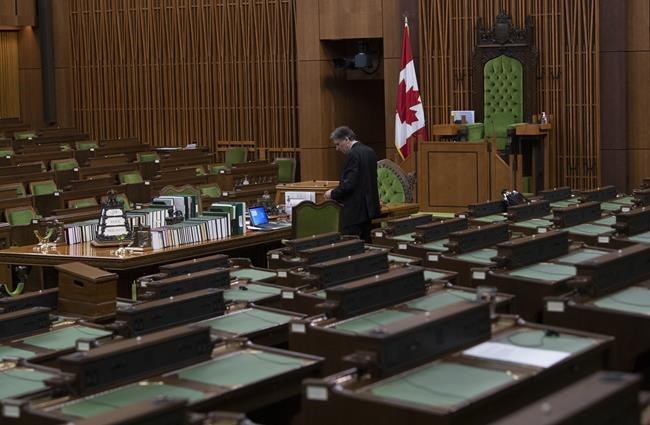 OTTAWA — The Liberals have tabled a proposal that would see expanded Parliamentary meetings to discuss the government's response to the COVID-19 crisis as well as a handful sittings over the summer.

The proposal is laid out in a motion that will be debated in the House of Commons on Monday.

The motion proposes to add an additional day to the weekly meetings of the special COVID-19 committee, which have been acting as a sort of stand-in for the Commons.

The special committee has been meeting in the House of Commons chamber once a week in person, with fewer than three dozen MPs actually present, and twice a week virtually.

The Liberals are now proposing four meetings a week until June 17 with a hybrid of in-person and virtual attendance that would see a small number of MPs in the chamber and others participating via two large video screens set up on either side of the Speaker's chair.

The motion also proposes four sittings of the House of Commons in July and August, each with a question period that would allow MPs the chance to ask cabinet ministers about issues unrelated to COVID-19 — a key issue of contention for the Conservatives in recent weeks.

Mark Kennedy, a spokesperson for Government House Leader Pablo Rodriguez, says if this motion is adopted, it would provide more hours for MPs to question government than they would have if Parliament was sitting normally.

He would not comment on the behind-the-scenes negotiations that have been ongoing among federal political parties over how Parliament should function as the COVID-19 crisis drags on.

Because they hold only a minority of seats, the Liberals need the support of at least one of the main opposition parties to pass the motion.

The NDP negotiated the terms of the motion with the Liberals and support it going to the House of Commons for debate, according to a senior party source who spoke on background because they were not authorized to speak publicly.

But the party has been using these negotiations to also push the Trudeau government to adopt NDP Leader Jagmeet Singh's calls for a 10-day paid sick leave for all Canadian workers to ensure all employees who contract COVID-19 will be symptom-free before returning to work.

The NDP also wants federal help for people with disabilities who are not eligible for the Canada Emergency Response Benefit.

Meanwhile, the Conservatives have had it with the COVID-19 committee. They've complained bitterly that it precludes them from asking the government questions on anything but the pandemic, although in reality that rule has not been consistently applied.

Conservative Leader Andrew Scheer called Friday for Parliament to be declared an essential service, allowing the House of Commons to resume its normal work schedule of five days a week — albeit with no more than 50 MPs sitting in the chamber at any one time in order to respect public health protocols on physical distancing.

That would allow MPs to resume moving motions, ask questions on whatever topic they like and engage in what Scheer called "proper debate" on government legislation, private members' bills and opposition motions.

The Conservatives also want to see all standing and special committees begin to meet virtually and for committees to have their normal powers restored.

Part of this request is reflected in the Liberal motion, which was put on notice Saturday.

It proposes to add the Standing Committee on Fisheries and Oceans to the list of seven other Commons committees that have been meeting virtually over the last several weeks to discuss COVID-19.

Under the Liberal proposal, these committees would be permitted to expand the scope of their discussions and studies beyond the topic of the pandemic, which to date has not been permitted.

The one big hurdle to the Commons resuming normal activity is that the chamber has not resolved how to go about allowing for MPs not in the Commons to vote electronically.

In their motion, the Liberals are proposing the Commons procedure committee should be tasked to review and make recommendations on how parliamentary rules could be changed to allow for remote voting.