OTTAWA — Liberal MP and former cabinet minister Jim Carr is returning to hospital for a stem-cell transplant, a treatment that had been twice delayed due to the COVID-19 pandemic.
May 5, 2020 11:57 AM By: Canadian Press 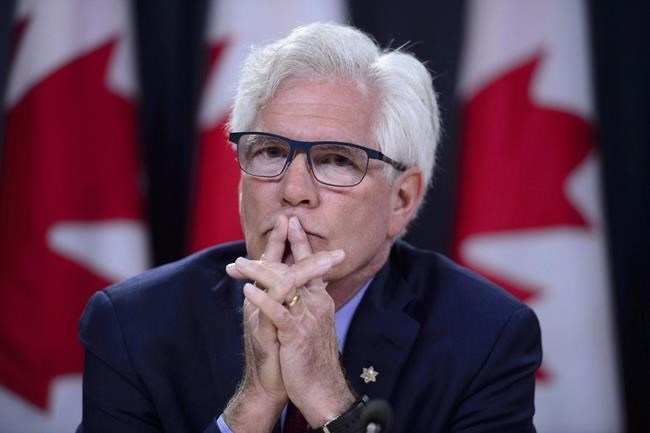 OTTAWA — Liberal MP and former cabinet minister Jim Carr is returning to hospital for a stem-cell transplant, a treatment that had been twice delayed due to the COVID-19 pandemic.

The Winnipeg MP shared the news on social media Tuesday morning, saying that he and his family remain grateful for all the support they have received since his cancer was discovered last fall.

He said he expects to be recovering in hospital for the next few weeks.

"The past few months have been a challenging and unprecedented time for everyone but I know that we will get through this and emerge stronger than ever," he wrote in a message posted to Twitter.

Carr had been diagnosed with multiple myeloma after experiencing flu-like symptoms during the 2019 federal election campaign.

In his own social-media post Tuesday, Carr's son Ben said life has not been the same for the family since the diagnosis, but the fact his father had been campaigning with failing kidneys and cancer running through his blood spoke to his character.

"Anyone who was with us during the campaign can tell you just how tough he is," he wrote.

Carr had headed into that campaign as the Liberals' international trade diversification minister, and was one of only a handful of Liberals re-elected in the Prairie provinces in the October vote.

He stepped back from cabinet following his diagnosis to undergo treatment, though Prime Minister Justin Trudeau appointed him as a special representative for the region.

"Less than a year ago he was Canada's trade minister, travelling around the world to make the country a better place," Ben Carr wrote.

"Lately, he's been resigned to his living room. A pretty tough reality to confront, no question."

His son said the stem cell transplant had been cancelled twice because of COVID-19, and the pandemic is also forcing the family apart during an exceptionally difficult time.

"For me personally, one of the worst parts of what's been happening is the loss of connection with my dad. Although we speak every day by video call, it isn't the same. No hugs, no shared meals, no sitting beside each other watching sports," he wrote.

He said normally he'd go visit his father during his recovery, but this time won't be allowed in the hospital.

The New Brunswick MP had been diagnosed with that cancer in the spring of 2019.

This report by The Canadian Press was first published May 5, 2020.