OTTAWA — The Liberal government whip is calling for a fellow member of Parliament to appear before a House of Commons committee to answer for a screenshot he took of a naked Liberal MP during virtual parliamentary proceedings last month.
May 13, 2021 3:13 PM By: Canadian Press 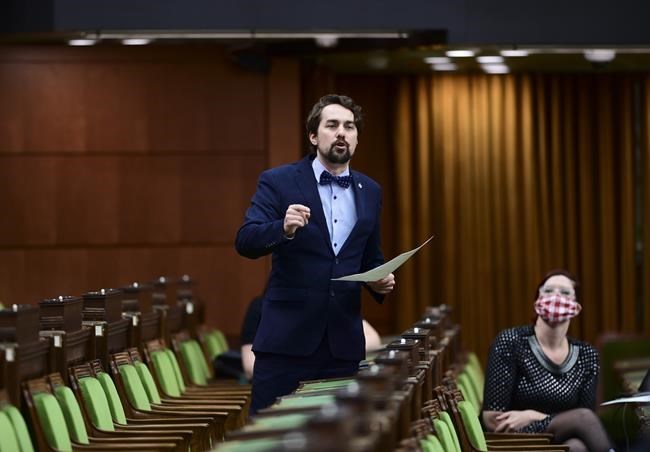 OTTAWA — The Liberal government whip is calling for a fellow member of Parliament to appear before a House of Commons committee to answer for a screenshot he took of a naked Liberal MP during virtual parliamentary proceedings last month.

The image was captured on April 14, when Quebec MP William Amos appeared naked on an internal parliamentary feed of that day's virtual question period, without his image being broadcast on the public feed.

Amos has said he was changing his clothes after a jog and did not realize his laptop camera was turned on.

Bloc Québécois MP Sébastien Lemire has apologized for taking the screenshot of Amos, saying he had no idea how the photo quickly made its way to the media and ended up circulating online around the globe.

At a meeting Thursday of the all-party board of internal economy — the governing body of the House — Liberal whip Mark Holland said Lemire should reveal where he sent the image and what his intent was.

"A member of Parliament and his family had to be subject to his image naked on late-night talk shows in England, in the United States and social media sites around the world," Holland said.

"If this was any other workplace … if an employee took a naked photo of another employee against the will of that employee and disseminated it, I can guarantee you an apology and walking away as if nothing happened wouldn’t be the end of the matter."

Holland, who called the incident "troubling," "terrible" and "entirely unacceptable," put forward a motion to have Lemire appear before the committee behind closed doors, because the matter may involve legal advice or issues subject to solicitor-client privilege.

The hearing then bogged down in debate over whether it should go in camera immediately to further discuss the incident and on whether a recorded vote on inviting Lemire to testify was called for.

Bloc MP Claude DeBellefeuille, the party whip, argued against a vote and in favour of consensus, a principle that the board of internal economy typically aims to adhere to.

"To ask for a vote breaks an important tradition of the only forum in Parliament which is non-partisan, which is to remain above the fray and manage difficult situations," she said in French.

"The board of internal economy is not a court. It’s not up to us to determine intent or not."

DeBellefeuille added that she supports a closed-door session to question Lemire but remains wary of votes to record that position.

Intergovernmental Affairs Minister Dominic LeBlanc, a Liberal member of the committee, highlighted occasions when Conservative and Liberal majorities had forced votes at the board. But New Democrat Peter Julian questioned LeBlanc's "perception of history," arguing that "very, very few votes" have occurred on the relatively collegial panel.

At one point Holland appeared to become indignant at the drawn-out back-and-forth.

“Imagine if this was a female colleague. What would our discussion be?" he asked. "Would a month later we be saying, ‘Maybe we’ll do something about this, maybe we wouldn’t?’”

Eventually, board chair and Commons Speaker Anthony Rota corralled his colleagues into agreement to hash out any legal issues in private at their next meeting before emerging to vote on whether to call Lemire to come before the committee — in camera.

The next meeting will not occur before May 27, according to a Speaker's office spokesperson.