MONTREAL — A Quebec coroner inquiring into the death of an Indigenous woman who filmed herself being humiliated by hospital staff implored health-care workers on Monday to be honest in their testimony.
May 17, 2021 6:01 PM By: Canadian Press 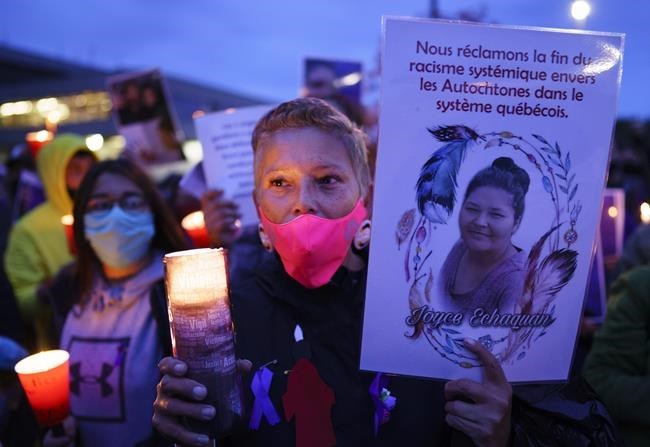 MONTREAL — A Quebec coroner inquiring into the death of an Indigenous woman who filmed herself being humiliated by hospital staff implored health-care workers on Monday to be honest in their testimony.

Géhane Kamel expressed her admiration for front-line workers but urged witnesses to be upfront about the situation at the hospital as she heard from doctors and nurses who said they'd never heard complaints about mistreatment of Atikamekw patients.

Echaquan, a 37-year-old Atikamekw mother of seven, filmed herself last September at the hospital in Joliette, Que., northeast of Montreal, as female staff were heard insulting and mocking her shortly before she died. The video of her pleading for help and being ridiculed circulated widely on social media and prompted widespread indignation across the country.

The version the public inquiry heard from hospital staff contradicts testimony from Echaquan's family members, who said last week that she and other people in the community feared going to the Joliette hospital for treatment.

"I prefer that people be honest," Kamel said. “We’re not conducting a trial, we are trying to understand."

Kamel said she has a hard time believing testimony that Echaquan's death was never discussed among staff and that none of the witnesses Monday had heard disparaging comments about Indigenous patients.

“As long as people are going maintain positions that are diametrically opposed — that is, one planet where everything is fine and a community that says, ‘I don't want to go to the hospital because I'm afraid of the nurses,’ well reconciliation will never happen, even if you have all the best training in the world," Kamel said.

Two doctors and three nurses who treated Echaquan at various points testified on Monday, with the nurses' identities covered by a publication ban.

One nurse said her job was to provide care, and her patients' race or background was not a consideration. She told the inquiry that staff didn't discuss Echaquan's death afterwards. She said the video Echaquan filmed spoke volumes and there was nothing more to say.

At one point, Kamel wondered openly if the nurses had been coached to say the least amount possible. More nursing staff are to testify on Tuesday.

Earlier Monday, a doctor who treated Echaquan the day before she died said he thought she was suffering from opioid withdrawal. Echaquan was transported to hospital from Manawan, Que., on Sept. 26, with severe stomach pain, and she died two days later.

Dr. Jean-Philippe Blais, a gastroenterologist, told the inquiry that on the night before Echaquan died, she was agitated and told him she was taking opioids. He said he thought she might have developed a dependency and was exhibiting withdrawal symptoms.

Blais told the inquest Echaquan had been hospitalized in Montreal in 2020 with similar stomach problems. He said he scheduled a colonoscopy to determine the source of her pain but she died the next day.

A lawyer representing the Atikamekw First Nation asked Blais whether he thought he had made the wrong diagnosis.

“It’s the question I ask since these events, coroner’s inquiry or not,” Blais responded, adding that he might have changed his diagnosis had more information been available.

“But I think at the time, I did the maximum I could to treat her," he told the inquiry.

Blais said he still doesn't know what killed Echaquan, eight months after her death. "I still don't understand what happened, and it's something that saddens me, that we don’t have answers for everyone who knew her," he said, adding that the way she was treated was unacceptable.

"It should never happen in a hospital," Blais said.

Kamel is presiding over public hearings taking place in Trois-Rivières, Que., which are scheduled to run until June 2.

This report by The Canadian Press was first published May 17, 2021.